Most people, especially its long suffering residents, are familiar with the John Betjeman poem ‘Slough’. Betjeman published his poem in 1937, when creeping industrialisation and hemmed in housing projects made Slough appear to him to be cramped and sterile, while the factory managers were portrayed as oppressive and crude and the clerks and their families as facile lovers of modernity who had lost touch with the natural world, in favour of labour saving devices and crass popular culture.

‘Come, bombs and blow to smithereens

How ironic that a ‘friendly bomb’ really did fall on Slough, damaging the aluminium factory that was at the centre of his little rant.

On 15 July 1940,  Marshal of the Royal Air Force, Sir Cyril Newall, the Chief of the Air Staff, opened Churchill’s War Cabinet meeting by reporting that a pilot had admitted that, while returning from a mission on July 13, one of his bombs had fallen out of his plane and had scored a direct hit on the Aluminium Works at Slough.

This blunt statement caught my attention while I was preparing the UK War Cabinet twitter feed, which reports on the progress of the Second World War using the minutes and memoranda of Churchill’s War Cabinet in ‘real time’ tweets reported 70 years on. Intrigued, I decided to find out what I could about the case and why it was that nobody seemed to know about this most famous of ‘friendly bombs’.

Newall was immediately appointed to investigate the incident, beginning what would become a collection of contradictions.

Conclusions of a meeting of the War Cabinet held at 10 Downing Street, on Monday 15th July at 12 noon. Catalogue reference CAB 65/8/6

Papers relating to the investigation were gathered together into a file which was given the name ‘The Slough Bomb Mystery’ and may be found in The National Archives under the reference AIR 8/356. While originally classified, the file was downgraded to ‘open series’ in 1968 and was transferred as normal under the 30 year rule, becoming available to the public in January 1971. 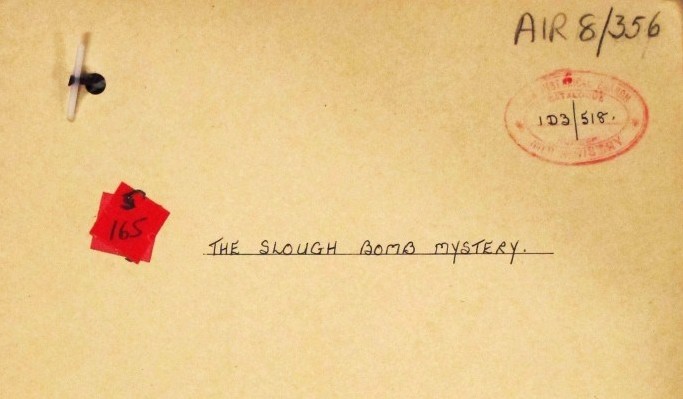 The file opens with the two official reports of the events of the night of the 13/14 July 1940, Home Security Intelligence summary no. 630 and a Home Security War Room report (HSWR 20) of 14 July.

The first report states that ‘extensive damage was done at High Duty Alloys Ltd, Slough, by an explosion at 23.10 hours, thought to have been caused by a bomb dropped accidentally from a British aeroplane. Full details are not yet available but the casualties are believed to have been one killed and thirty injured.’ The second report adds ‘I have ascertained from Fighter Command that it is most improbable that any enemy aircraft was in the vicinity of Slough at that time.’ Both reports were signed by the Duty Group Captain at the Home Security War Room.

A secret note accompanying the reports, initialled D.D.H.O, suggests that the Fighter Command statement that they had no record of any tracks in the neighbourhood of Slough during the night of 13/14 July referred to both British and enemy aircraft. ‘Bomber Command were not consulted regarding the movements of their own aircraft on the night in question. Enquiry shows that no aircraft of Bomber Command were in fact in the neighbourhood of Slough during the night 13th/14th July’.  But how could that be, since a pilot had already admitted to being in the area and to unwittingly dropping a bomb? The note concludes ‘In view of the fact that HSWR20 is not an official summary … no investigation of the matter has been made by the R.A.F’.

On 15 July Sir Alexander Maxwell, the Permanent Under-Secretary at the Home Office sent a minute to the Home Secretary, Sir John Anderson, reporting on a visit to High Duty Alloys by Colonel Thomas, Chief Inspector of Explosives. Thomas had been despatched to Slough to ascertain whether the explosion could have been the result of sabotage. The first thing that Colonel Thomas did was to speak to a local resident, who told him that an aeroplane had been seen over Slough around the time of the explosion and that this aeroplane had been caught by the searchlights and that it had given the British signals. Thomas also reported that the same story was told to him at the factory.

Colonel Thomas then went on to comprehensively exclude the possibility of sabotage. He stated first that in the concrete floor of one of the bays of the factory a large crater had been caused which went deep into the clay beneath. The crater appeared to him to be typical of a bomb crater. To cause a crater of this size (13 x 10 feet across and between 5 and 6 feet deep) it would have been necessary to insert the charge under the concrete floor and any attempt to do so would have been observed. Moreover, there was incidental evidence that the explosion must have been produced by a bomb. Parts of the iron grid running across the concrete floor were found at the bottom of the crater, which also contained part of the overhead crane. As Thomas concluded, ‘a bomb falling from above could have carried these pieces down into the crater, but if an explosion had taken place under the floor these pieces would have been blown to a distance.’

Moreover, if a saboteur had wanted to damage the factory, they could have chosen many better spots. Only parts of the factory were out of action, and even then only for four days, meaning that production was hardly affected. A member of MI5, Sir Francis Griffiths, who had accompanied Colonel Thomas, thought it unnecessary to carry on any further investigation. Although Colonel Thomas believed that by digging in the hole it would be possible to discover the parts of the bomb and so prove beyond doubt the type of bomb, he felt that it would probably be necessary to dig for some considerable distance into the clay. Sir Alexander Maxwell reported that ‘as there seemed to be no doubt about the bomb, and as the factory Management were most anxious that there should be no delay in getting the shop into action, Colonel Thomas did not ask that digging should be undertaken.’ At the foot of the report Sir John Anderson noted ‘this seems quite conclusive.’

On 19 July, the Chief of Air Staff, who had been asked by the War Cabinet to investigate the circumstances in which a bomb fell at Slough, asked the Head of Fighter Command, Sir Hugh Dowding to provide an explanation for the information of the War Cabinet. One could argue that it makes sense that if an offence has been committed by Bomber Command, you would ask Fighter Command to investigate, and vice versa. This would ensure impartiality but it would also distance the investigation from its probable cause.

Dowding replied on 23 July, stating that the Observer Corps post in Slough had no records indicating the presence of aircraft which might have dropped the bomb, although they did hear the explosion. He also reported that he had been unable to find any indication that the presence of aircraft was detected by other personnel such as AA guns and searchlights. He added that there were two X-raids over the sea which would have had time to reach Slough at 23:05. X-raids was the term for unidentified aircraft which had been detected by the Radar Defence Force or the Observer Corps. Dowding concluded that either the bomb had not been dropped by an aircraft or that if it had the aircraft had been flying so high as to be beyond the range of detection by sound, thereby creating a mystery out of a case that had already been solved. Adding an extra layer of confusion he observed ‘Personally, I am inclined to suspect the IRA.’

Air Vice Marshal R H Peck  wrote to Dowding on 23 July telling him that he had information which may throw a little light on the subject. A friend of his, Sir John Reith, who lived within five miles of Slough, happened to have a former Observer Corps officer, Colonel G.C.K. Clewes, staying with him. Clewes, who through experience had no problem distinguishing between the noise of German and British aircraft, was out in the garden at the time of the explosion. Reith reported to Peck that Clewes identified the note of a German aircraft at great height, before becoming aware that a bomb had been dropped. Peck stated that as Reith was an Old Wykhamist, (a former pupil of Winchester College) ‘that will lead you to take a favourable view of his judgement and veracity.’

In the minutes that conclude the file on Slough, Peck notes ‘The bomb which fell on the works at Slough bids fair to become a mystery of the air comparable only to that of the famous Marie Celeste at sea!’ He states that a few fragments of the bomb had been sent to Woolwich for examination, but that they had been quite unable to associate those fragments with any known bomb. This left them with a bomb which could not be identified, dropped by an aircraft of which they had no trace. A later minute suggests that, if pressed by the War Cabinet, they would put forward Dowding’s solution that if the bomb was dropped by an aircraft it must have been flying at an incredible height, and that accordingly the strike on the Aluminium Works was a stroke of chance. In this way they would not need to draw attention to flaws in the air defences and air intelligence system.

As it turns out, the question was not raised again by the War Cabinet. No doubt Churchill was appraised of the situation in private. But why go to such lengths to obscure a situation that could have been resolved by questioning the pilot in greater detail? Perhaps the War cabinet decided that it was not in the public interest to draw any attention to this incident. High Duty Alloys produced aluminium parts for aeroplanes including, possibly, the very plane that was responsible for this unfortunate calamity. The incident took place at the start of what would become known as ‘the Battle of Britain’ and public morale was strong but could easily be shaken. It would be bad enough to suggest that Britain’s air defences and early warning systems were not up to the task, but to suggest that a further danger could be posed by our own aircraft might create unnecessary alarm. A large proportion of the public would have been aware of Betjeman’s poem and any publicity would have handed a propaganda victory to the Germans at a very sensitive time.