Stories of women ‘masquerading’ or cross-dressing in men’s clothing were widely reported by the press in the United Kingdom at the start of the 20th century. One such ‘news story’ told of the ‘unscrupulous and profound actions’ of Colonel Victor Barker.

Before I introduce you to Barker, I should explain how I will be referring to them. To my knowledge, Colonel Barker left no personal archives, so it is difficult to assume the reasons Barker felt compelled to cross-dress and to live as a man. Therefore I will be referring to Colonel Barker as ‘he’ (him, his), and to Lillias Irma Valerie Arkell-Smith as ‘she’ (her). In doing so, I will hopefully do justice to this fascinating person. 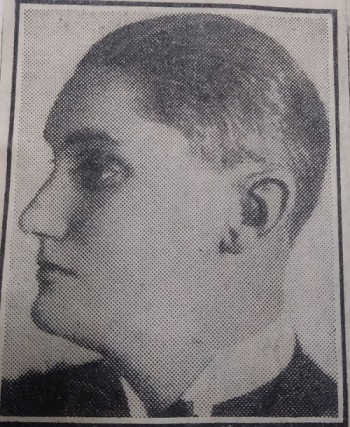 Colonel Barker was an alias of Lillias Irma Valerie Arkell-Smith (birth name Barker), who was born on 27 August 1895. In fact, it was one of many aliases used during his life. It was commonplace for individuals who lived as the other gender to use several names, in order to protect themselves and to live as their chosen gender.

Before becoming Colonel Barker, Valerie was a daughter of respected parents, educated in England and Belgium. In 1914, as Britain declared war on Germany, she worked in a hospital as a member of the Voluntary Aid Detachment (VAD), where she often faced the limitations of her sex and was not able to partake in activities she wanted to. This changed in 1918, when she started working on an estate in Kent and later enrolled in the Women’s Royal Air Force (WRAF), becoming a motor transport driver. Army uniforms had one advantage for her – they hid one’s femininity – and, together with the use of male nicknames, Valerie felt able to live as a male recruit.

As a privileged class volunteer of VAD, Valerie Barker was admired by men; however, as the war went on, such admiration was often in short supply. Valerie married her first husband, Australian Lieutenant Harold Arkell Smith, on 27 April 1918. Unfortunately the marriage did not work, and after only six weeks Valerie fled home to her parents. Her father died soon after; following the disbandment of the WRAF, Valerie began working with a friend in a tea shop in Westminster, where she met Ernest Pearce Crouch – another Australian man who became possessive and abusive towards her.

Although they never officially married, they lived together as a married couple. Pearce Crouch managed to obtain a passport for both him and Valerie, and in 1919 they moved to Paris where they had two children. After returning from Paris, they lived on a farm and it was here, in 1922, that Valerie met Elfreda Emma Haward for the first time.

Her husband was a woman

Elfreda and Valerie became friends and in 1923, following Valerie’s estrangement from Pearce Crouch, they began living together. It was during this time that Valerie decided that her future would no longer be female; she was giving up on unsatisfactory marriages and putting her life back on track. In her own words, she felt helpless living as a woman, as she could not do what she wanted:

Taking back the family name, Valerie became Sir Victor Barker and started a new life with her partner, Haward. Although Haward met Barker when he was living as a woman, Barker told her that he was wounded during the war, sustaining an injury to his abdomen. You may be wondering how was it possible that Haward ever believed Barker, but the pair started living together in the Grand Hotel in Brighton. Under pressure from Haward’s parents, who thought Sir Victor Barker was a man, the couple married on 14 November 1923. 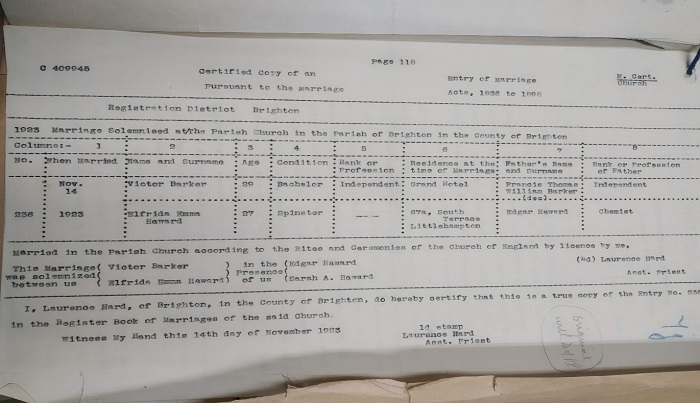 A picture of the marriage certificate between Victor Barker and Elfrida Emma Haward from November 1923, HO 144/19128

It was never clear whether Haward did or didn’t know Barker’s secret. After the honeymoon period was over, Victor began working for the Brighton Repertory Company, where he played only male roles. He also joined the local cricket club and took on the name Captain Barker.

His life became more and more expensive: he spent money he didn’t have on male clothes, and he started calling himself Ivor Gauntlett – until 1925 when he changed his name back to Sir Victor Barker. His expensive lifestyle lead him into debt and a first prosecution. He broke off his marriage with Haward in 1926.

Have you reached your verdict?

Barker appeared in court several times – most notably in 1927, after joining the National Fascisti movement and being prosecuted under the Firearms Act. In January 1928, Victor Barker promoted himself to Colonel. Together with his new partner (an actress), he spent the money received following the death of his brothers on premises for a new business – the Mascot Café.

This was the nail in the coffin for Barker, as the business performed badly, leading to bankruptcy and another lawsuit. It was this bankruptcy lawsuit that led to Colonel Barker’s imprisonment in Brixton prison, where his ‘true’ gender was discovered. In his own words:

On 25 April 1929, Barker was prosecuted at the Old Bailey for perjury – for submitting false information on a marriage certificate – to which Barker pleaded guilty. The judge, Sir Ernest Wilde, decided to ignore the previous lawsuits and focus on the act of perjury. The court was full of women, to the extent that there were even rows of chairs outside. Barker’s sentence was set at nine months. 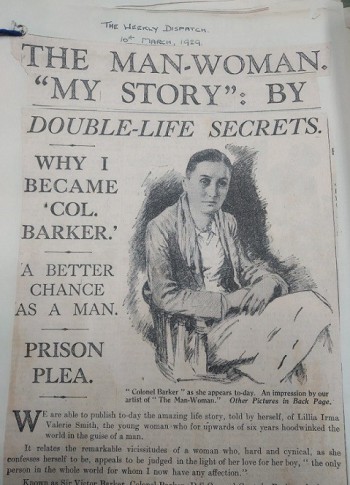 Sir Ernest Wilde’s concluding remarks painted Barker as an evil person who, if unpunished, would lead others to follow his example. He described Barker’s actions as unprincipled, mendacious and unscrupulous, and Barker as someone who had outraged the decencies of nature and broken the law of man.

These words broke Barker’s composure. As he bowed his head, he was overcome with sadness – his entire person looked grey and despairing, except for the bright red rose in his buttonhole.

Colonel Barker was prosecuted for being different in a society in which it was unacceptable to stand out. He was being held to account for choosing to live differently. He is just one example of the many gender-different individuals prosecuted, either under the Perjury Act or under the Metropolitan Police Act, for a breach of the peace; however, the act of cross-dressing or wearing the opposite gender’s clothes was not illegal in the United Kingdom.

Colonel Barker was one of the many pioneers who stood their ground and lived their lives under the gaze of public scrutiny. His actions, together with his peers’ and successors’, influenced the creation of the Gender Recognition Act (GRA) in 2004. This legislation helped many people, but its archaic form led to the consultation of the GRA in late 2018.

After his release from Holloway prison, Colonel Barker went on to write several articles for the Sunday Dispatch describing his life and future.

We are delighted to be hosting P E Szoradova, who is a student at Goldsmiths, University of London, currently studying for their MA in Queer History.