February is LGBT History Month. LGBT history is often hidden but there are a wide variety of books on the history of these communities in The National Archives’ Library. Male homosexuality was illegal until the 1960s and there are plenty of criminal records to use in researching this subject and a significant amount of books. This is not the case for female homosexuality which was not officially criminalized. Despite this, however, there is a range of sources available to support research on homosexuality amongst women, bisexuality and individuals that identify as transgender.

Until 1861 homosexuality was a crime punishable by death in England, and especially in the early modern period it was more often called ‘sodomy’ in reference to the corrupt inhabitants of Sodom and Gomorrah who were punished by God in the Bible. The book Homosexuality in Renaissance England explains how homosexuality was seen as against the natural order of things and God’s law, and was often analogous to the witch or papist hate figures in England in the sixteenth and seventeenth centuries. In times of social change prosecutions for homosexuality increased, and it is often argued it was not until the eighteenth century that a recognisable gay subculture emerged.

I found the wonderfully titled Mother Clap’s molly house fascinating. It details how ‘molly’ became the term for gay men in the eighteenth century  and ‘molly houses’ were places they could meet for sexual liaisons but also for drinking, dancing and friendship. The houses were a support network against an antagonistic world, and out of this a subculture was created with its own language, gestures and ways of dressing. Our knowledge of Mother Clap’s molly house comes from the fact it was raided by police in 1726 and the subsequent trials of the men caught there. Three were eventually hanged at Tyburn.

In the nineteenth century prosecutions for homosexuality increased. The book Nameless offences provides detailed research on the prosecutions for sodomy and the double lives many had to lead, including the threat of scandal and blackmail this could involve. 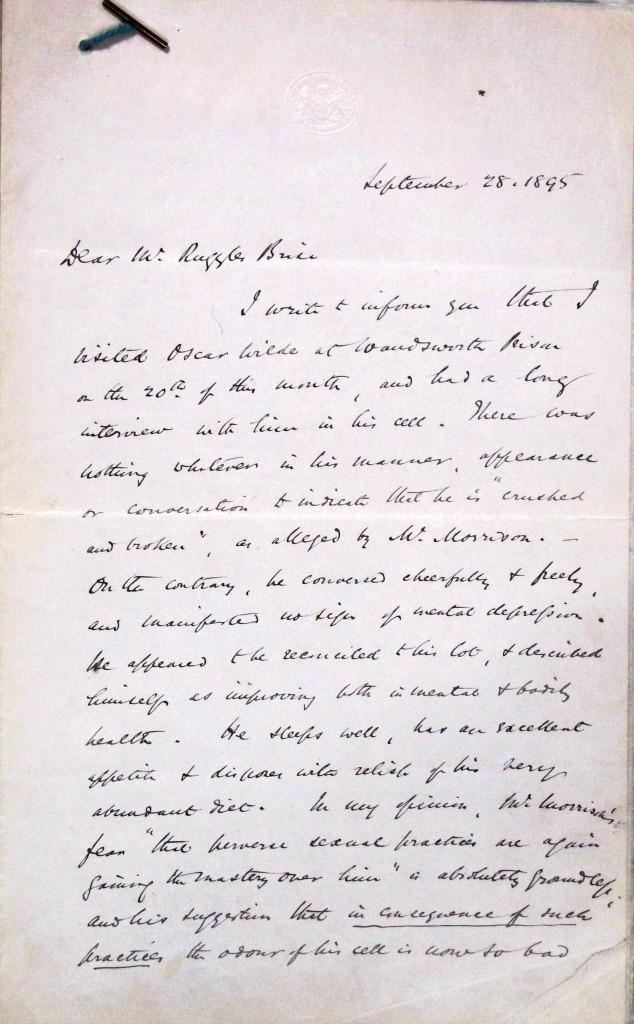 Letter about the welfare of Oscar Wilde in prison, catalogue reference: HO 144/8/432

According to Jeffrey Weeks in Coming Out,  by the end of the nineteenth century the image of the Victorian family had become fixed in many peoples’ minds and homosexuality was seen as opposed to this ideal. A series of high profile scandals helped create a moral panic about homosexuality and in 1885 section 11 of the criminal law amendment act was passed. It was also known as the Labouchere Amendment and made ‘gross indecency’ a criminal act. It didn’t define the term ‘gross indecency’, and in practice the law was often used against homosexuals. This act became known as the ‘blackmailer’s charter’.

The next 80 years or so involved various strategies of resistance, concealment and attempts at reform of the law. Through the efforts of the Homosexual Law Reform society founded in 1958, individual efforts and a more affluent society in the 1960s that broke down traditional conservative values, a more liberal society emerged. Out of this the Sexual Offences Act of 1967 became law which decriminalized homosexuality for adults over the age of 21. Out of the past chronicles the more recent developments in the gay community including gay liberation, music, fashion, the AIDS epidemic and same-sex marriage  and The greatest taboo focuses on the experiences and challenges of being black and gay or lesbian within different cultures.

Although lesbian history is often perceived as very hidden there are a surprising number of records and books to be found. As relationships between women were never illegal in England, books such as Gay life and culture: a world history provide many examples of women living from the fifteenth to nineteenth centuries as men, wearing male clothes, working in male jobs and being ‘female husbands’. One woman, Katherina Hetzeldorfer, who was discovered living like this in 1477 was sentenced to be drowned. Another, Catherine Margaretha Linck, a Prussian woman was beheaded in 1721 for living as a man and for being married to a woman. She was the last woman in Europe to be executed for such ‘deviant’ behaviour.

I found A lesbian history of Britain very illuminating and full of detailed histories, such as the Yorkshire woman Anne Lister’s diaries which provided written evidence of her relationships with women in the early nineteenth century. By the beginning of the twentieth century this book also reveals that an attempt was made in 1921 to introduce a clause into the Criminal Law Amendment Bill which would criminalise sexual relations between women, as was the case with male homosexuality. The reason the bill was rejected was that it was believed it would do more harm than good by making the public more aware of the possibility of women having sexual relations. 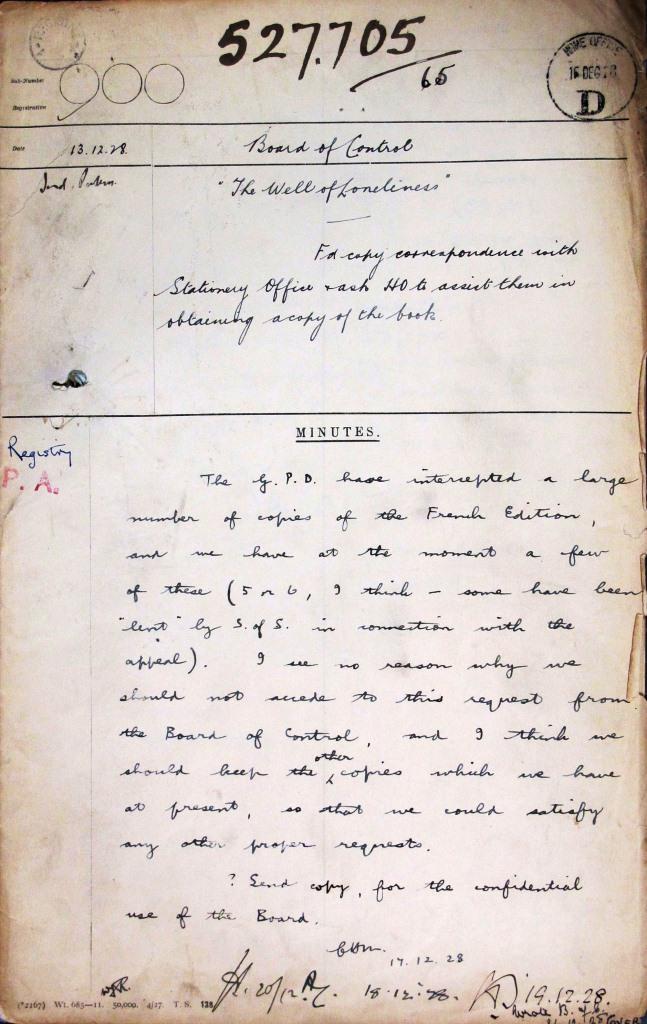 Confiscation of The well of loneliness, catalogue reference: PCOM 8/432

Fashioning Sapphism explains the importance of the novel The well of loneliness by Radclyffe Hall.  The novel is about lesbianism or ‘female sexual inversion’ as it was then sometimes called, and was a plea for tolerance. It was published in 1928 and received some positive reviews, but the editor of The Daily Express believed it was a controversial book that should be suppressed. His campaign against it eventually led to the book being banned for obscenity and copies of it destroyed. It was not until 1949 that it was published again in Britain. The press coverage surrounding the obscenity trial helped to give more publicity to lesbianism and the book became one of the few well known titles on the subject.

The Lesbian history sourcebook gives a wide range of information for lesbian history drawn from literary sources, court records as well as letters and diaries. Out of the past is again very helpful on lesbian subculture including music, fashion and literature.

There are fewer secondary works on transgender history, however this seems to be slowly changing. The book Fanny and Stella about two gay men living as women in the nineteenth century is more about cross-dressing than transgender although Stella was known as an effective ‘female impersonator’. Both men were arrested and accused of committing homosexual acts but were acquitted. On Thursday 19 February we have a talk by the book’s author Neil McKenna that will explore the context of this book. A recent addition to our Library, The first lady, is the intriguing story of April Ashley, a beautiful Vogue model in the 1960s who was hiding the secret that she had been born a man and had undergone pioneering surgery to become a woman. It is worth reading to get a personal perspective of how traumatic it was for April to be born in the wrong body.

There are no books in our Library explicitly about bisexuality , however it falls into many other books. In times when homosexuality was illegal it is very difficult to know if someone was bisexual. Was Oscar Wilde, married to Constance for 14 years, bisexual? Or was he married because society at the time did not accept the love he felt for men? Historical hindsight makes it impossible to know. However, bisexuality is mentioned within books such as The worst of crimes where it is suggested that in the Tudor and Stuart era bisexual men were tolerated (especially if they were upper class) more than homosexual men who were often seen as completely ‘deviant’. Bisexuality could sometimes be seen as evidence of a free spirited, artistic persona as stated in Gay life and culture – but also in many cases a man who was conventionally married but conducted sexual relationships with men may just have been using his married status to hide a secret that if revealed could cost him his livelihood, children and occasionally his life.

I hope this blog post has shown the range of books in the National Archives Library on LGBT and  how changes in the law, society and culture have affected these communities.