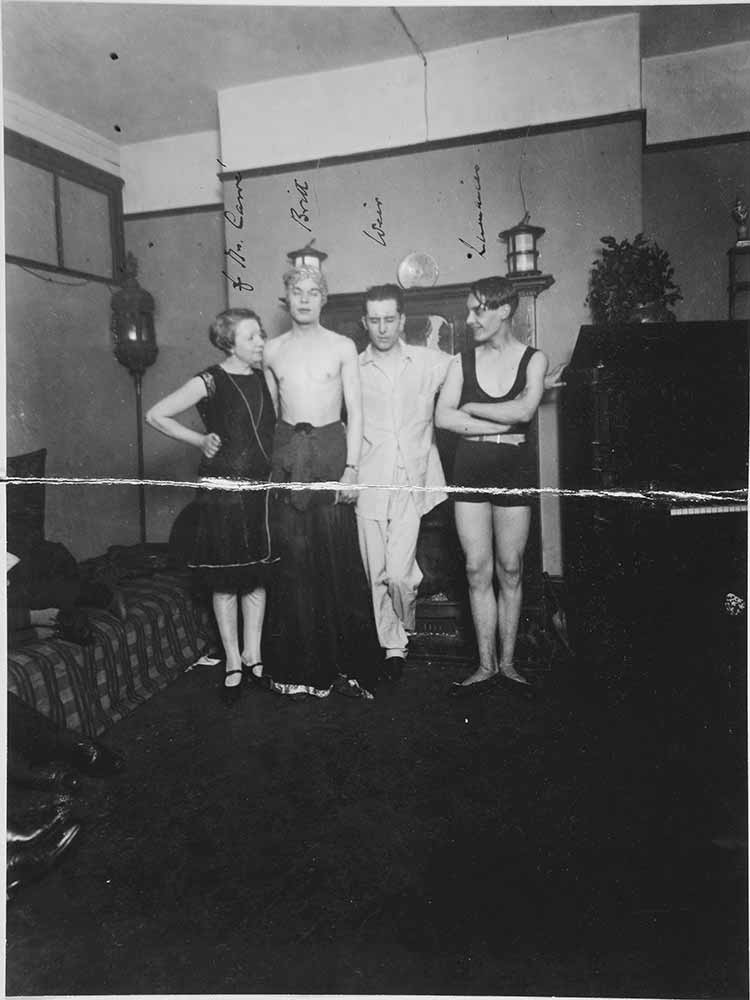 Police photograph provided as evidence for 1927 criminal session where individuals were being charged with keeping a disorderly house, at Fitzroy Square, London. (CRIM 1/387)

This workshop provided a fascinating insight into the ways archival material can be used creatively. It was facilitated by Evlynn Sharp, who worked previously with The National Archives and HMP Lewes on the Unlocked Reflections project.

The creative workshop used both facsimiles and originals of archival material to inspire creative writing. The event had a safe, comfortable space for sharing our writing, and we used the documents and group discussion to prompt our thoughts. This was followed by time for free writing, which is continued writing on the page without stopping.

First, we looked at police photos of people in Billie’s Club in Soho, after a raid by plain clothed police officers in 1937; they were charged with being a ‘disorderly house’. At this time, homosexual sex between men was illegal.

Though it is a criminal record, we discussed how it still gives an insight into what it might have been like on the gay social scene at this time. It illustrates the risks involved, but also the fun that could be had. 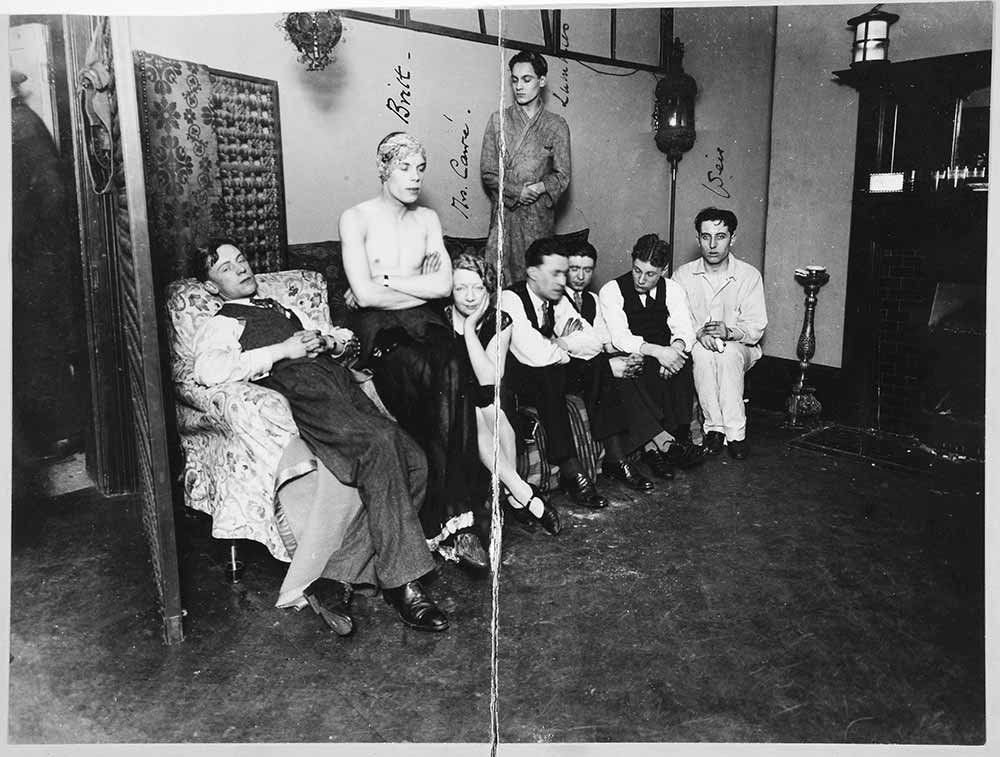 Police photograph provided as evidence for 1927 criminal session where individuals were being charged with keeping a disorderly house, at Fitzroy Square, London. (CRIM 1/387)

One of the responses by Katherine captured the excitement and nervousness of discovering the club for the first time:

I remember walking and walking – is this the right place? And they say Denmark Street, or was it Court?  I’d overheard two clerks from the post room whispering in the stairwell. I’m sure they are like me. Millicent in accounts says they are like me…

A large green door swings open and out stride oh such a pretty boy, beautiful, elegant but then he falls to the floor, more than one too many brandies sweetie.

I go to help him to his feet, take a deep breath and ask – is this Billies Club? No, he coughs, relighting his cigarette – ‘no, it’s heaven on earth’

Alternatively, Gavin imagined what it might be like to be a policeman in Billies Club, observing night after night, surrounded by happy dancing people:

‘Do they know? Do they know I am here? Is that why they do not do what is said of them? I watch waiting for them to go out round the back. But they don’t. They are dancing and drinking. Why am I here? I am wasting my nights. Night after night watching and waiting but nothing ever happens. And in my life too. Nothing ever happens.’

Mo took the emotional angle of meeting someone at the club and falling for them:

‘I remember him well. He looked at me hopelessly, as if I represented the uncertainty of death. I wanted to convey to him that he was safe, without having to say so explicitly, for obvious reasons. I looked back at him sternly, and could not see his despair washed into the reflection in his grey-green eyes. Then I started to feel by osmosis his sense of despair, which I started to absorb like water into a thirsty sponge, and saw a new side, one of desperation, and my heart began to swell and my eyes fill with fluid. His pale and silken complexion looked whiter then than it did in the few minutes before when I first saw him. His feminine jawline and masculine brow juxtaposed each other in a genderless stare. I remember him well.’

The second exercise focused on a letter found in the Caravan Club in 1934, preserved within a Metropolitan Police file. The Caravan Club was a private members club prosecuted for being a ‘disorderly house’ (essentially a brothel). A card describes it as ‘London’s Only Bohemian Rendezvous said to the most unconventional spot in town’.

On 24 August 1934 the police raided the property; following this, a letter was found from Cyril d’Leon. It revealed that Cyril ‘honestly hoped to have an affair’ with a man, ‘Billy’. 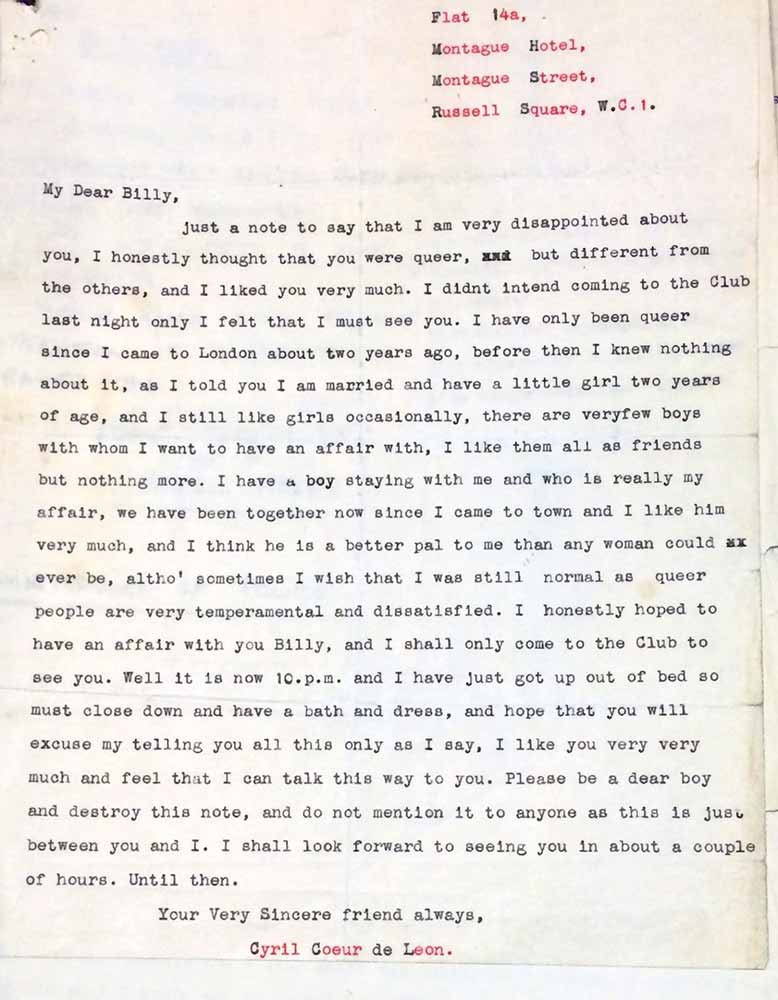 Letter found in relation to a raid on The Caravan Club, 81 Endell St, WC1

This letter prompted much discussion, and an imagined response by Mo:

I am touched by your words, but I am afraid you are right, I am not a queer. I am sincerely flattered that you would think of me that way, and think of you as a dear friend. I appreciate your thoughts of me as different from the rest most of all.

I go to the Caravan for the ambience and for the sheer fact that I can, that we live in this wonderful city and are free to do as we please, despite what the law says, or indeed, the Lord. I have met many dear people at the Caravan, and count you the dearest of them all. I do not judge you for wanting an intimate relationship with a man, for through visiting the Caravan I have come to accept all people for who they are, but must reiterate that I am not homosexual.

Alas, you must find another man, a queer, to whom you can affix your attraction. I sincerely hope you can do that, and will be waiting at the Caravan at the usual time tonight.

I hope you can forgive me, and please be careful.

The nerves of seeing someone you like and not knowing how they will feel particularly struck a cord. When Cyril turned up to the club after sending this letter how did Billie greet him? 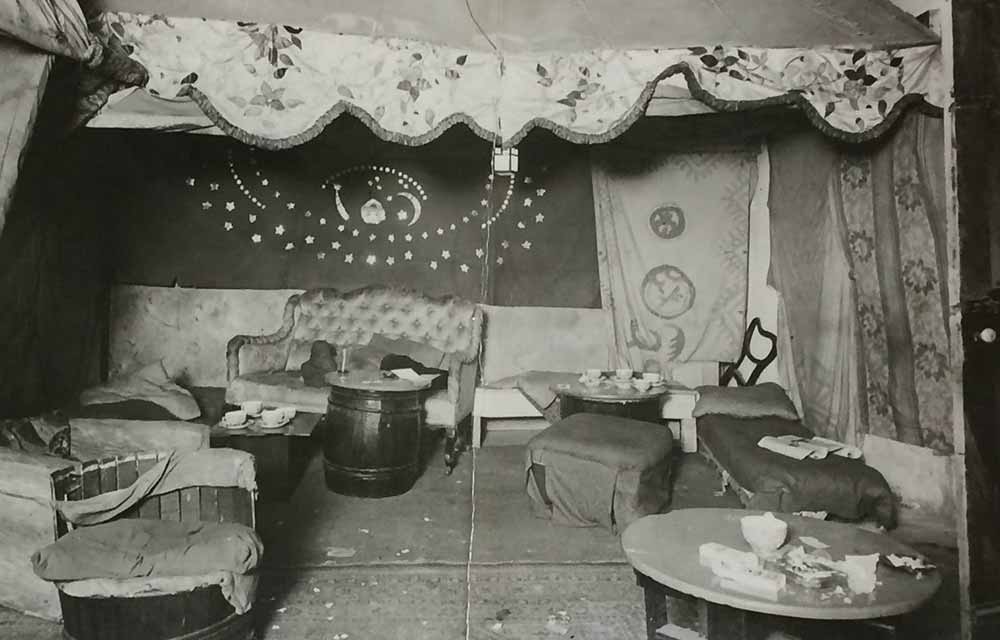 Photograph of the interior of the The Caravan Club, 81, Endell St

We discussed the similarity of sending a text message and nervously waiting for a reply. Gavin’s writing captured these feelings:

‘The critical time of 10pm, when my day starts. I am getting ready to go out to the club to leave my lad and go out to play. Will he have got my note? What will he think of it? Will he be there? Will I see him again?

In this club I can truly be myself. To this man I can tell my secrets. I can tell him, he understands and no-one else will ever know.

It is 10.45; I have showered and got dressed, done my hair and put on my aftershave. I want to look my best for him. I want him to notice.

I open the door and move through the darkness. I see him at a table waiting I can see the note in his coat pocket, he has not destroyed it. But I am with him and do not care.

It is 3am, we are leaving. We have been leaving for half an hour now. We live in opposite directions. When we start to walk will it be together or our separate ways?’

‘Please be a dear boy and destroy this note’

The group latched on to the words that finish the letter: ‘Please be a dear boy and destroy this note’. And yet here we were 90 years later reading Cyril’s words, which have been preserved in the archives. There was a clear sense of the letter as a rich source of history, and yet a sense of uneasiness that it has been preserved against someone’s will.

Katherine’s piece powerfully discussed the vulnerability of men writing down their feelings for men in this period.

‘By 3am I was still only half way home to the Montague. I slumped, sobbing in a door way. What a mess.

Pouring my heart out, saying it out loud felt free, alive and when I saw him read the note I saw him smile. I thought yes, I knew it, he does feel as I do. He came over to where I stood at the bar and clinked my glass and nervously I lit his cigarette waiting for him to say the first word. “Five pounds” he said. “what?” I spluttered. “Five pounds unless you want this filth to go to the Police. Or your wife.”‘

These pieces are just some snippets from our LGBT creative writing event. We would love to hold more creative workshops – please comment below if you would be interested in coming to one.