Let it snow (in the UK Government Web Archive)

With one week to go until the big day, it’s definitely time for us Brits to start wondering whether or not this Christmas will be white. Until I started my research for this post, I hadn’t realised that the official definition of a White Christmas had changed. I thought snow still had to land on the Met Office building in London, but it seems that several other locations now count. Fortunately, there’s a full explanation on the Met Office website which will, of course, be captured for permanent preservation and made available in the UK Government Web Archive.

Anyway, I am now well over 30 and can’t remember ever experiencing snow on Christmas Day in London. This, combined with the bright sunshine and warm temperatures of the past few weeks, cause me not to hold out much hope for this year. Not to worry, though – there’s plenty of snow-related content in our web archive.

Now, I like snow. It makes everywhere look nicer – even the car park opposite my flat – and building snowmen is fun, but I also accept that it can make life difficult. As you might expect from a government web archive, much of our snow-related content is advice and guidance about getting safely through the adverse weather. For example, this snapshot of the Directgov website dated 30 November 2010 features the headline ‘Freezing Britain’ and contains links to advice about dealing with very cold weather. 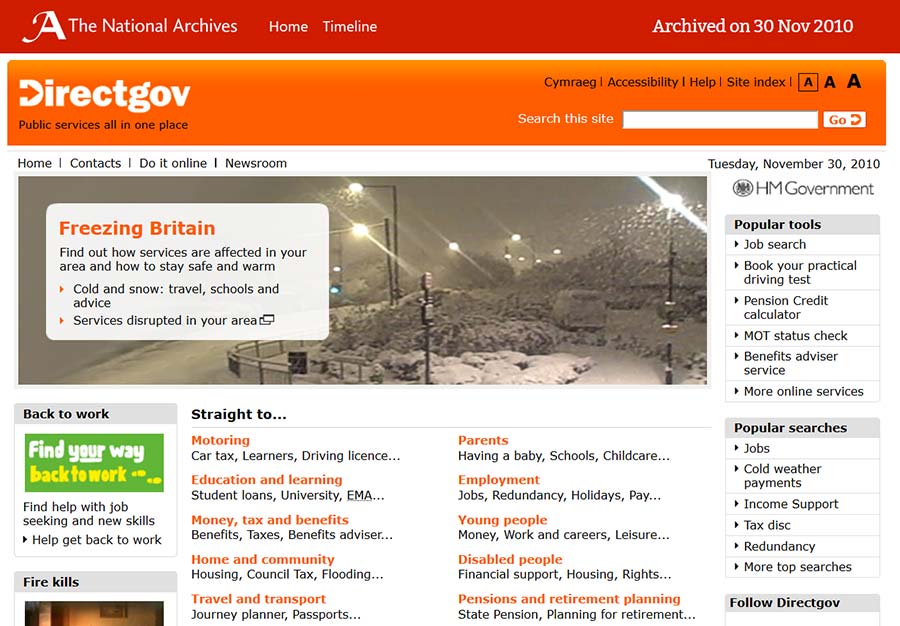 One of the great things about the web archive is seeing how the way government uses the web has changed over the last 20 years. In many cases, the government provides information about the same topics for many years, but the way the information is presented changes.

… to this page entitled ‘Clear snow from a road, path or cycleway’ captured as part of GOV.UK in November 2018.

Something which is, quite appropriately, missing from the guidance pages can be seen in this snapshot of the British Geological Survey website from December 2010: animated snow!

I’m pleased it’s been captured and will be preserved permanently in the UK Government Web Archive. I’m equally pleased that the similar effect used in the snapshot of the Royal Parks website from 2011 is also in our collection:

I guess the reason we’re so fascinated with snow in this country is that we see it so rarely. If the UK doesn’t provide enough snow for your needs, we hold snapshots of the British Antarctic Survey website dating back to 2004 and, unsurprisingly, they feature a lot of snow. Also, it previously included a ‘Penguin of the Day’ feature, which included images like this:

If you like images of penguins as much as I do, many more are linked to in this set of search results.

I hope you enjoyed my seasonal post. If you now feel inspired to see what else is held in the UK Government Web archive, it can be access through our full text search facility: https://webarchive.nationalarchives.gov.uk/search/.

During the past nine months we’ve focused on turning the findings from user research we carried out in late 2017/early 2018 into improvements to the web archive service. We’d be extremely grateful if you could spare two minutes to complete our user survey to let us know how we’re doing.

Thank you. I hope you have a great festive break!