Photograph by Cecil Beaton, left hander, of a street in the Holy City of Beneres, India; Catalogue ref: INF 10/373

I’m a southpaw, a leftie, gibble fisted and dolly pawed, to name just a very few of the titles bestowed on people like me. I am also possibly even a witch, I am certainly sinister!  I’m thought to be more creative, have more special awareness and be less analytical than my right handed brothers and sisters.  I would like to point out that I am also perceived to have a one point higher IQ than my right-handed counterparts (my colleagues might disagree though!) I’m left handed.

Negative connotations have always surround the word ‘left’. ‘A left handed compliment’ is considered to be unpleasant and insulting, and in French the word ‘gauche’ not only means left but is also used to mean socially awkward and clumsy. The Romans thought that being left handed was unlucky. The Latin for ‘left’ is ‘sinister’, and the modern meaning of the word carries connotations of something of evil design, with undercurrents of menace. In contrast, ‘dexter’ which means ‘right’ gives to the English language the words dexterity and dextrous, meaning skilful.

So as today is National Left Handers’ day, it made me think about what documents we hold here in The National Archives regarding this different, but I like to think slightly superior, ‘affliction’.

In heraldic terms the female line is always shown on the left or sinister side of a family’s coat of arms, while the male side is always the right or dexter side. We hold here at The National Archives the counterseal of Catherine of Braganza, wife of Charles ll, from 1698 (DL 26/100/3248). The catalogue description of the seal design states ‘Scrolled shield of arms supported by a lion on the dexter side and a dragon on the sinister’. 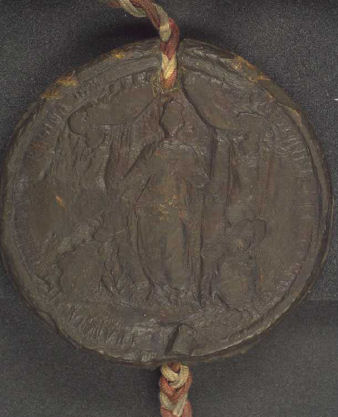 Counterseal of Catherine of of Braganza, wife of Charles ll, catalogue ref: DL 26/100/3248

I was interested in ADM 1/8634/182 (1922), an Admiralty file recommending the abolition of the ‘Left hand salute’. The Admiralty was following the lead of the Army, who had abolished this earlier. The two reasons given were: 1. ‘The imitation of continental army practice’ and 2. ‘Moslem or Oriental feeling that a left hand salute is an insult’. The second reason was of particular importance to the army due to their increased recruitment of soldiers of different religions within the British Empire. The Royal Navy thought that in order to keep abreast with modern times, they too should adopt this measure. 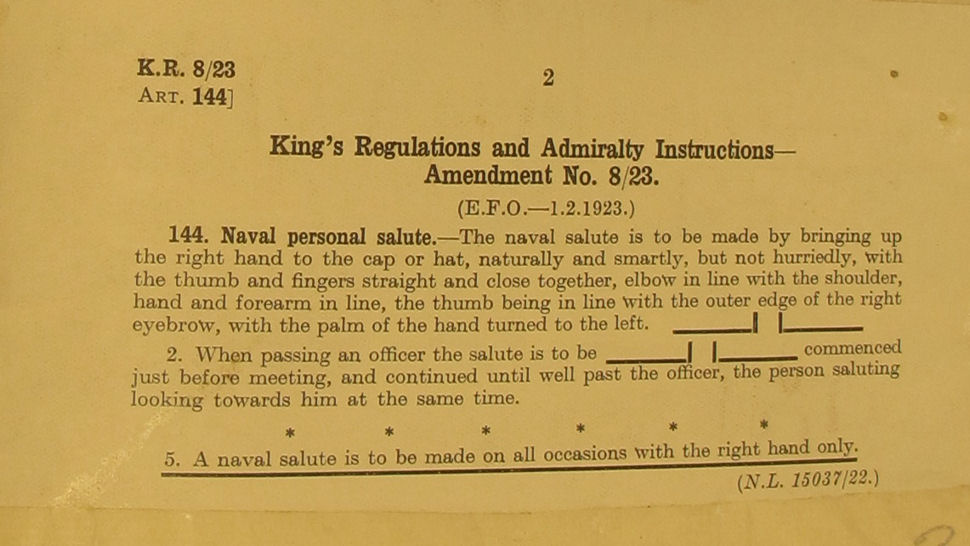 AIR 42/88 contains correspondence regarding the secret tactical plan for the air attack, by day and night, of Berlin.  Called ‘Plan Lefthand’, which I thought was an interesting code word – could that have been something to do with the right hand not knowing what the left hand is doing?

The ‘daily sick book’ for the female convict ship Atwick,  was written by the ship’s surgeon Peter Leonard (ADM 101/6/4/1 1837).  Folio two shows amongst others listed, Mary Ann Dowell, a convict aged 25, who broke her left leg, ‘fractura ossce fibula sinistere’. She was put on sick list on 12 October 1837 and discharged on 29 October 1837, presumably having recovered.

Lots of famous people are lefties. One is Cecil Beaton and we hold a number of his photographs taken while he was in India in 1944 (INF 14/434/5). Beaton certainly fits the perception of left handed people as being more creative.  He had been a war photographer during the Second World War, employed by the Ministry of Information and these photos were taken while working for them.

I found a photograph of Bob Mathias, the 26 year old American decathlon champion, in INF 10/373/7.  He won a gold medal during the 1948 London Olympic Games, when he was just 17. This photo shows Mathias on a goodwill visit to Uganda in 1966, giving coaching to some young athletes, demonstrating putting the shot. When he was confronted with a ‘left hander’ he immediately changed hands himself (he was normally right handed). His left handed throw was very close to the Ugandan record. 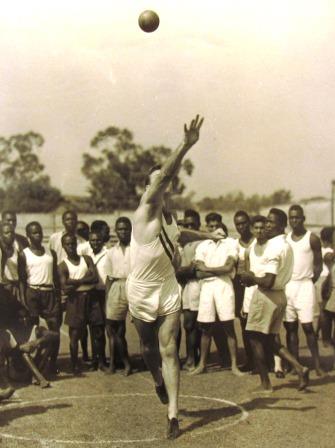 On a more sinister note, black magic is sometimes known as the ‘left hand path’ whereas the ‘right hand path’ refers to white magic and all that is good. We hold here at The National Archives, depositions (witness statements) of witchcraft trials.  These are found mostly in the record series ASSI 45,  for the Northern Assize Courts. These can be searched with the help of a paper index in the Open Reading Room, which enable the trials to be searched by subject matter, ‘witchcraft’ being one.

One of the last trials under the Witchcraft Act, 1735 to be held in this country was in 1944 and held at the Old Bailey. It was the trial of Helen Duncan (we don’t know if she was herself left-handed) and is covered in HO 144/22172, also CRIM 1/1581 and DPP 2/1204 and DPP 2/1234. The trial was based on the fact that Duncan and her partner allegedly knew about the sinking of a particular ship before any announcement had been made by the Admiralty. This, reportedly, enabled her to elicit money from members of the public who attended her seances and were hopeful of making contact with their loved ones who had died.  Duncan was convicted and sent to Holloway Prison, although the sentence was reduced after appeal.

I have always been particularly interested in the dangerous and damaging idea people have had for centuries of forcing children to change from using their left hand to make them use their right. This seems to have carried on in schools and families right up to the 1960s. My mother was made to do exactly this when she first started school and all her life suffered from a really bad stammer. Doctors later told her that this was a direct result of her being forced to change her writing hand from left to right.  My mother suffered the same disability as King George Vl who was also left handed and was also forced to change to being right handed, when he was a boy. In Ed 50/159 (1924 – 1935) the effects of left and right handedness on speech is discussed briefly, and within Ed 11/269  left handedness is covered.

Lastly, we hold the descriptions of two records of the Royal Mail, dates unknown. These are: Post 30/3041, ‘Telegraphists: Suitability of left handed persons’ and POST 33/1956 ‘Telephonists: Suitability of left handed persons. Rules amended’.  Unfortunately neither of these records are available to view at The National Archives, much to my disappointment. Both of them are now at the BT archives. However, the descriptions themselves amused me, certainly not something they would get away with today – but seemingly not then either!

So, leftie, gibble fisted, dolly pawed – I don’t mind what I’m called.  I personally have never felt disadvantaged in any way,  I just feel rather special.