Home > Blog > ‘Lampson Unlocked’: the films of the revolution!

‘Lampson Unlocked’: the films of the revolution!

All you budding thespians and artists, please take a look at the films below and ask yourself: how could the kernels of such exciting creativity lie in the heart of a Foreign Office file, tucked away in an archive? Easy! An archive can be many things to many people and these films show how our rich historical collections can be used to inspire story-telling through performance and art.

This project, Lampson Unlocked: Fear God! Fear Nought! is a partnership project between The National Archives, the V&A’s Learning department and the Wren Academy, North Finchley. It has at its heart an original report written by Oliver Locker-Lampson, a British Armored Car squadron commander stationed in Petrograd during the Russian Revolution in 1917 (FO 371/2996). For an official report, this document is rather unusual in style. Its narrative is hurried and emotive, the reader feels the full sense of history unfolding outside the hotel where the squadron is stationed.The threat of insurrection is in the air; the fervour of starving, desperate people pushing for reform; you can almost hear the pistol shots bouncing off the walls.

‘Many were killed in the hall, and thoroughly roused, the revolutionaries mounted the stairs, the soldiers asking for revenge, the mob scenting loot in the carpeted corridors and luxurious flats of the hotel.’

During the course of that evening, the squadron rescue two women in fear of their lives, one of whom, Princess Eugenia Tumanishvili, has been shot in the neck…

Locker-Lampson had a gift for engaging people through language. Almost a century on, his words drew in these talented drama and art students who responded by creating an amazingly powerful performance, as well as beautiful and unique ‘cabinets of curiosity’, interpretations of the revolution, life and personality of Locker Lampson himself. The V&A played a pivotal role in this project, their collections supplementing a temporary exhibition on Russian avant-garde theatre and their workshops helping the students to develop a wider understanding of the art and theatrical movements of the time. Add to this the vision, skills and dedication of both the Wren Academy teachers and Adrian, Programmes Manager at the V&A in supporting this project and it’s hard to imagine how it could have been better.

The students’ performance. Used with permission from the V&A.

Thanks to the sponsorship of The Friends of The National Archives, we have a means to share and recall some of the energy of this project  via the films that they funded, skilfully devised by Chocolate Films. These films show the process of building and delivering the project, some of the artwork created by the young people and elements of their dramatic performance. A film of the performance as well as the students’ artwork will be displayed at The National Archives from next month. 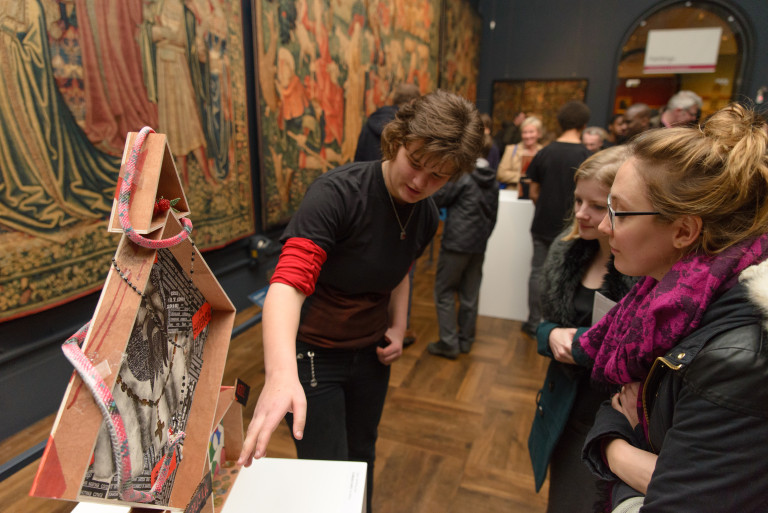 A cabinet of curiosity in the V&A tapestry gallery. Used with permission from the V&A.

There was a lovely moment in this project that made this project particularly memorable. We had managed to track down Jonathan, the younger son of Commander Oliver Locker-Lampson and, unbeknown to the students who already had enough to think about, invited him and his daughter to attend the event at the V&A. The students had already chosen the project title to be based upon the Locker-Lampson family motto, and the reaction to his presence in the theatre space, when finally announced, was incredible! It was moving to see how greatly they valued meeting a direct descendant of the enigmatic Locker-Lampson of their research. Adrian expressed it well:’They are one generational hand-shake away from the man whose story they have been bringing to life’. 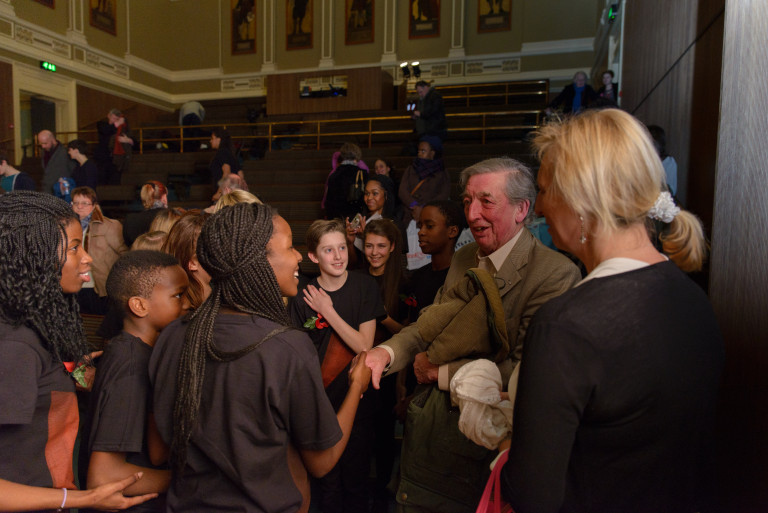 The students meet Jonathan Locker-Lampson. Used with permission from the V&A.

For me, Adrian’s comment sums it up. It is when we are moved personally by history, when we can ‘touch’ it or feel its power in our lives, that we start to understand the immeasurable potential of our collections and the exciting journeys they can inspire.