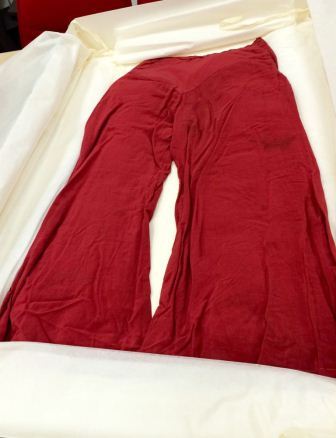 I had always heard an archive myth of the red silk pyjamas held in our collections, so I felt for this year’s LGBT History Month it might be time to order them up and take a look for myself. The outfit was collected as evidence in a court case regarding the ‘corruption of the morals of His Majesty’s liege subjects’ – essentially, the individuals were accused of running a brothel. The red pyjamas, or as it was noted on the list of exhibits, the ‘red costume’, was seemingly a lounge suit worn by one of the parties (CRIM 1/638). Slowly unpicking a story surrounding an item is an exciting process. The police reports are from many different perspectives allowing the scene to be pieced together.

On 20 December 1932 two undercover police offers were invited to a premises in Holland Park, and upon arriving they were each greeted with a kiss on the hand from a man in exaggerated makeup and an evening dress known as Lady Austin. Welcoming them in, Austin remarked: ‘Don’t go and get too fruity yet’.

Once inside the ballroom 50-60 people were found to be present. ‘One half of them were attired in evening dress, the other half being dressed in lounge suits. All were male.’ The set up was explained to the undercover officers; the men in dresses were termed ‘queenies’ and the men in lounge suits termed ‘kings’. The officers each adopted a role and, in keeping with their disguise, pretended to be a couple.

The police reports note that every so often the lights went out and squeals of delight could be heard. 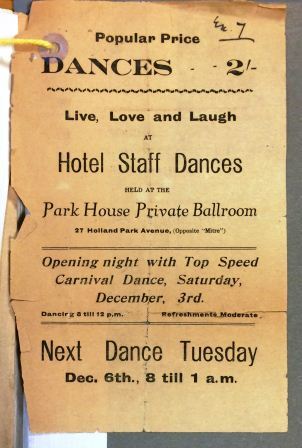 A flyer included as evidence sums up the event with the compelling phrase ‘Live, love and laugh’. As the handbill notes the event was aimed at ‘hotel staff’, many of whom contributed oral testimonies to the case (CRIM 1/638).

At the time this type of event was considered a criminal activity, especially as there was a charge for entry, which led to comparisons with a brothel. The undercover police investigations led to a police raid on the Holland Park dance in the early hours of the morning.

As the premises were raided Lady Austin defended the dance, and when the police read out the warrant by Austin said, ‘Surely only members of our cult are here. What harm are we doing? You don’t understand our love.’

Ernest Smith, Chief Inspector, said: ‘What do you mean by members of our cult?’ He said, ‘Why Lady Austin’s camp boys of course. We all know each other and they are introduced here from Betty’s in Baker Street’ (CRIM 1/638).

This particular case is one of several in our collections that show what the gay scene of the 1930s was like. Despite their actions being deemed illegal at this time, individuals in the LGBTQ community attempted to create ways they could meet and socialise with people that were accepting. Our collection contains many flyers and tickets from similar events, which can now be found predominantly in files relating to police and court cases.

What is harder to judge is how many similar events went on undiscovered by the authorities. Such files demonstrate it was possible for LGBTQ individuals to have a vibrant social life, as long as it was away from the police gaze. This event occurred after only six such events at this location. Matt Houlbrook’s Queer London provides an excellent resource on the queer social scene in London at this time.

One of the court’s accusations was that the property was being run as a male brothel. When questioned by the police, the proprietor notes that he pays the staff, such as Mrs. O’Farrell 15/- a night for the floor and a 35/- charge for the band. He explains that the members are charged a minimal 1/6 to attend ‘so we don’t run it for profit, only for love, but of course you don’t understand that’. 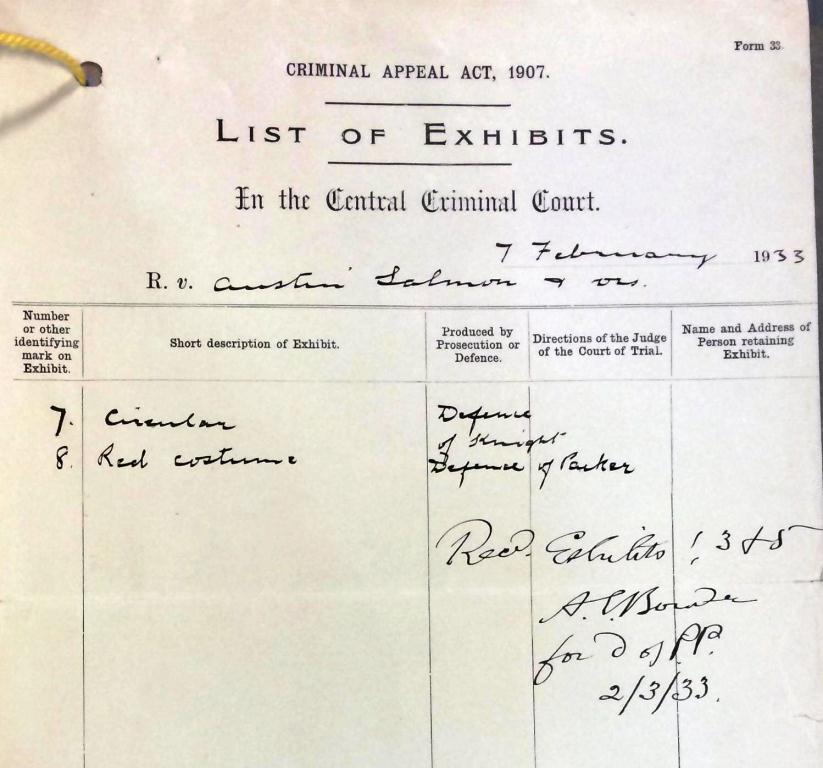 Ultimately this police visit to the premises in Holland Park led to a prosecution on the basis of ‘diverse lewd, scandalous, bawdy and obscene performances and practices’ – essentially men openly having sexual relations with other men. Based on the police evidence Austin and others were charged. The file shows a list of over 20 names with ‘guilty’ written next to each (CRIM 1/638).

In the police statements Austin remarks: ‘Oh, dear, this trouble would be obviated if they made our love legal’. Indeed it would be over 30 years later that the Sexual Offences Act was passed, decriminalising homosexuality in England and Wales for the first time, albeit on unequal terms.

LGBTQ history can be incredibly rich and revealing – this month I urge you to wander into a local archive and see what you can discover.

This month we have two exciting events relating to LGBTQ history, a talk by Neil McKenna on Fanny & Stella: the young men who shocked Victorian England and Out of the archives, an LGBTQ zine workshop based on records held here.