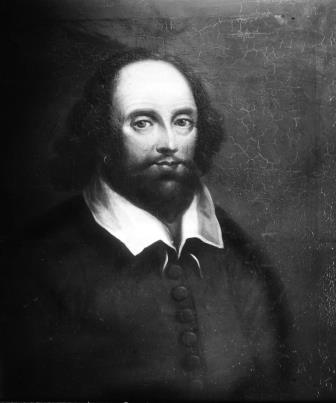 Portrait of William Shakespeare from a painting by Adam Elsheimer (catalogue reference: copy 1/538/92 )

In Shakespeare’s day women could not act in public and female roles were performed by boys and young men.

However, what is less well known is there were children’s companies entirely comprised of young boys who played both male and female roles. The Children of the Chapel was one of the most famous, and this blog will explore some of the more extreme methods they went to in order to recruit boys actors.

Children’s companies grew out of the medieval tradition of boy choristers acting in religious plays for the court. This tradition gave the Choirmaster (by royal authority) the power to impress children into service in courtly choirs at Windsor, St. Pauls and the Chapel Royal. Impressment was similar to the practice of press-ganging adult males into military service. By the late 16th century St. Pauls and the Chapel Royal both had children’s acting and singing companies.

My interest in the children’s companies centres on the period from 1600-1608 when the Children of the Chapel leased a purpose-built indoor theatre space in Blackfriars from Cuthbert and Richard Burbage. The Burbages had intended to use the Blackfriars Theatre for public performances but had been prevented when unhappy residents had petitioned the Privy Council to stop them.

The new Blackfriars Theatre needed as many children as possible – and quickly – to create a new acting troupe. Nathaniel Giles had become Choirmaster of the Chapel Children in 1597 and with this position came the power to impress children into service. Giles’s ‘Charter’ gave him the authority to impress 12 boys although many Blackfriars plays had up to 20 people on stage at once. 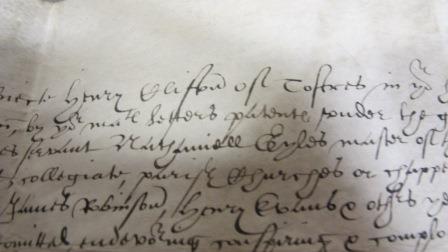 The complaint of Henry Clifton about his son who was kidnapped (catalogue reference: STAC 5/C46/39)

On 13 December 1600 he made the mistake of sending James Robinson (and possibly someone else) to kidnap Thomas Clifton, a 13 year old boy on his way to Christ Church  grammar school. The boy was hauled back to the theatre and with threats of whipping, given a scroll of paper with lines to learn ‘by harte’. His father set about unsuccessfully getting his child back and enlisted the help of a powerful friend – Sir John Fortescue, the Chancellor of the Exchequer and Privy Council member – and only then was his child returned to him.

I found much information on this event in the book ‘Children of the Chapel at Blackfriars 1597-1603‘ by Charles William Wallace, who did the first in-depth study of this Children’s Company and the Thomas Clifton abduction, along with ‘The Child Actors: A chapter in Elizabethan stage history‘ by Harold Newcomb Hillebrand and ‘Children of the Queen’s Revels: A Jacobean Theatre Repertory‘ by Lucy Munro.

In December 1601 Henry Clifton, a gentleman from Norfolk (and the father of the abducted Thomas) put forward a Bill of Complaint against ‘Giles, Evans, Robinson and others’. This complaint which can be found in the National Archives document STAC 5/C46/39 (and was dealt with in the Star Chamber in the spring of 1602) contains much detail on the individual kidnap. Clifton states that seven other boys were also ‘unjustly taken’ around the same time. Their names were: John Chappell, John Motteram and Nathan Field, who were all grammar school boys; Alvery Trussell, an apprentice to Thomas Gyles; Philip Pykman and Thomas Grymes, apprentices to Richard and George Chambers; and finally Saloman Pavey, apprentice to Edward Pearce the choirmaster at St. Pauls.

Henry Clifton was angered at the treatment of his son and only heir and that he was being made to learn a ‘base trade’. The result of the court action was that only Henry Evans was censured for:

‘taking up of gentlemen’s children against their wills and to ymploy them for players.’

He was forced to resign from his post but Nathaniel Giles was not reprimanded at all and kept his position and the Chapel Children continued to perform plays.

Of the seven other children mentioned two we know remained with the Blackfriars acting troupe. Saloman Pavey and Nathan Field both acted in the plays ‘Cynthia’s Revels’ and ‘The Poetaster’. Sadly Saloman Pavey died at just 13, but Nathan Field became a leading actor of his day and died in 1620. After this controversial episode became public children’s companies began apprenticing young actors, as the adult companies had always done, instead of impressment.

In Shakespeare’s Hamlet in the folio text, mention is made of the children’s companies. They are called ‘little eyases’, meaning untrained hawks, and Rosencrantz is worried they take a richer clientele away from the public theatres:

Only a gentleman would carry a rapier. He is also against the practice of putting controversial views into the mouths of children:

‘the nation holds it no sin to tarre them
To controversy.’ Hamlet, Act II, Scene ii, page 15 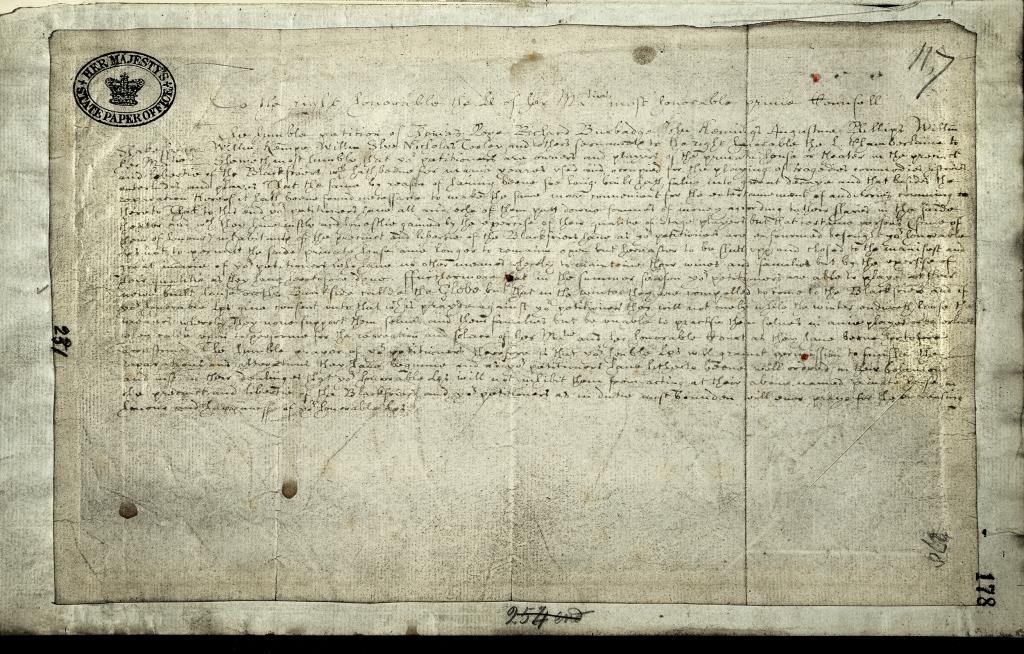 Petition by the players of Blackfriars theatre to keep the theatre open, 1596 (catalogue reference: SP 12/260/117)

In 1608 more controversial plays such as ‘The Conspiracy and Tragedy of Charles Duke of Byron’ and ‘the Silver Mine’ caused the Company to collapse. Richard Burbage regained full control of the Blackfriars lease in 1608, evicting the Children of the Revels from the premises. From 1609 Shakespeare’s company ‘the King’s men’ were performing at this theatre.

The Children of the Revels continued to act and sing at the Whitefriars theatre in 1609, they were now the last Children’s acting Company. They lasted until 1613 when they were merged with the ‘Lady Elizabeth’s Men’ and soon after disappeared from history. This was a dark and disturbing episode of kidnap and forced child labour, all for the monetary gain of adults.