Our Keeper’s Gallery currently features a display highlighting the 800th anniversary of the granting of Magna Carta (also known as the Charter of Liberties or Great Charter), a document which laid down many crucial principles of good government and, for the first time, committed the king to acting within the rule of law. It was issued by King John in response to a rebellion by his barons, many of whom were unhappy with the way that he treated them, and is seen as the foundation of many of the liberties and freedoms that we now enjoy. The National Archives holds a wealth of documents which tell the story of Magna Carta and put it in context. The display in the Keeper’s Gallery, part of a programme of commemorative activities, runs until 27 November 2015,  and up until 12 June includes our definitive 1225 Magna Carta re-issue.

Magna Carta was issued in June 1215 as an attempt to prevent civil war between King John and his barons. It failed to do so, and within a few months many barons were in open rebellion. But Magna Carta was already becoming important as a symbol, and when John’s nine year old son Henry succeeded his father in 1216 this minority government reissued the Charter to demonstrate its commitment to good government.

In 1225 Henry III was beginning to rule in his own right; to establish his personal commitment to good government and the rule of law he once again reissued Magna Carta. The text was slightly revised to suit the circumstances of the time, and this became the definitive text and the version that was eventually put onto the statute book. 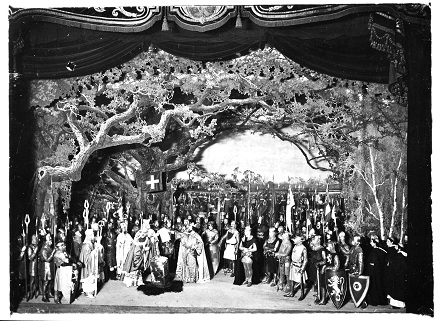 Photograph of ‘tableau’ of the sealing of Magna Carta from a Victorian theatre production (catalogue reference: COPY 1/442/651)

Pope Innocent III issued a bull to the barons of England in April 1215, ordering them to pay King John the money that they owed him for his military campaign in Poitou the year before. Many of the barons had refused to contribute toward the cost of the campaign, one of the first signs of organised resistance to John.

The rebellious barons took control of the key stronghold of London in May 1215. A few days after Magna Carta had been issued, King John and the rebel leaders agreed that the city and tower will be handed back to the king if he upheld the terms of the Great Charter.

King John and the rebel leaders agree that the city and tower will be handed back to the king if he upholds the terms of the Great Charter (catalogue reference: C 47/34/1/1) 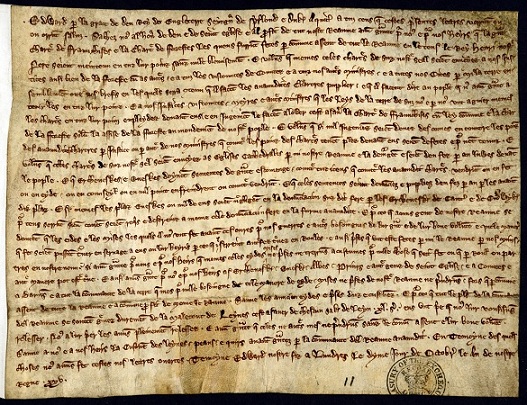 In 1297 Edward I wanted to impose a new tax on his barons. They were unhappy about this and rebellion loomed. To win their support, the king reissued Magna Carta and the Charter of the Forest. The latter was a charter first issued in 1217 which complemented Magna Carta by redressing some of the grievances against the Forest Law and established rights of access to royal forest. This document is dated 1297 and is written in Norman French. It records the reissue of the charters and also confirms that taxation should be by the ‘common assent of the realm’. It orders that copies of the charters should be sent to cathedral churches throughout England and read before the people twice a year (E 175/1/11).

All documents featured here will be on display in our Keeper’s Gallery until November 2015 (with the exception of the 1225 Magna Carta, which will remain here until 12 June only).

Free Magna Carta talks by medieval record specialists will take place in the gallery at the following times:

Please meet at the entrance to the Keeper’s Gallery five minutes before the tour start time. Places will be allocated on a first come, first served basis.