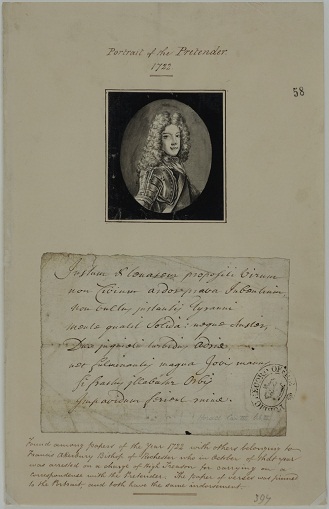 Our Keeper’s Gallery currently features a display highlighting the Jacobite Rebellions of 1715 and 1745. The Jacobites supported the restoration of the Stuart line to the thrones of England, Scotland and Ireland following the deposition of James Stuart (James II) in 1688. Jacobitism was a persistent and very real threat to the government for the best part of a century, peaking with the risings of 1715 and 1745. In Scotland the movement was fuelled by the unpopularity of the parliamentary Union with England in 1707, and this resentment increased with the succession of the House of Hanover and George I in 1714. In England there was strong opposition to the Whig domination of George I’s government and some sympathy for the Jacobites, particularly in the north-east. The name is taken from Jacobus, the Latin for James.

The pen and ink portrait dated c1722 is of James Francis Edward Stuart (‘Old Pretender’) who was the son and heir of James II. Underneath the portrait is a quotation from the Odes of Horace. The portrait and the poem were in the possession of Francis Atterbury, Bishop of Rochester, when he was arrested for conspiring with the Jacobites in 1722. 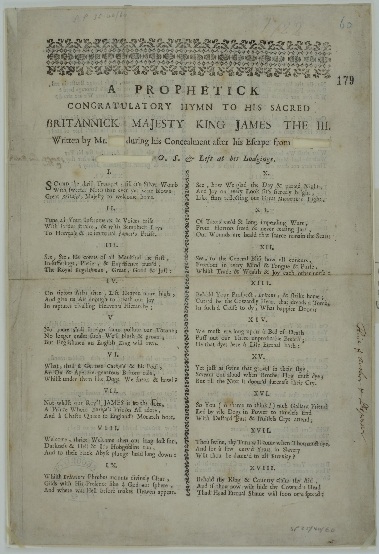 This ‘Congratulatory hymn to his sacred Brittanick Majesty King James III’ is dated c1722. This poem was one of several vehemently Jacobite poems published in George I’s reign, and memorably demanded that ‘no more shall foreign scum pollute our Throne’. The name of the author has been excised. 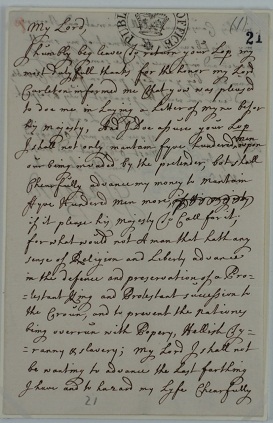 As the threat of Jacobite invasion increased in the summer of 1715 those in support of the Hanoverians sought to assert their loyalty. In this letter the Earl of Glasgow pledged to fund 500 men and advance money for 500 more, in order to ‘prevent the nations being overrun with popery, hellish tyranny and slavery’. 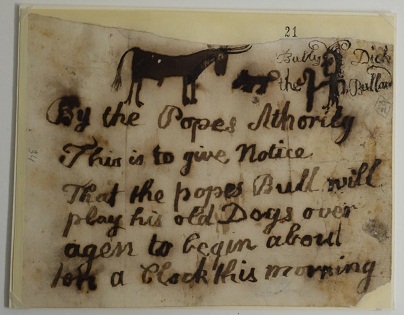 The 1745 rising saw the Jacobites march as far south as Derby, and it was widely believed they would attempt to take London. Fear of the invasion stretched southwards, and this poster was found pinned to a church door in Keevil, Wiltshire, by vicar Richard Wainhouse, who sent it to the duke of Newcastle. Wainhouse suspects two men in the village of drawing it, and describes them as ‘turbulent and cruel men and as savage as the rebellious highlanders’. Even as far south as Wiltshire the threat of invasion brought local conflicts to the surface. 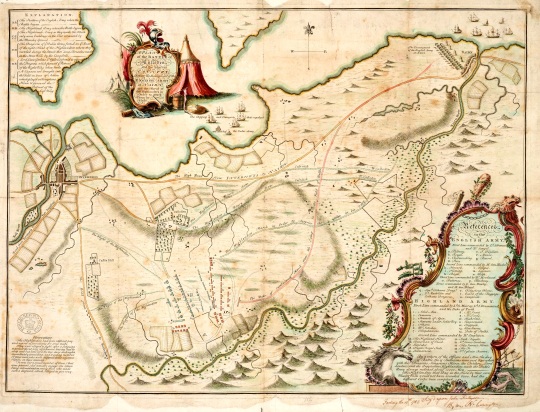 On 16 April 1746 the Jacobite and Hanoverian armies fought the definitive battle of the rising at Culloden, represented in this map dated 1753. The Hanoverian army led by the Duke of Cumberland, son of King George II, defeated the much smaller army of Lord John Murray and Prince Charles Edward Stuart (‘Young Pretender’ or ‘Bonnie Prince Charlie’). Charles Edward Stuart chose not to regroup his forces and fled abroad. Cumberland was determined to finally dismiss the Jacobite threat. Anyone suspected of Jacobite sympathies was punished and laws were enacted to crush the power of the clans. 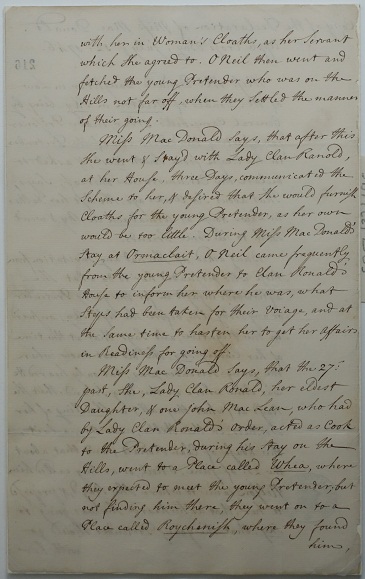 This document dated July 1746 describes how Flora MacDonald aided the escape of Charles Edward Stuart after the battle of Culloden. The Prince was disguised as her maid, Betty Burke, and the party travelled from Benbucula in the Outer Hebrides to the Isle of Skye on the night of 28 June 1746. Although the Prince escaped, Flora was arrested and imprisoned in London where she was questioned. She was released in July 1746 and led an eventful life – emigrating to North Carolina before returning to Skye after the American War of Independence. 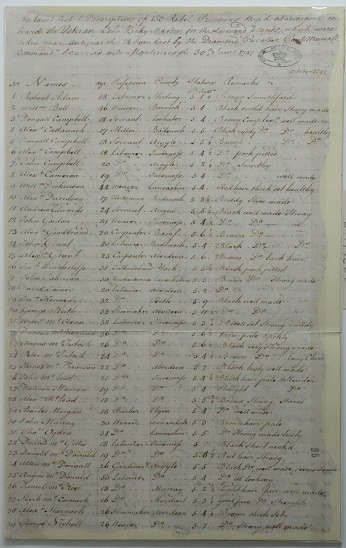 In the aftermath of the 1745 rising some of the Jacobite prionsers were transported to the colonies where they were sold into slavery. One ship, The Veteran, was captured en route to the Leeward Islands by a French ship, and taken to Martinique where the prisoners were set free. This list was provided by the merchant transporting the prisoners in his attempt to capture them. It includes the names of women and children.

To launch our season of Jacobite events Professor Daniel Szechi will be giving a talk on ‘1715: The Great Jacobite Rebellion’ on Friday 4 September – book tickets. You can learn more about the Jacobite risings and to see images of other documents with our classroom resources on the 1715 rebellion and the 1745 rebellion.

The Jacobite Rebellions display will be in the Keeper’s Gallery until January 2016.