Our Keeper’s Gallery currently features a display of the registered design series held here at The National Archives.

The National Archives holds the records of almost 3 million designs dating from 1839 to 1991. These are designs that were registered for copyright under a series of Acts of Parliament from 1839 onwards. As part of the registration process the person or company applying for copyright had to submit a ‘representation’ of the design – a sample, drawing, or photograph. This process resulted in an amazing collection of designs, which includes the decorative arts – ceramics, wallpaper, textiles, glass, metalwork, and wood – as well as ‘useful’ designs, or inventions.

The registered design display in the gallery

The display comprises a selection of the ceramic design representations held by The National Archives exhibited alongside examples of the final ceramic products produced according to the design.

The ceramic objects are on loan from a private individual, which is something we don’t normally do in the gallery. Bringing the documents and objects together has provided an unusual opportunity to see how the paper designs were ultimately transformed into the final manufactured object that people would have had in their homes. It is quite easy to look at the 2D design representations held here and forget they would have become 3D objects. The other illuminating aspect of having the documents alongside the objects is that it can be interesting to see what decorative areas of the design were actually registered. Sometimes for example the pattern wasn’t registered, only the basic form. 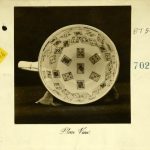 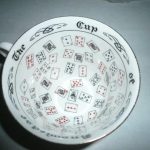 The end object: ‘The cup of knowledge’, made of bone china, Aynsley China. Loaned from a private individual.

This bone china cup along with a saucer was sold with an instruction booklet entitled: A key to the mysteries of divination, which contains instructions on ‘forecasting by tea leaves’. Fortune telling cups and saucers were all the rage in the 1920s, and were made by several different manufacturers. In this example, it was the playing card design on the inside of the cup that was being registered for copyright protection. The cup was made by Aynsley China, Stoke-on-Trent, which was established by John Aynsley in 1775. The company has produced items for the royal household, including the ‘Windsor’ design used at the wedding of the then Princess Elizabeth in 1947. 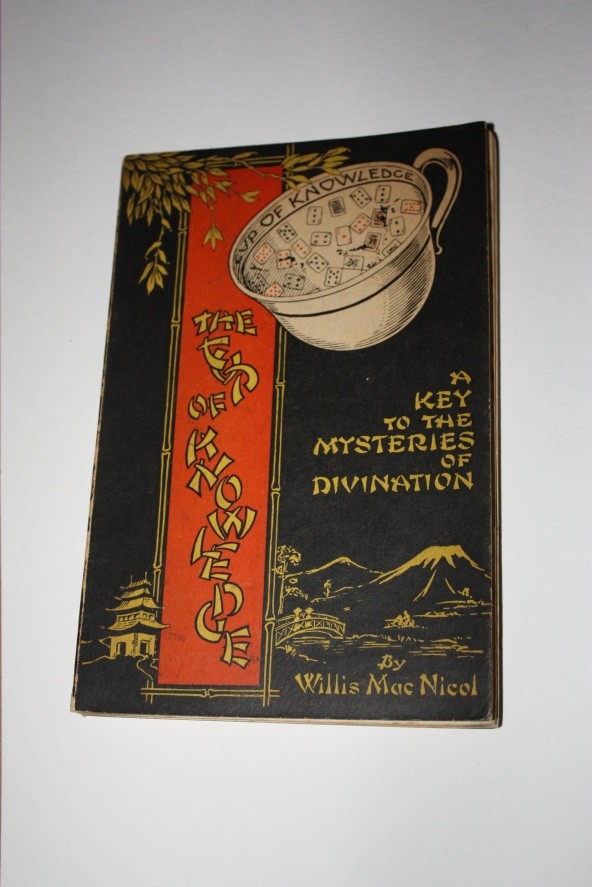 ‘A key to the mysteries of divination’ booklet that was sold with the cup and saucer. 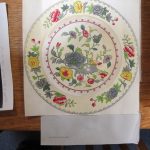 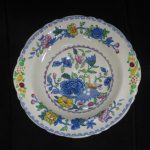 Mason’s in Stoke-on-Trent was established in the early nineteenth century and became famous for its ‘oriental’ designs based directly on Chinese and Japanese models. The ‘Regency’ pattern was also sold under the name ‘Plantation Colonial’ for the US and Canadian markets. Ironstone was developed by potters in Staffordshire as a cheaper, mass-produced and more durable alternative to porcelain. Charles James Mason patented Ironstone in 1813, making the company a fortune. 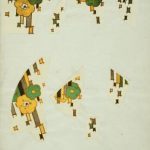 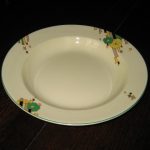 This bowl was produced by Morley in Stoke-on-Trent. The art deco pattern is typical of the style, which dominated all aspects of the decorative arts from around 1925 to the beginning of the Second World War in 1939. It is characterised by the use of angular, geometric shapes reflecting the influence of contemporary artistic movements like cubism and futurism, and bright, vibrant colours. The forms are elegant, functional and modern. In this case, the pattern was registered rather than the bowl design. The ‘Mayfair’ pattern was used on various other ceramic items as part of tableware and tea sets. 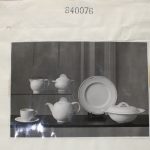 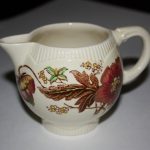 Under wartime regulations only plain white pottery could be produced, so the shape of this jug was registered but the pattern must have been added after the end of the war. The jug has the ‘Clarice Cliff’ mark on the base. She worked for the Newport Pottery, Stoke-on-Trent, from around 1925 onwards, becoming famous for her art deco shapes and patterns. After the war most of the pottery’s wares were sold to the USA, where the taste was for more traditional English designs. Although Clarice Cliff had less creative input, the ‘Clarice Cliff’ mark continued to be added to standard ranges made by the factory.

The registered design display will be in the Keeper’s Gallery until January 2015.