It’s not the document, it’s the information

Researchers spend a lot of time looking for documents. In fact, they may spend more time on this than on reading what they have found. It took me more than 20 years to find my great-grandfather’s birth certificate, but only a few minutes to read it once I had tracked it down. Not that I spent every waking minute of those 20 years in hot pursuit, but I did devote many hours to the problem during that time. It took quite a bit of creative thinking and the use of some less than obvious record sources to get there, but I made it in the end, and felt very pleased with myself as a result. The fact that the answer to one question presented me with another bigger, and so far unresolved, problem is neither here nor there.

Many kinds of research lend themselves to the use of standard sources which provide the essential information in most cases. Genealogists in particular use various birth, marriage and death records, census returns and probate records to work their way back through the generations. This works fairly well much of the time, but when you can’t find the marriage or the census entry you want then you become stuck. But when the direct approach doesn’t work there may be another way. Think about it; when you say that you need to find a death certificate, or a census entry, what you really mean is that you need the information that you would expect to find in that document, rather than the piece of paper itself. So if your search is unsuccessful, think about the specific information you want, and then consider whether you might be able to find it from another source. Sometimes you will find that there is more information in the alternative source than you would have found in your first choice. 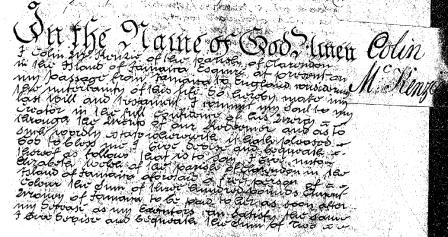 PCC Will of Colin McKenzie 1808, en route from Jamaica to England

It can be particularly difficult to obtain details of a person’s death, and English death certificates are not very informative, so even a successful search may not produce a very satisfactory result. However, if the person left a will you might learn more about them and their family from that instead. In many cases where there was no official record of the death, for example if the person died overseas or at sea, this might be the only record to be found.

If the will was proved between 1796 and 1903 you might find even more detail in a death duty register entry. These registers were kept by the Inland Revenue to record the tax paid on the estates of the deceased, and where a bequest took the form of an annual income rather than a one-off payment, the tax was payable annually too. This means that a register entry might be updated for many years after the will was proved. So if a man left someone an income for life, the death duty register would record the date of their death, after which no further income was paid and no more tax was payable. There is a research guide on Death Duty Registers that explains this in more detail

Deaths in the armed forces can be hard to trace, although you may be able to trace a man’s whole career through muster rolls, where they exist. You can sometimes find details of a man’s birth by this method too. Working through volumes of musters can be tedious, but it isn’t difficult. This is how I found the exact date and place of birth of an ancestor who was born in Co Tyrone in 1785, before the start of the parish registers there, so even if I had somehow discovered his place of birth, I would have only been able to guess at the date.

Receipt for proceeds the sale of effects

For a few short periods there are registers of payments to the next of kin of soldiers who died in service, and some registers of the sale of their possessions, the proceeds going to the next of kin. These are fascinating snapshots of social history, as well as evidence of deaths. These and many other records are described in the research guide on British Army soldiers up to 1913: further research.

Not all elusive documents are to do with births and deaths, but I hope these serve as good examples of how thinking laterally instead of (or as well as) tackling a research problem head on might produce unexpectedly good results. It’s always worth looking at the bigger picture.