Isaac Chetham: From ‘Scum of the Earth’ to Commissioned Officer in Wellington’s Army

The social order of late 18th and early 19th century Britain ordained that there was a strict distinction between the Officer class of the British Army and the rank and file, who Wellington famously described as ‘the scum of the earth’. In order to be an officer one was expected to be a gentleman born and bred. To some extent this changed during the Peninsular War when five to six per cent of the officers serving in the Army were promoted from the ranks. One such man was Isaac Chetham.

Isaac Chetham was born in Nottingham during the first half of 1781, the son of Edward and Mary Chetham (baptismal certificate in WO 42/8/C306). I have been unable to discover Edward Chetham’s occupation, but as his son could read and write, and had obviously had at least a basic education, I feel that he is more likely to have been a tradesman, or skilled craftsman, than a labourer. Whatever his occupation it would appear that Edward Chetham was not in a position to purchase a commission for his son when he joined the Army in 1797, at the age of 16. None the less Isaac rose steadily through the ranks and was commissioned as an Ensign in 1811.

Isaac was one of those who responded to a circular return sent out by the War Office in October 1828 to retired officers on full, or half, pay. This return is held at The National Archives (WO 25/753/49) and it gives considerable insight into the Army career of a man who fought in many of the major battles of the Peninsular War. 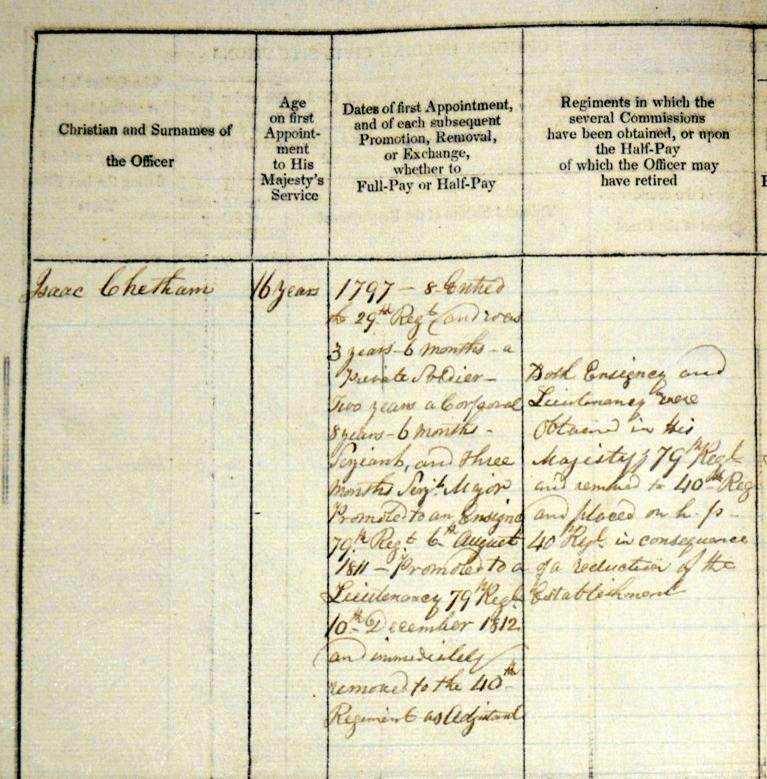 WO 25/753/49: Record of service: Extract from Isaac Chetham’s return recording his service in the ranks and as an Officer.

Isaac first enlisted in the 29th Foot and rose steadily through the ranks serving for three and a half years as a Private, two years as a Corporal, eight and a half years as a Sergeant, and three months as a Sergeant Major. His first taste of action came in 1799 when he was part of the Duke of York’s expedition to the Netherlands. He fought in the initial engagement at Callantsoog on 27 August and in the battles of 19 September, and 2 and 6 October. By 1802 Isaac was a Sergeant, still with the 29th Foot, and was stationed in Halifax Nova Scotia where on 7 December 1802 he married Mary Morel (marriage certificate: WO 42/8/C306). As Isaac records on his service return (WO 25/753/49), he and Mary went on to have three children: Mary Ann born on 15 September 1803; Edward born on 27 May 1805; and Elizabeth born on 11 August 1816.

In September 1807 the 29th Foot returned to England and in December the same year the Regiment left for the Peninsular. With the 29th Foot Isaac fought in five major battles: Rolica (17 August 1808), Vimerio (21 August 1808), Talavera (27-28 July 1809), Busaco (27 September 1810) and Albuhera (16 May 1811). At Talavera on 27 July 1809 a composite battalion of the 29th and 48th Regiments of Foot attacked three French Regiments on a hill known as the Cerro de Medelin. The 29th Regiment drove the French from the hill with a single volley and bayonet charge. The following morning the hill was hit by massed artillery fire followed by an assault by six French battalions advancing in column. The British defended the hill in line formation, overwhelming the French attack. The 29th Regiment of Foot captured two French colours in the bayonet charge and then drove the French from the field. On 12 September 1809 Wellington wrote:

‘I wish very much that some measures could be adopted to get recruits for the 29th Regiment, it is the best Regiment in this Army, has an admirable internal system and excellent Non-Commissioned Officers’

As a Sergeant of over six years standing Isaac Chetham was one of those ‘excellent Non-Commissioned Officers’. (1) 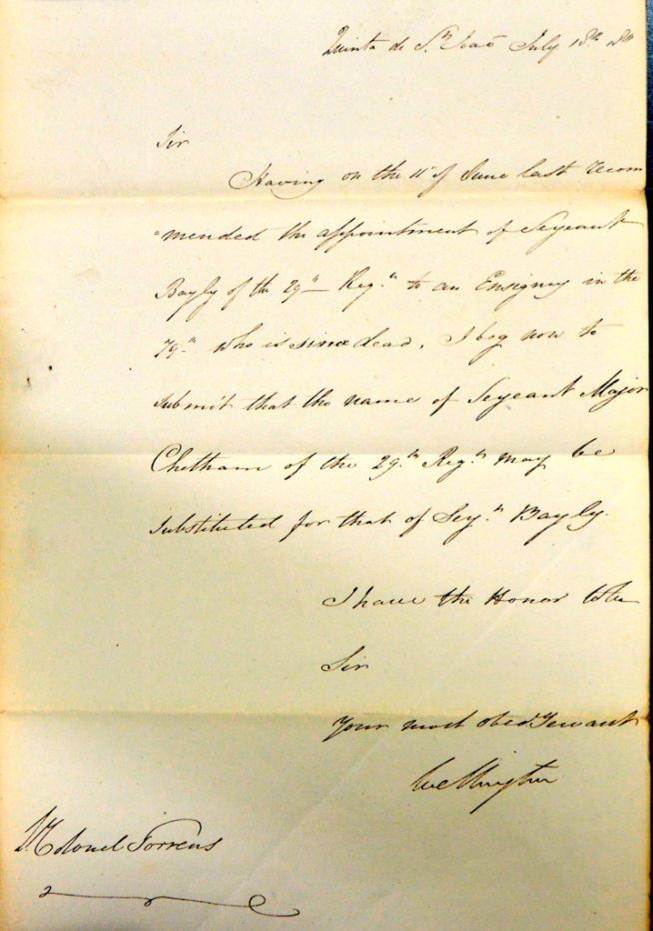 WO 31/328: Letter from Wellington granting the 1st commission to Isaac Chetham as Ensign in 79th Foot.

On 6 August 1811 Isaac, on Wellington’s personal recommendation, was commissioned as an Ensign in the 79th Foot (letter from Wellington: WO 31/328). With the 79th Foot he was present at the battle of Salamanca on 22 July 1812. On 10 September 1812 Isaac received a Lieutenant’s commission and was immediately removed to the 40th regiment of Foot. He saw action at the battles of Vitoria (21 June 1813), Orthez (27 February 1814) and Toulouse (10 April 1814). Very much against his own wishes on 24 February 1817 Isaac was placed on half pay with the reduction of the number of additional Lieutenants in the 40th Foot. He points out that despite having been severely wounded three times he has no pension. At the time he completed his return of service Isaac was living in Nottingham on half pay and had no military or civil employment. He died aged 73, from natural causes at his home in Nottingham on 19th October 1854 (death certificate: WO 42/8/C306).

When I first found out about Isaac Chetham I was intrigued by the story of a man who like Bernard Cornwell’s fictional hero Richard Sharpe was one of the relatively few men who rose from the ranks of Wellington’s Army to become a commissioned officer. I wanted to find out more about his Army career, and if possible about the man himself. From his return of service I have managed to piece together details of his Army career, both in the ranks, and as a commissioned officer. I have also learned a little of his personal history, and his life once the fighting was over. Two hundred years after the war in which he fought came to an end, I am pleased to feel that by piecing together information from some of the collections held here at Kew the lives and service of men like Isaac Chetham can still be remembered.

(1)     The details of the battle of Talavera and the quotation from Wellington are taken from (http://en.wikipedia.org/wiki/29th_(Worcestershire)_Regiment_of_Foot)