Set cookie preferences
Home > Blog > The Irish on the Somme

The Irish on the Somme

Many words have been written about the Battle of the Somme, which began 100 years ago in July. But an interesting and lesser-studied aspect of the early part of the Somme Offensive was the contribution made by Irish soldiers – particularly, two Irish Divisions: the 36th (Ulster) Division and the 16th Irish Division.  The former was heavily involved in the traumatic first day of battle, the latter in capturing two German-held villages in September 1916. My own research – which will culminate in a panel display at The National Archives in July  – explores the participation and commemoration of the two divisions and their crucial part in the conflict.  It also looks at how the memorialisation and perception of sacrifice has differed between the unionist and nationalist communities of Ireland.

My research draws together a range of sources from The National Archives, the Public Records Office Northern Ireland the Ulster Museum, as well as the National Library of Ireland, in order to tell a more complete narrative of the events from the first day of this most significant of battles:

On the morning of 1 July 1916, the soldiers of 14th Battalion Royal Irish Rifles, part of the 36th Ulster Division, climbed out of their trenches into ‘no mans land’ to attack the enemy and capture a fortified installation – the Schwaben Redoubt; a network of machine-gun emplacements near Thiepval. George Hackney was a member of this battalion and was able to take a photograph early on the first day of the capture of numerous German prisoners. The incident is also recorded through official war diary entries, with reference to ‘prisoners passing down the trench’ (WO 95/2511/1)  and ‘prisoners now coming in very fast…received word at 9.30am that 200 prisoners had passed through [Brigade Headquarters]’ (WO 95/2507/2). 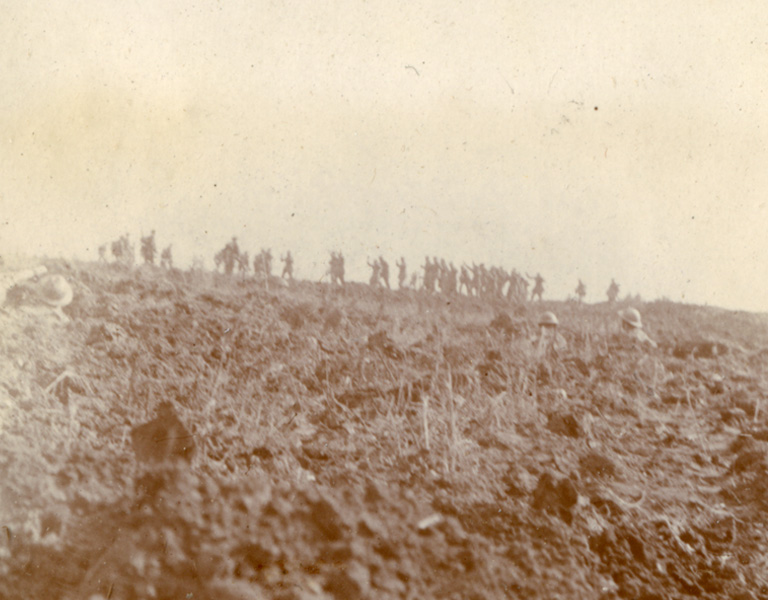 Further embellishment of the first day can be gleaned from reading the war diary of the 109th Infantry Brigade (WO 95/2507/2) and an account written by the Commanding Officer of the 10th Battalion Royal Inniskilling Fusiliers(‘The Derrys’), Major Sam Macrory (WO 95/2491/5). Macrory’s account exemplifies both the pride in his men but also the confusion of minute by minute battlefield manoeuvres. He describes, for example, the intermingling of Ulster battalions at a particular location on the battlefield –the “Crucifix”: ‘Portions of the left Coys were at least 200 yards left of their objective, having followed the wrong direction from the start. The men of our battalion were more or less intermingled with representatives of all other Brigades of the Ulster Division.’ Sadly, all four of the battalions’ commanders were killed or wounded on the morning of 1 July.

Macrory also highlighted the bravery of one particular individual, Lieutenant Ernest McClure, who failed to receive any recognition for his actions as no officer witnessed his courage in holding the Crucifix position. McClure’s body was never recovered. 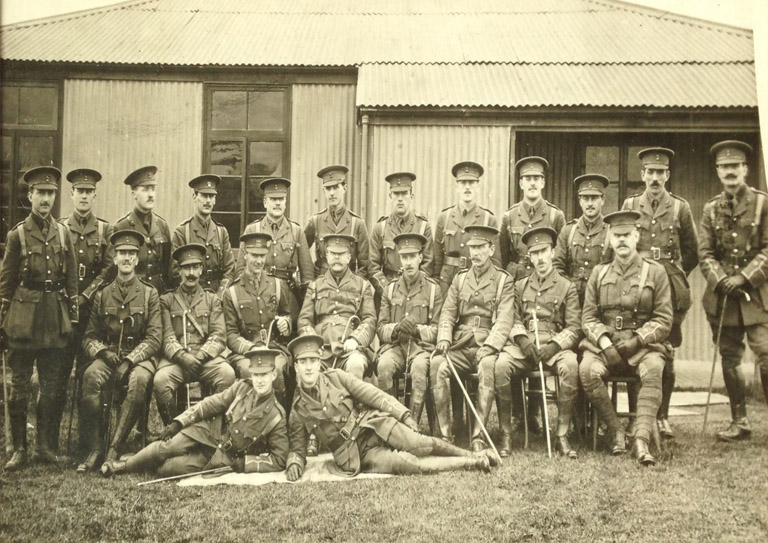 Photograph of officers of ‘The Derrys’, including McClure and Macrory. Image by kind permission of United Services Club, Limavady, Northern Ireland. 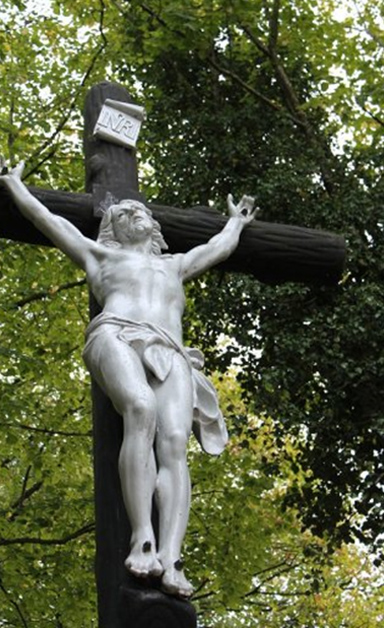 The display also informs the viewer of the part played by the 16th Irish Division and their heroism at Guillemont and Ginchy, south of Thiepval. Both battles are recorded in detail in our WO 95/1969, WO 95/1970 and WO 95/1955/3 records, describing the men of the 47th and 48th Brigades launching an assault with bombs and bayonets, but enduring heavy casualties as part of their own barrage. Part of this attack was Private Thomas Hughes of the 6th Connaughts, who, despite being wounded, took out a machine-gun post and captured several prisoners. He was awarded the Victoria Cross.

Emmett Dalton was a member of the 16th Division, a division composed of mainly Catholic Nationalists who hoped for a form of Home Rule once the war was concluded. Dalton, of the 9th Royal Dublin Fusiliers, was awarded a Military Cross at the battle of Ginchy for ‘conspicuous gallantry in action’. Yet after the war in 1919, he would join the Irish Republican Army (IRA) and fight in the War of Independence (1919-21) against the British state. In WO 35/206, a War Office and Army of Ireland record, he is described as being the co-ordinator of several prisoner escapes during the War of Independence and as a Major-General in the Free State Army during the Irish Civil War. Such was the complexity of the period that men once fighting side by side were later at odds.

The final element of the display explains how  the commemoration of the war became so problematic in Ireland as a consequence of the revolutionary movement, which ultimately led to the partition of the country. Using images and letters from the inter-war period specifically, the research compares the fascinatingly different rationales employed by the new Free State and the province of Ulster in remembering the fallen.

The war was fought by many countries for many reasons, and my research on the Irish contribution to the Battle of the Somme attempts to bring into focus the stories of the individuals on the ground, as well as the intense backdrop of political and social motivation that proved a particularly unique endurance for Irish soldiers.

‘It’s a Long Way From Tipperary: The Irish on the Somme’ will be on display in the first floor reading rooms, 1 July-17 September.

The panel display also touches on many of the themes discussed in The National Archives’ upcoming symposium Ireland and 1916: Isle of Saints and Soldiers? (Saturday 18 June). For more information or to book tickets, visit our website.