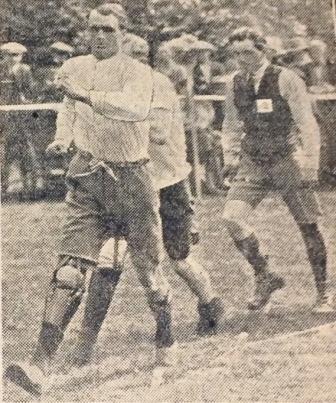 Did you think the recent Invictus Games, held for wounded, injured and sick service personnel, was a new idea? The First World War brought disability under a public spotlight – and one of the ways it did so was through sporting events.

As it is Disability History Month, an annual event which creates a platform to focus on the history of disability and the social impact of disablement on individuals across time, it seemed the perfect opportunity to focus on this sports event. In this post I will concentrate on the aftermath of the First World War, particularly the self-driven activity of disabled war veterans.

With the current focus on the First World War it is easy to forget that consequences were felt far beyond the 1914-1918 conflict, into decades and generations. One of the easiest things to overlook is the number of men, and indeed women, injured in the war who had to live their daily lives with physical and mental impairments as a consequence. Servicemen and civilians were directly and indirectly affected by the conflict. Both in the trenches and on the home front, from the predictable gunshot wounds to tropical diseases, from explosions in munitions factories to zeppelin raids.

On 14 September 1922 an event was held that was hoped would ‘have a beneficent effect on the future of limbless men in the district’ (PIN 38/474). The event was a sports day held by the North-west of England Limbless Sports Club for disabled ex-servicemen. Newspaper clippings in our files show the day enabled veterans injured in the conflict to engage in team and individual sporting activities from football to obstacle courses. 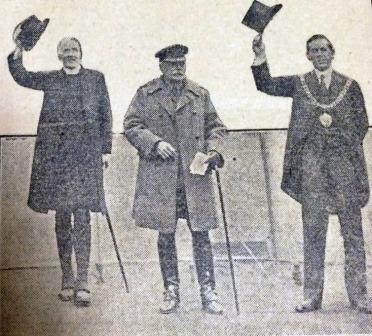 The sports day was opened by the notable figure Earl Haig and attracted lots of press attention. Although, as notable historian in the area of disability Julie Anderson notes, special events were often ‘staged for distinguished and important guests’. 1 However it was arguably this kind of publicity across the country that gave disability an undeniable presence and attention in society it had not received prior to the conflict.

The day’s events consisted of many different types of activities from football to a keenly contested high-jump competition, the specifics of which are recalled in detail in the cuttings. The last competitors in the event were Fleetwood of Bolton, S. Walklate of Silverdale, and J. Mallin, of the North of England Limbless Sports Club. The article remarks: ‘To the spectators it came as a surprise that these men are able to run and jump in such an agile way’ (PIN 38/474).

From the medical perspective this event was also used to showcase the ability of prosthetic limbs, demonstrating the potential ‘freedom of joints and poise of the body’ (PIN 38/474). Sport at this time was noted to aid physical and mental recovery. 2

These newspaper clippings can be found in a file principally about Dr Hort’s Eltringham’s Exercises, a system of physiotherapy to aid those with prosthetic limbs. Holding this kind of event was a perfect way of showcasing the positive effects of such exercises. Dr Hort was a superintendent at Grangethorpe Military Hospital in Manchester at this time, which from 1916 specialised in orthopaedic care. The site was dominated by rehabilitation spaces, such as a gymnasium and rehabilitation workshops. It was therefore appropriate such an event would be held here. 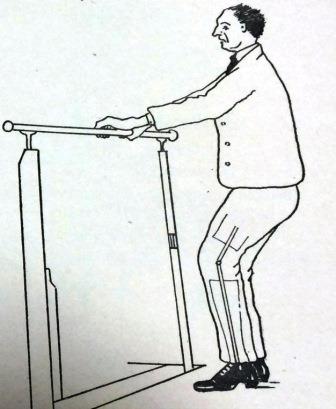 The document PIN 38/474 includes a pamphlet entitled ‘New Legs for Old’, showcasing the possible exercises. The drawing opposite demonstrates a bending exercise recommended to those with prosthetic legs.

Technology during and after the First World War hugely advanced due to the vast demand from wounded soldiers. Artificial limbs were developed for many different conditions, from use in hot climates to use in factory work for disabled men being trained in other forms of war work. The amount of files on artificial limbs in our collections, just one technological advance for one possible disability, is overwhelming. However there are many other areas to explore, from Braille watches issued to blind veterans at St Dunstan’s, to the development of hearing aids.

Often the disabilities, and consequential technologies, become hidden when catalogued in the language of the time. Would you have searched for hearing aids under electrophones? Our Disability research guide offers advice on searching.

Disability history is an ever expanding area of historical research, but the attention of the First World War is a brilliant opportunity to maximise this exposure and impact. With this in mind there will be a series of blog posts over the coming months to highlight the role of medical technologies in, and as a consequence of, the First World War.

Look out for my colleague David’s next post in January.