Information Management in the movies

Welcome to my blog! Let’s begin by setting the scene…

In December 2011 the Cabinet Office published the Information Principles for the UK Public Sector as part of the wider UK Government ICT Strategy. The National Archives both helped in the development of these Principles, and continues to support the public sector in implementing them.

How do you write an accessible blog about this piece of guidance, I hear you ask? Well, whilst watching The Shawshank Redemption last night I had an idea: Could I explain how the seven Information Principles work using examples taken from the movies?

So here they are, the Information Principles at the movies. (Caution: spoiler alert!)

Three hapless American teens are trying to escape the woods and the elusive ‘Blair Witch’. Their only reliable means of navigation is a map, which is thrown into a river by one of the characters, leaving them lost in the woods to be killed by the witch.

This low budget horror flick is a simple analogy for valuing information. The map is an information asset; it holds the key to achieving their requirements (namely, survival). Having failed to value it, they end up doomed to waste time and resources, and are ultimately killed off by the Blair Witch.

The Jedi Temple is home to the Jedi archives – seen as the definitive resource for information about the galaxy. When Obi-Wan Kenobi questions the omission of a particular planet, the archivist replies “if an item doesn’t appear in our records, it does not exist…”

In the movie, the archives have been altered by a rogue Jedi looking to hide the existence of a Clone army. Good information management means that we know when records are moved or deleted through authorised and auditable processes. If we don’t protect our information and understand where it is, then our information can’t protect us. 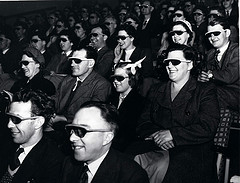 Indiana Jones races a team of Nazi archaeologists to uncover the secrets of the Ark of the Covenant. Instructions to locate the burial place of the Ark are engraved onto a gold medallion. One of the Nazis brands his hand with half of the medallion when it’s thrown into a fire, but leaves the whole object behind.

Information forms the basis of the decisions and actions that we take, so it needs to be of sufficient quality. In this case, the accuracy and reliability of the information was compromised by its incomplete nature – only with both sides of the medallion could Indiana Jones find the correct location of the Ark.

Not strictly a movie but; Jack Bauer relies on linking different sources of data to help stop terrorists. In series eight the CTU overlay a street level map with a plan of the subway, integrate a list of disused bank premises, then cross references with the train timetable in order to identify the terrorist hideout.

Each individual piece of information had value, but when put together they provided an even greater insight. The opportunity for exploiting the value of information is greatly increased when it is available in standardised and linkable forms (for example, using widely accepted Open Standards).

Once again the Empire threatens the Galaxy with the Death Star, and once again the Rebel Alliance must destroy it. Cue fireworks and dancing Ewoks…

Humanity is threatened by a comet which is on a collision course with earth. The government (headed up by Morgan Freeman) knows about it, but refuses to publish the information until a journalist uncovers the truth.

Could humanity have prepared their own bunkers or shelters had they have known sooner? Could an alternative answer have been crowd sourced, instead of sending Robert Duvall into space? Responsible approaches to publishing public data can stimulate growth, improve accountability and reduce information management costs in the long run.

7. Citizens and businesses can access information about themselves: Memento (2000)

Leonard Shelby is trying to find the man who killed his wife, but the attack left him with short-term memory loss. Accessing information about himself is therefore vital to solving the crime, and fragments of information he finds he tattoos onto his body for safe-keeping.

Access to your own personal information by request is covered by the Data Protection Act 1998. Leonard Shelby tattooed himself with his own personal data which meant he could not only keep it secure, but could also access it whenever he needed to.

Thanks so much for reading, and I hope this was an enjoyable introduction to the challenges of keeping records in digital form. ‘Stay tuned’ for more Information Management blogs!