I am going to start this blog post by asking a few questions. If faced with compulsory military service today, what would be the impact on our own individual lives? Would we need time to settle our domestic responsibilities before being able to serve? Would it be in the national interest for us to stay in the employment, training or social role which we currently hold? And what personnel would businesses and industries require to ensure the continued support to our local communities, especially the young and elderly?

Fortunately for us in Britain today these questions are purely hypothetical but 97 years ago (give or take a few days), on 27 January 1916, the British Government passed the first Military Service Act, meaning compulsory military service for every British male aged between 18 and 41 who was either unmarried or a widower without children. Exemption could be granted from this conscription into the military forces with a Tribunal system established to hear applications and appeals at local district or borough level, County appeal and a final Central appeal level in London.

The examples used for today’s post are taken from just one of the 104 boxes of case papers in our collection of Middlesex Appeal Tribunal case papers in our record series MH47, specifically the first box of case papers filed by the Tribunal for men conscripted directly by The Military Service Act (coded with a letter ‘M’) in 1916. Crucially these case papers highlight how the Military Service Act impacted upon individual households, local communities, local businesses and national industries but they also underline the delicate manpower decisions faced by the Tribunals when hearing applications or appeals for exemption. 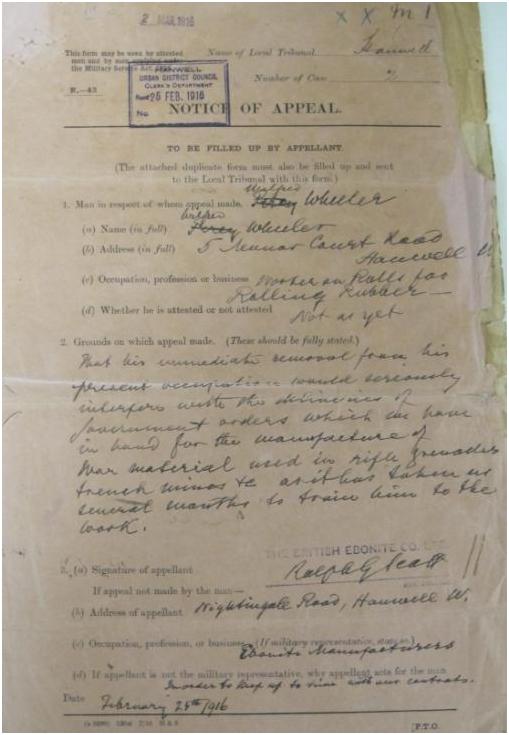 Appeal form of Wilfred Wheeler, ‘M1’, which details the reasons of appeal from his employer The British Ebonite Company Limited

The first case paper filed by the Middlesex Appeal Tribunal, coded ‘M1’, was an appeal for exemption for Wilfred Wheeler. In fact, it was not Mr Wheeler who was applying for exemption, it was his employer. The British Ebonite Company Limited claimed that Mr Wheeler was an essential employee in the war industry of rubber manufacturing and that it was in the national interest that he should remain in this role (see picture, left). The appeal form submitted to the Tribunal states that removing Mr Wheeler from this role would “seriously interfere” with the company delivering orders of “war material” including “rifle grenades” and “French mines”. Crucially, the Military Representative outlined that without any prior experience in this industry and only with six months service with the company, Mr Wheeler could easily be replaced by an inexperienced colleague or new employee who fell outside the stipulations of the Military Service Act (see picture, below right).[1] The appeal was rejected by the Middlesex Appeal Tribunal and Mr Wheeler was called up to serve. 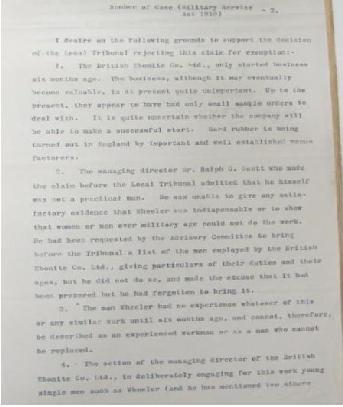 A little further on in the same box (MH 47/8) we come across two individual appeals for exemption from two chemists. Case paper ‘M44’ being for Frederick Charles Williams of Ealing and case paper ‘M53’ for Vincent Cornelius Ellis of Northwood. Interestingly both men indicated that their employment included the dispensing of medicines under the National Insurance Act of 1911, which was described as being an essential role in meeting the needs of the local communities to where they worked.[2]  Despite this claim, both appeals were dismissed by the Appeal Tribunal. 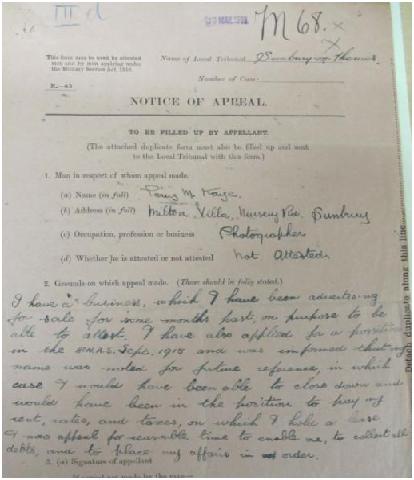 Finally for today’s post, I offer the case of Percy Kaye of Sunbury. Case paper ‘M68’ reveals that Mr Kaye was intending to serve, having already approached the Royal Naval Air Service in September 1915 (see picture, left). His appeal against conscription is based on needing more time to settle his photography business interests, specifically to collect the debts owed to him before being called up. Although the local tribunal at Sunbury-on-Thames rejected this application, they did suggest that the Middlesex Appeal Tribunal might find it justifiable to grant a temporary exemption to allow these responsibilities to be tied up.[3] The Appeal tribunal dismissed the appeal but unfortunately do not provide any details as to why.

These examples indicate just a few of the many different ways in which the Military Service Act impacted upon British society between 1916 and 1918, be it upon the independent business owner (Mr Kaye), key personnel to local communities (Mr Ellis and Mr Williams) or the manpower concerns of essential industries (British Ebonite Company/Mr Wheeler). What we can also begin to see however, is that Tribunals were not only expected to ensure a suitable supply of men for military service by rejecting unjustifiable appeals for exemption but also how the Tribunals were faced with delicate act of balancing the needs of the military with the needs of essential national industries as well as the needs of local communities.

I hope these few examples therefore help to highlight the complexities of deciding what was ‘in the national interest’ between 1916 and 1918 when hearing claims for exemption from conscription. Likewise, I hope that as the project develops, we can continue to highlight the many legitimate reasons why exemptions were requested, so to move away from stereotypical assumptions about those that did not serve during periods of war.

I’d like to take this opportunity to thank our project team of staff and volunteers – Linda, Jean, Chris, Kate, Mark, Elizabeth, Maureen, Susan, John, Roy and Nigel – for all their hard work in re-sorting and preparing the MH 47 records for scanning, which has now commenced. This will be followed by quality assurance work of the scanned images before a process of transcription.

You can keep up to date on the progress of our collaborative project with the Friends of The National Archives and the Federation of Family History Societies by visiting our project webpage.

If you are interested in volunteering with The National Archives, please see the volunteering section of our website, where any new volunteering projects are detailed as and when they commence.