For this blog post I will be looking at Edward Bawden’s mural ‘Country Life’, commissioned by the Design Group of the Festival Office for the Festival of Britain (1951). It coincides with the current exhibition on Edward Bawden at the Dulwich Picture Gallery (23 May – 9 September 2018).

Edward Bawden (1903–1989) was an illustrator of things, a painter of life. Bawden produced work that was immediately comforting, reassuring and at the same time, unusual. His work of the wondrously ordinary was brought into being in the form of prints, book covers and posters, as well as sizable commissions such as large-scale murals. 1

It seems that he wanted the largest possible number of people to engage with his work, given the type of commissions he undertook. Nowadays it’s hard to pass a bookshop or card shop and not see one of his illustrations.

Along with others like Eric Ravilious (1903-1942), Bawden developed a visual palette that was a very distinct way of looking at life; it was very separate from other art forms developing in post-war Britain. 2 His work is accessible,and therefore it was no surprise that he was commissioned to design and execute a mural for one of the pavilions at the South Bank site of the Festival of Britain. 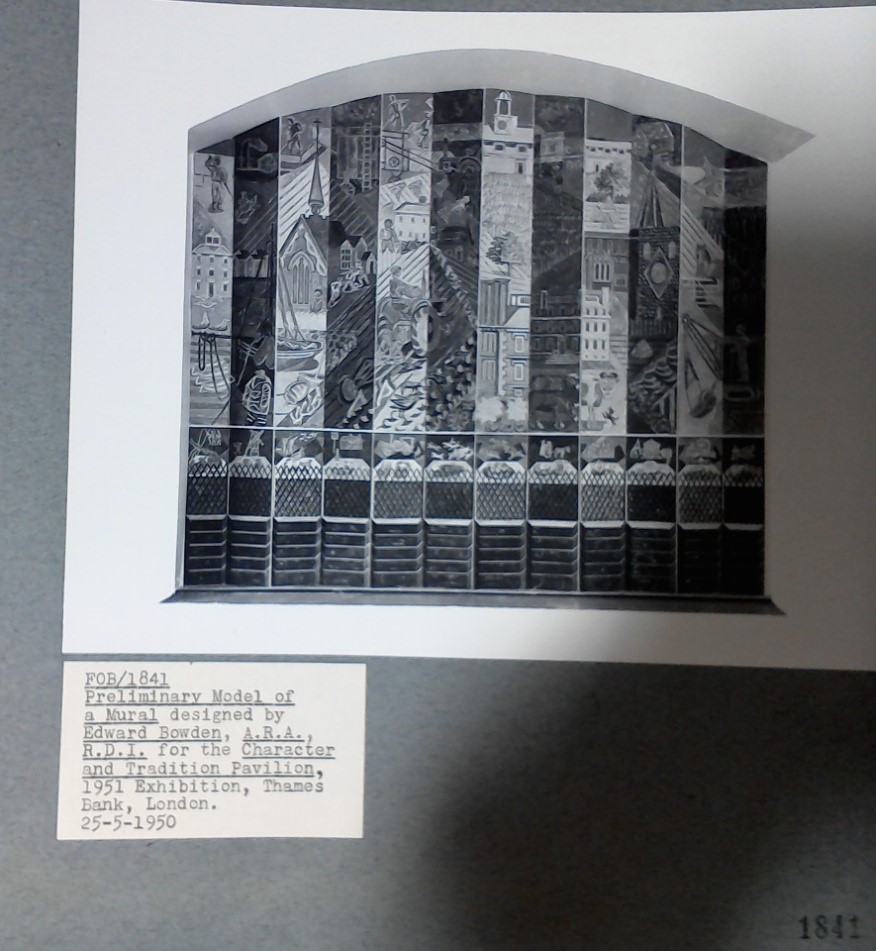 The Festival Office felt Bawden might be suitable to produce more than one potential work. It was not uncommon for artists and designers for the Festival of Britain to have their name put forward for, or to receive, more than one commission. 3 However, it was a mural commission Bawden was offered, which he completed and which was displayed at the Lion and Unicorn Pavilion.

The ‘schedule of work’ in the contract between artist and commissioning body outlines the specification: ‘to execute a mural painting to be assembled as a single faceted screen wall, approximately 45” x 40” […] in accordance with the sketch model already submitted by Mr. Bawden and approved by the Presentation Panel’. 4

Charlotte Bawden (née Epton), his wife, replied to the Festival Office: ‘my husband is in Canada for the British Council […] until the end of September.’ They contacted Bawden while he was teaching at Banff School of Fine Arts, the University of Alberta. He had accepted a Visiting Instructor post in Canada in 1949. The correspondence charts the confusion around dates for completion and delivery of the mural. 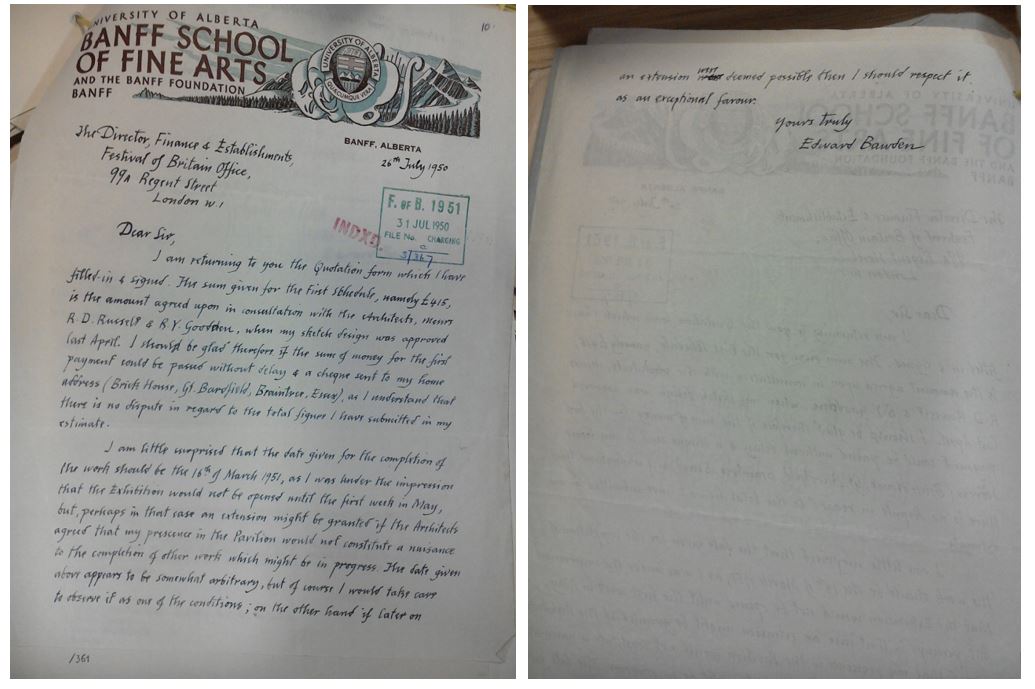 At the Lion and Unicorn pavilion, South Bank

The execution of the mural was assisted by artists Sheila Robinson, Walter Hoyle and Bryn Alderidge. 5 The mural was made up of 72 panels. You can also see from the photograph (below) how imposing the mural was and the potential impact on visitors to the pavilion. 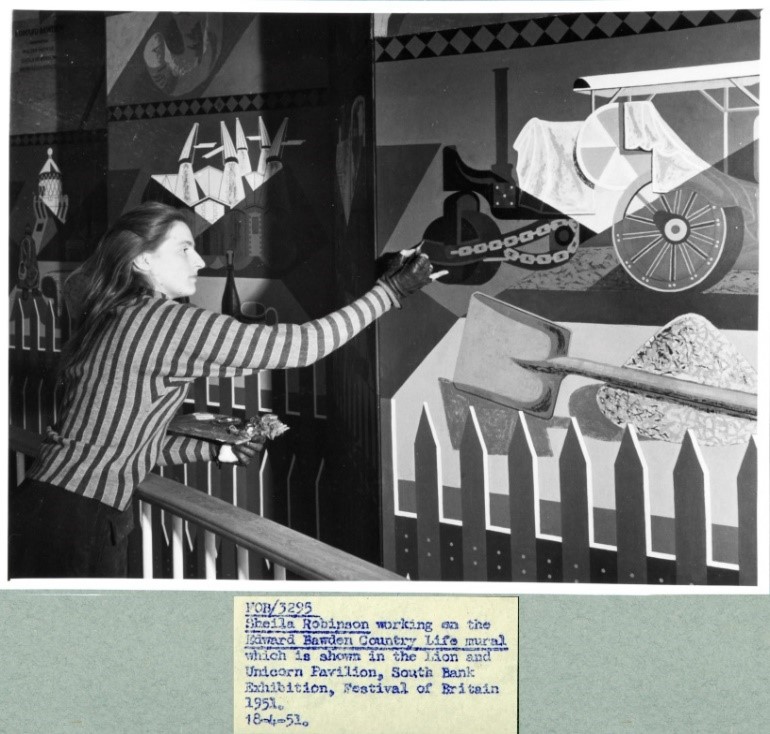 Robert Russell, designer of the Lion and Unicorn pavilion at the South Bank site, recounted details of the mural:

At the far end of the gallery the visitor was faced by a very large mural painting by Edward Bawden occupying the full length and width of the end wall, which here, to give rigidity to a very light structure, was crinkled into angled vertical facets, like the leaves of a partly opened fan, but each about six feet in width. His theme was Country Life in Britain. 6

Into storage then ‘disposal’

Once the Festival of Britain closed in September 1951, Bawden’s Country Life was put into temporary storage (Ministry of Works ‘Barry Road stores’). The file which records the ‘deposal of mural’ reveals more. The original plan was to get the Ministry’s architects to relocate it in a new building at some point. However, no opportunity arose, and it was decided that the mural be disposed of – to an organisation willing to pay for transport costs. 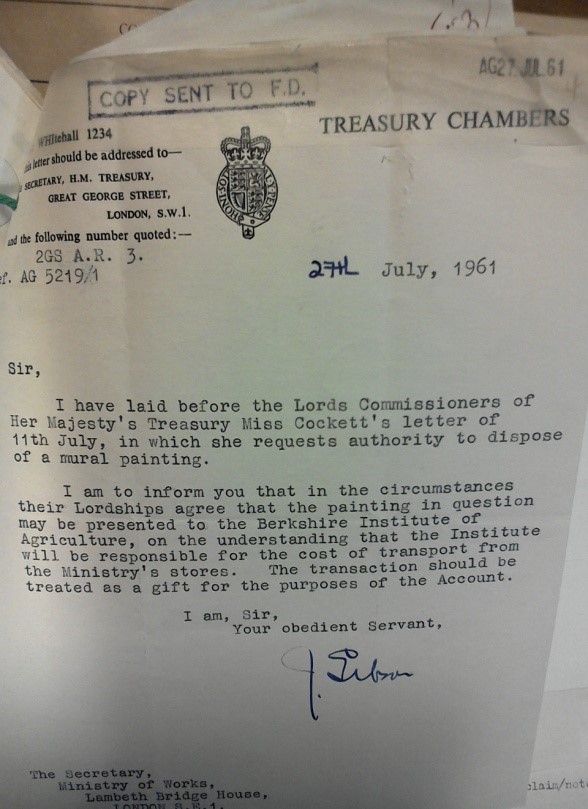 It seems that the attitude at the time was this mural had no monetary value. In a letter dated 11 July 1961, the secretary of HM Treasury wrote: ‘It has been impossible to assess even the nominal value of the work; its decorative value is a matter of opinion and it is not considered saleable for any other purpose, or even as firewood.’ 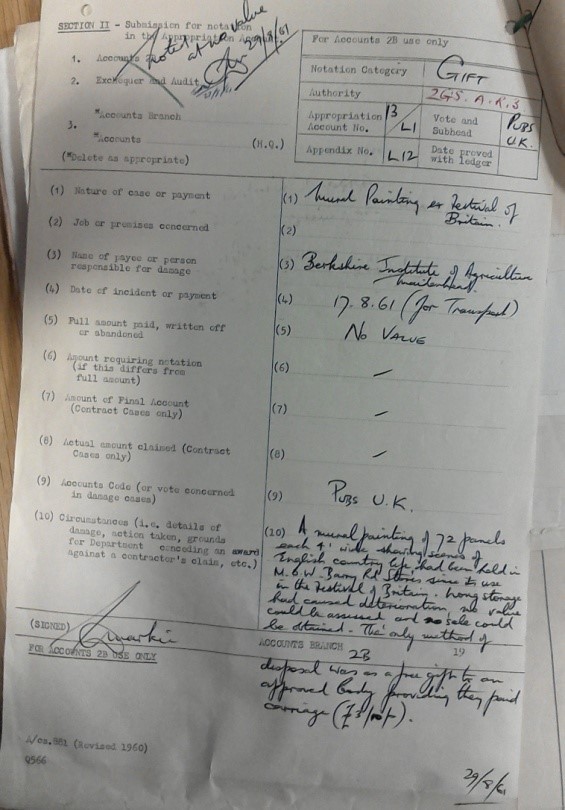 Finding a home for Country Life

Many institutions were approached, particularly those  with an agricultural specialism. It was decided that Berkshire Institute of Agriculture was an appropriate place for deposit, and the Institute was happy to accept. The mural was dispatched from Barry Road stores in June 1961, ten years after the Festival of Britain. 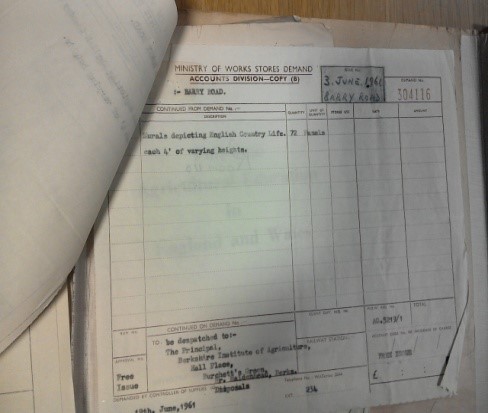 In the search of Country Life, I realised that the document trail has gone cold. There seem to be no surviving records from the college, nor any physical traces or accounts which can verify what happened to the mural. All we know from the file ‘disposal of mural’, was that ‘although the mural has been carefully stored, it has suffered in the process’. 7

Not all works were made to last. Some were subjected to haphazard treatment after being removed from display – some were lost, damaged, moved or even destroyed. And, unfortunately, this is true of many post-war public commissions from the Festival of Britain and other commissioning bodies. 8 The wider precarious position of post-war Public Art was brought to the fore in the Out There exhibition by Historic England at Somerset House in 2016.

Despite this, Bawden’s legacy and designs still remain embedded in everyday (if not in country) life. If you ever happen to be travelling on the Victoria Line on the Tube in London, as I do on my daily commute, you will see his tile designs ‘Ferry across the River Lea’ at Tottenham Hale, and ‘Queen Victoria’ at Victoria station.

Edward Bawden at Home exhibition at The Fry Art Gallery

Investigating the letters behind carving and shaping stone (Barbara Hepworth)

Behind the scenes of organising an exhibition: Modern Brazilian Paintings (1944)