It’s getting closer… Not so close that you need to panic: there’s still plenty of time to buy presents. But it is close enough that you need to grasp the nettle and dust off the credit card, find the list and look out all that wrapping paper you bought in the January sales: now is the time to act. Would you like some help with ideas for gifts? Of course you would.

What I’d like – if I hadn’t bought myself one already, obviously – would be a copy of Lady Fanshawe’s Receipt Book. This is my top read at the moment. Lucy Moore’s book explores the life of Lady Anne Fanshawe though her much-treasured book of recipes and remedies. The lives of women in earlier times often leave a light footprint; however, one way you can get to know them is through their treasured personal commonplace books and collections of notes gleaned from friends and family members. These echo their trials and celebrations, whether through remedies to alleviate the pains of childbirth or sugared confections to celebrate a bethrothal. Lady Anne’s life as she followed her exiled Royalist husband in the aftermath of the Civil War was not an easy one: she bore 14 children, nine of whom died in infancy, but stoic and resilient she carried on.

Another interesting way of exploring history is shown in Stephen McGann’s Flesh and Blood. This exploration of family history takes an unusual tack (perhaps not recommended for the ultra-squeamish) of investigating the maladies and wounds which afflicted his forbears. In doing so he uncovers not only their stories but also a lot of social history from the times when they lived. His ancestors experienced famine and poverty, served on the Western Front and even survived the sinking of the Titanic. It is an absorbing story told with both wit and compassion and tells us as much about our own past as it does about his.

For serious military historians, you could consider Rat’s Alley. Peter Chasseaud’s masterly work has been completely updated and revised and now covers over 20,000 trench names, complete with map references. It is an essential tool for the military and family historian. if you were feeling frivolous, pop one of our National Archives rats in the parcel (did you know that The National Archives owes its very existence to Henry Cole and a rat?). Or what about Photographing The Fallen? This book draws on the archive of Ivan Bawtree, one of the three professional photograhers who worked with the Graves Registration Unit on the Western Front from 1915 to 1919, recording the graves of the dead for their grieving relatives. 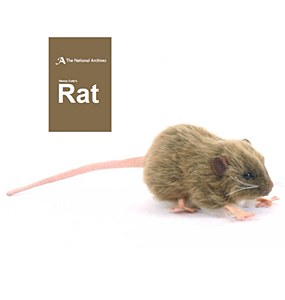 A book which makes you think is always a great gift and Lawrence Freedman’s The Future of War is one such tome. Surveying the last two hundred years of conflict, Freedman presents not so much a history of war as an exploration of what war means and how the boundaries between peace and war – between the soldier, the civilian and the criminal – are becoming increasingly difficult to define. He ranges through history and literature looking at mankind’s desire and even his need for warfare and questioning where this will lead. It is a fascinating and insightful read.

Keen armchair travellers can explore Britain via its literature in Britain By the Book which travels the country discovering interesting snippets and literary associations in the most unlikely of places. Or you can bag a bargain with The Traveller’s Year, a fascinating anthology of extracts from travellers’ letters and diaries from the 16th century onward which we have reduced from £25 to £9.99. If you are more interested in what never made the page then Censored is a fascinating exploration of the profane and the political (or just plain shocking) literature that has been suppressed through the centuries and the hows and whys of literary censorship.

If you are looking for trifles to fill the stockings then consider a beautiful glass paperweight unique to The National Archives and featuring the unusual design of a sailors’ round robin. Or perhaps a Battle of Hastings pencil topped with a Norman helmet? (Of course we would have pencils – we are The National Archives,  after all – and we can provide a pencil sharpener shaped like a medieval catapult to go with it.) Or you may prefer some delightful book plates featuring medieval dragons.