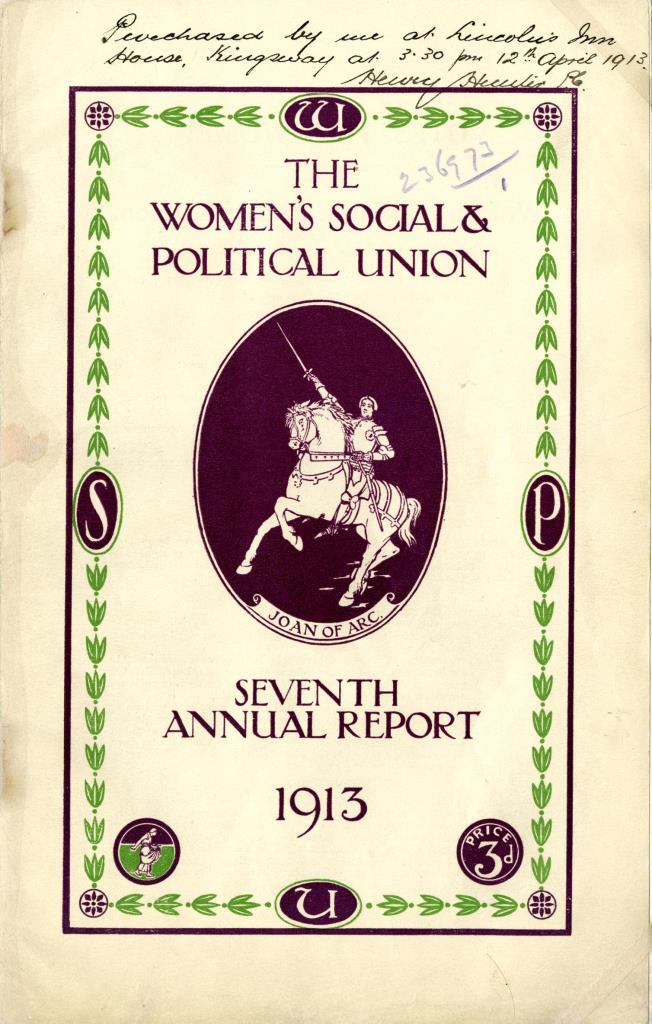 Seventh Annual Report of the Women’s Social and Political Union, 1913, as purchased by police from their headquarters at Lincoln’s Inn House. Reference: HO 45/10700/236973.

This year marks 100 years since the passing of the Representation of the People Act 1918, which gave some women the right to vote, and opened the door to voting on equal terms in 1928.

Over the next year, the Suffrage Flag will travel around government departments and agencies across the UK as a way of celebrating the centenary, and we’re delighted to be one of the host organisations.

This ‘Suffrage’ flag uses the distinctive purple, green and white of the Women’s Social and Political Union (WSPU). This was the more militant of the suffrage organisations, often called Suffragettes. After 60 years of peaceful campaigns, the WSPU formed in 1903 and engaged in campaigns of civil disobedience. As repeated conciliation bills failed to gain traction in Parliament, militant methods continued to escalate. The types of militant protests were wide ranging; the suffragettes engaged specialist chemists to manufacture explosives, cut telephone wires to bring down government communications, and engaged in mass window smashing campaigns across London’s West End.

The WSPU chose these colours to reflect white for purity, purple for dignity and green for hope. From their foundation, the WSPU had been good at marketing their image to the wider public. They sold merchandise in these striking colours to advertise their cause and fundraise. It is telling that these are the colours often still associated with the suffrage movement today. The front of their headquarters at Lincolns Inn House held a sale room, which sold various types of suffrage literature, packets of tea and playing cards. Indeed, our records show police officers covertly buying suffrage literature from this store.

There were, however, also dozens of other societies, most with their own colours, mottos and methods of campaigning, from the Actresses’ Franchise League to the Men’s Political Union for Women’s Enfranchisement. Societies such as the WSPU, who did not allow male members, often had equivalent male partner organisations. Striking black and white photographs from the era show the banners and processions, but what they hide are the colours of the many societies. Indeed, the most likely to be seen would have been red, green and white: the colours of the largest suffrage society, the National Union of Women’s Suffrage Societies. Sadly, these colours are less widely associated with the suffrage movement now. 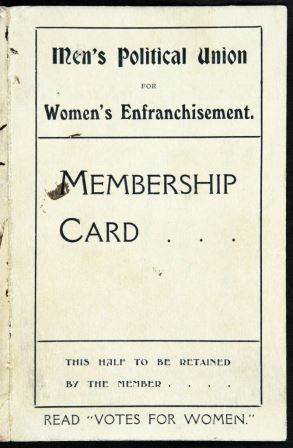 So often, history polarises the suffrage movemen; however, there were huge amounts of cross membership. The suffrage movement has a complex history that has so often been simplified to ‘Suffragettes’ and ‘Suffragists’, who used constitutional methods to campaign. However, it was rarely this clear-cut. Groups such as the Women’s Freedom League took direct action but in less extreme forms than the WSPU, such as the mass census boycotts of 1911. Some groups centred around professions or religious groups, while others focused on the methods of campaigning. For example, the Tax Resistance League used tax avoidance as a means of direct action, proclaiming ‘Taxation without Representation is Tyranny’. 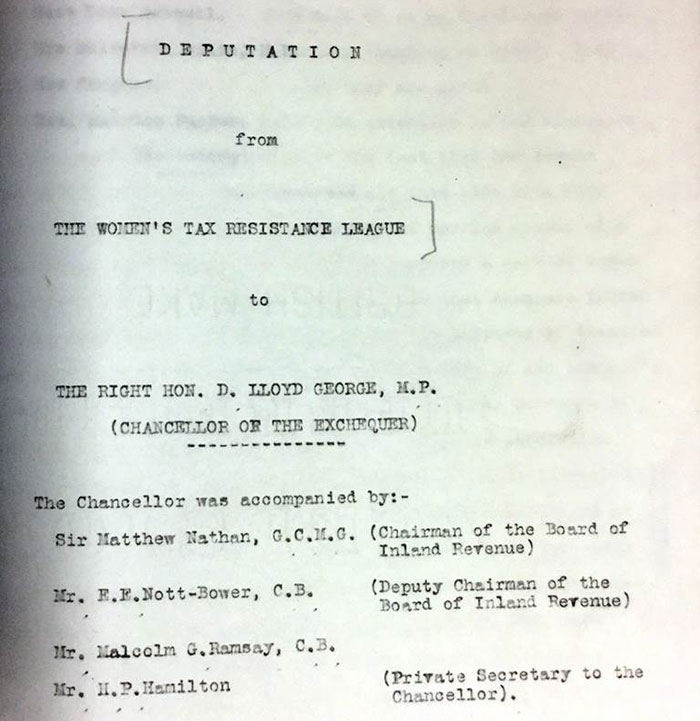 Many of these groups merged and broke away from each other throughout this long period of campaigning. The WSPU was accused of being authoritarian and undemocratic; its militant methods also isolated people in their own organisation. Break-away groups formed as a consequence, including the East End Federation of Suffragettes (ELFS), a group formed from branches of the WSPU in the East End of London by Sylvia Pankhurst. The ELFS radically supported the vote for all men and women irrespective of class; they continued to adopt the purple, white and green of the WSPU, but it was now also streaked with red for socialism. 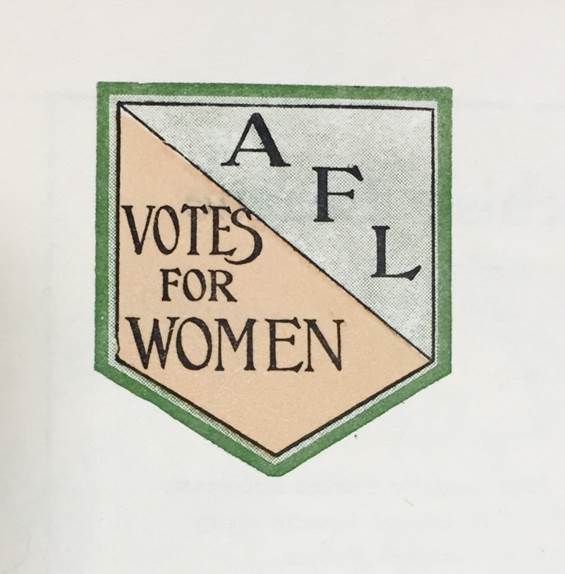 The WSPU are also more predominantly remembered because of their militant methods, which attracted greater public attention, as they intended. They gained wider publicity at the time for it, and in the century since.

Flying this flag is a way of remembering all suffrage societies and individual who fought so hard for the vote.

For the next stage of the tour, the flag will be visiting Kew Gardens, which has its own unique suffrage heritage. On 8 February 1913 the tea pavilion was burnt to the ground by two suffragettes – learn more about this act of suffrage militancy. 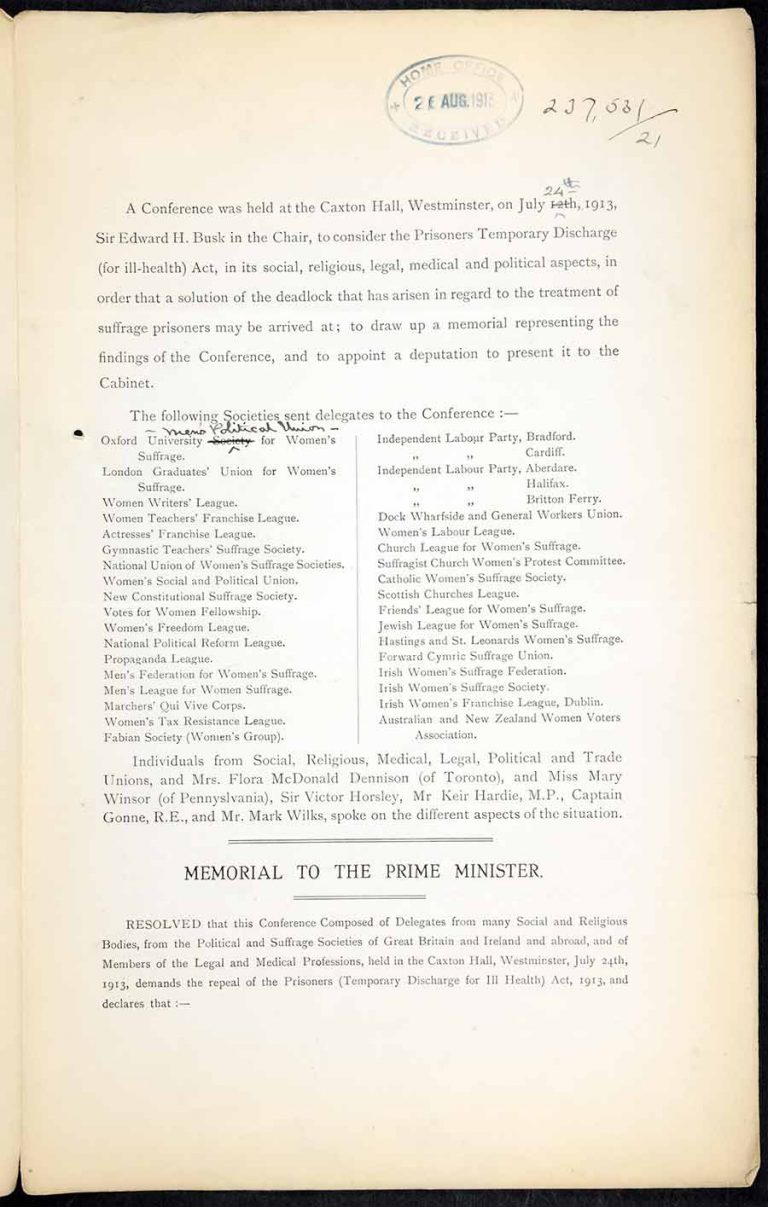 List of suffrage societies sending delegates to a conference regarding force-feeding. Reference HO 45/17879