This month sees the 100th anniversary of the sinking of the hospital ship Britannic, the sister ship of Titanic and Olympic, constructed by the shipyard Harland and Wolff for the White Star Line.

Britannic, Olympic and Titanic were constructed from the same general design, and originally to very similar specifications, although their dates of construction differed since the shipyard did not have the capacity to construct all three at the same time. As a result Olympic was launched first, in 1910, and began its passenger run in 1911; Titanic was launched second and began its passenger run in 1912. Britannic was the last to be completed. 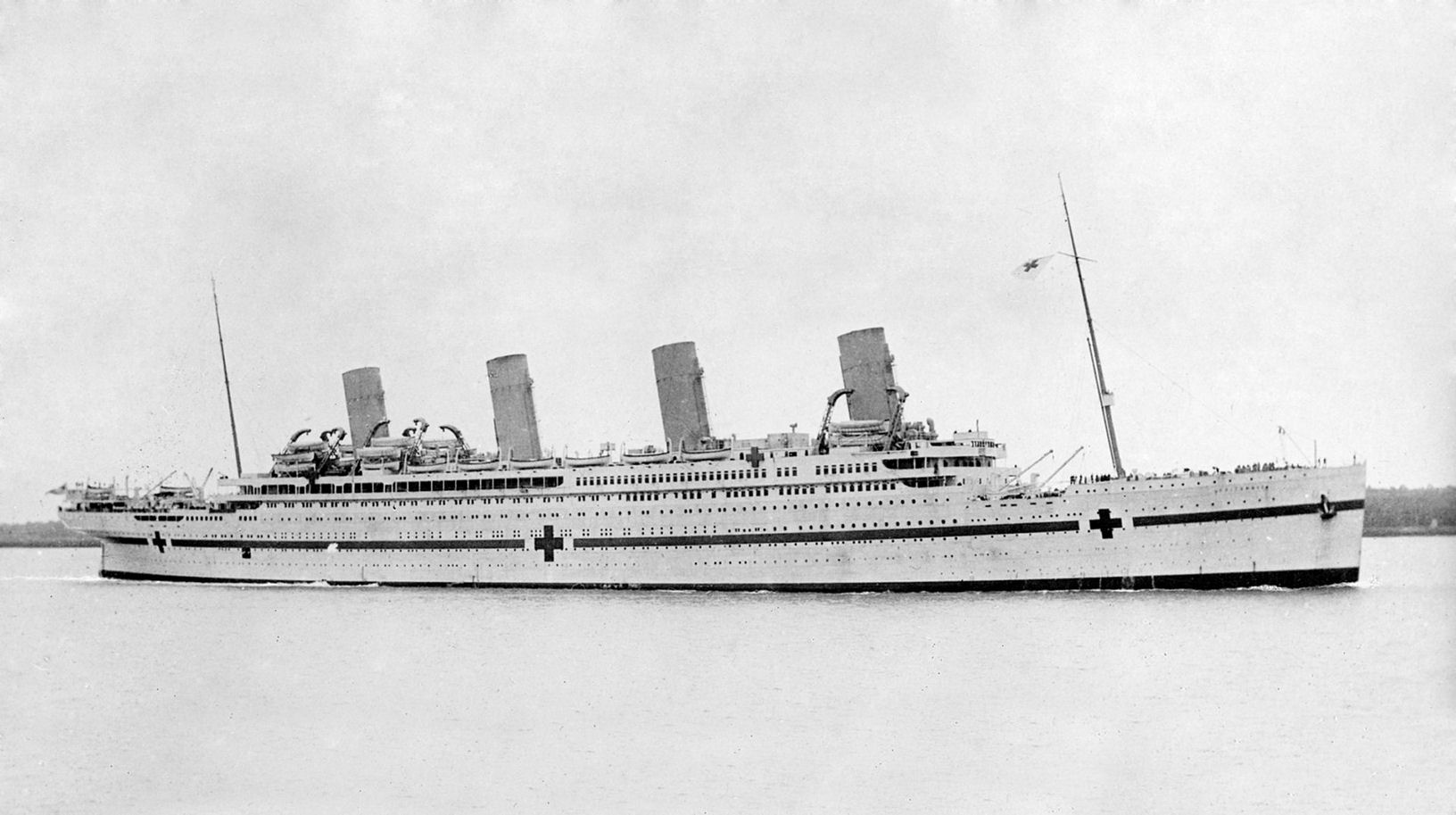 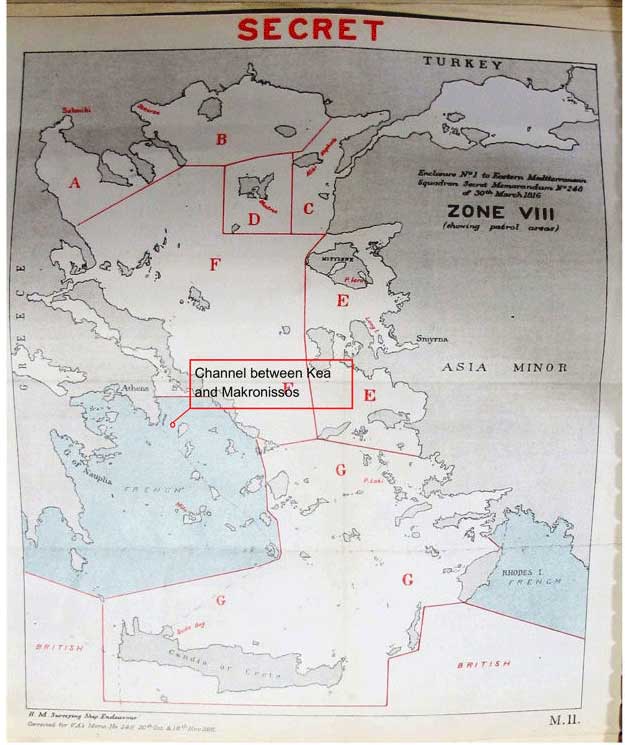 Requisitioned as a hospital ship in November 1915, Britannic never had the opportunity of fulfilling its role as a passenger ship on the lucrative Southampton to New York run. Instead, after completing only five voyages repatriating the sick and wounded from Salonika and Mudros, the ship struck a mine in the Zea (now Kea) channel, in the Aegean Sea, on 21 November 1916.

Britannic took less than 55 minutes to sink, an even swifter fate than that of Titanic only four years earlier.

There isn’t space in a blog to recount in full detail the history and particulars of such a well-documented ship, but there are plenty of primary and secondary sources any researcher can turn to quite easily. Instead I would like to concentrate on some personal aspects and then move on to what you can find out about Britannic here at The National Archives.

For me the ship has a personal connection. My great grandfather William Thomas Cronan was a greaser on board Britannic. A greaser worked in the engine rooms and was responsible for greasing or oiling all of the movable parts. This was William’s first voyage on Britannic, but he had been in the Merchant Navy before the war and had already seen active service on the coastal ship Solent Queen. He would go on to survive the torpedoing of the SS Moyune in April 1918, so he had quite an eventful war.

After the war he went on to serve on Olympic, and on the Cunard ships Mauretania and Queen Elizabeth; unlike Britannic, he did at least get to spend many years on the transatlantic run. By a strange twist of fate, another great grandfather of mine lost his life on Titanic.

Although, strictly speaking, the word Britannic simply means of or belonging to Britain, the term also represents the spirit of Britannia, the female personification of Britain still present on our banknotes, and evocative of the nurturing mother country, simultaneously fostering and protective.

The launch of Britannic was delayed because of the sinking of Titanic, in order to fulfill the improvements necessary to comply with the new Board of Trade requirements, which included being equipped with sufficient lifeboats to accommodate both passengers and crew. This enabled the White Star Line to alter the name allegedly planned for the ship: ‘Gigantic’. That name was rather too close to Titanic, the ill-fated sister ship, a point not lost on the owners. Emerging instead into the heat of the First World War, a patriotic and evocative name was deemed more appropriate. 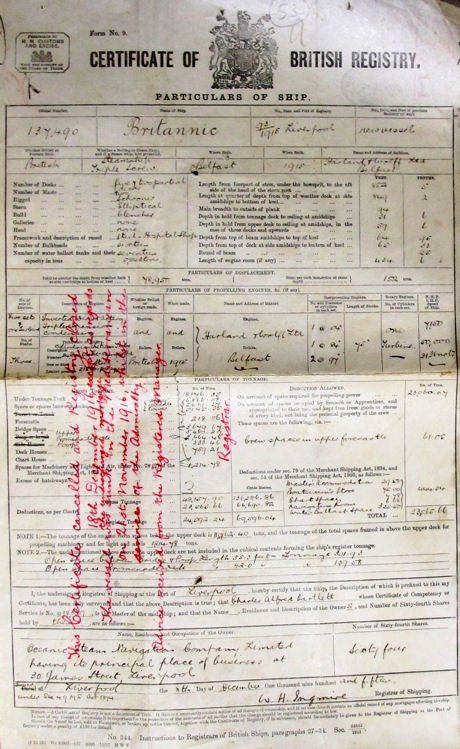 The National Archives is very fortunate to have many of the most crucial documents surrounding Britannic, from its construction through to its voyages, and to its sinking and to the diplomatic furore that this engendered. The certificate of British Registry for Britannic may be found in BT 110/260/53 within the closed registries series. As well as highlighting its full specification, ownership and mortgagees, the document is rather poignant as it is also the official document for removing the ship from the registry system. The first page is overwritten in red ink with the words:

‘This certificate cancelled and registry closed 18th December 1916, except as regards the undercharged mortgage. The vessel was sunk in the Mediterranean on 21st November 1916, whilst in the service of the Admiralty.’

Although we do not have the ship’s crew lists and agreements, we do have the ship’s logs, which you can find on Discovery, our catalogue, under the reference BT 165/1690. The logs were filled in by the Britannic’s master or captain, Charles A. Bartlett, and make for very interesting reading.

As well as detailing the dates and hours of arrival and departure at all ports visited, the log provides a full listing of crew, the capacity in which they were engaged, a rating for their character and conduct while on the voyage and remarks upon any incident.

As a note of caution the final log details the last three voyages, and during this period a number of crew would have been discharged or have deserted; in addition, others were taken on at various ports to make up the complement. These need to be taken into account when assessing the crew who were on board at the time of the sinking. 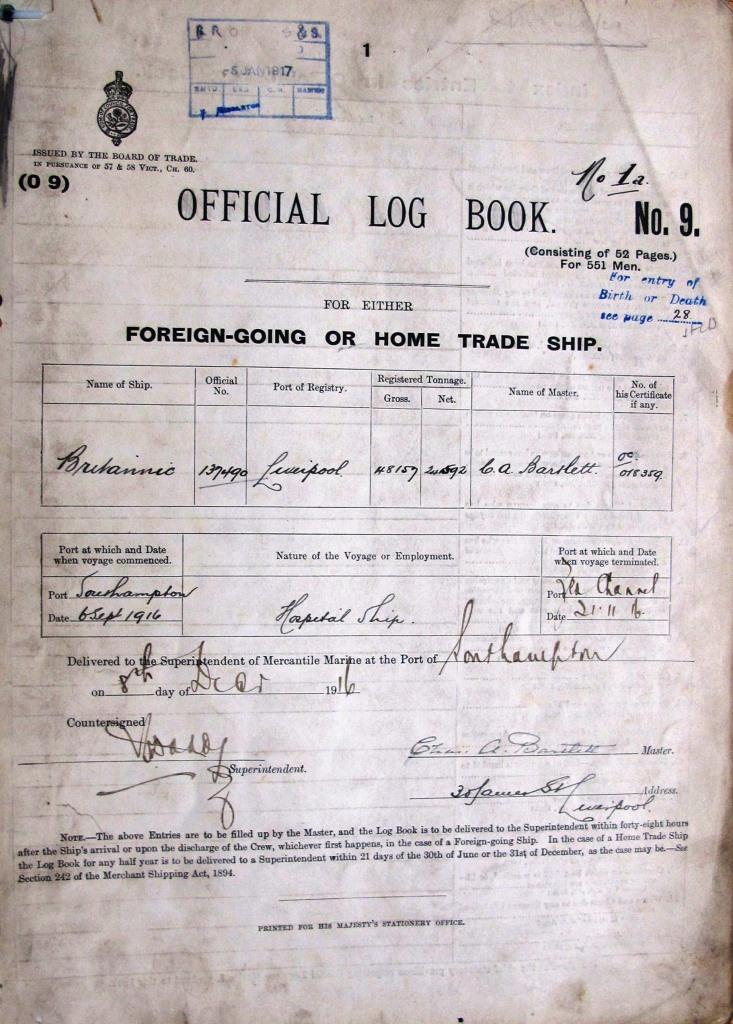 The logs do not show the patients, doctors, nurses and Royal Army Medical Corps (RAMC) staff who would have been on board, although on this particular voyage the vessel was on its way to pick up the sick and wounded, so the only patients would have been those picked up in ports on the way or those who had fallen ill during the voyage.

What the log does have, however, is a section for births, marriages and deaths on board. The section for deaths lists those killed or missing and presumed drowned when the ship sank, providing ages, capacities, nationalities and last pace of abode, if known. These include soldiers from the Royal Army Medical Corps. Of those listed, one was travelling under an assumed name, and one was discovered alive at sea and recovered after the remainder had been picked up.

One of three pages documenting the 30 people killed or missing when Britannic sank (catalogue reference: BT 165/1569)

The log ends with the poignant entry at ‘9.07 am on 21 November 1916 Zea Channel, 3 miles NW of port St. Nicolo Light House Britannic was sunk by an enemy torpedo or mine’ signed retrospectively by Charles A. Bartlett, master and G. Hume, Mate on 23 November 1916.

A list of the doctors and nurses on board, and the number of RAMC officers and men, for the previous voyage from Southampton to Mudros on 20 October 1916 may be found in a Ministry of Transport file MT 23/593 (paper T54469/1916). 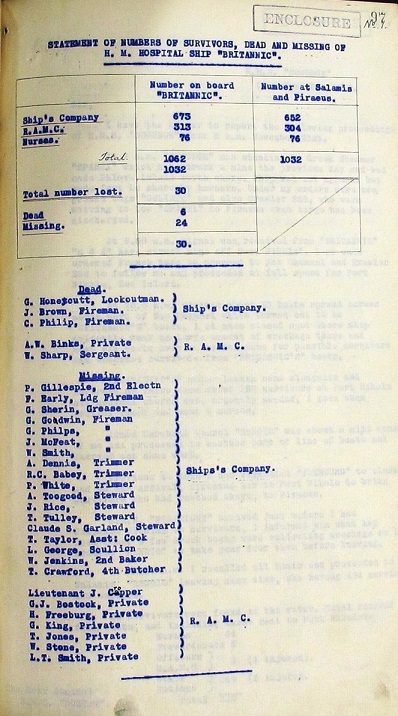 Statement of the number of survivors, dead and missing of Britannic (catalogue reference: ADM 137/1229)

But the most insightful document comes from the Admiralty Historical Section ADM 137/1229, within a file of records from the Eastern Mediterranean, used for compiling an official history of the First World War. This document details the ships that rescued the survivors, and gives the numbers of survivors picked up by the ships and where they were taken. The document also outlines the assistance provided by the French Consular Agent, Francis J. Lazarides and his assistant, to survivors who were temporarily landed at St. Nicolo on Zea (Kea) island, and by Lieutenant W. H. Rogers, the Port Control Officer at Piraeus, the principal port of Athens. The document also contains a statement of numbers of survivors, dead and missing, broken down into ships crew, RAMC and nurses, with a further list of the dead and missing.

The file also contains drawings of the affected area of the ship and a detailed report from the master, Charles A. Bartlett. Bartlett quotes two experienced hands who reported seeing the tracks of torpedoes and who were convinced that the ship had been targeted by a U-boat. Bartlett himself was uncertain and left the matter open. A Board of Trade shipping casualty return filled in by the master provides the following coda:

‘Vessel was steaming 20 Knots steering N48E magnetic; when a terrific muffled explosion occurred near no. 3 hold at 8.12 am. vessel began to fill rapidly and boats and rafts were promptly lowered and everyone left the ship, but some boats fouled propellers, and were wrecked, which probably accounted for loss of life. vessel totally lost. Crew and staff were picked up by vessels and some rowed ashore. The master wishes to add that the loss of the ship is total and is in the course of settlement with the admiralty. Vessel sank at 9.07 am.’ 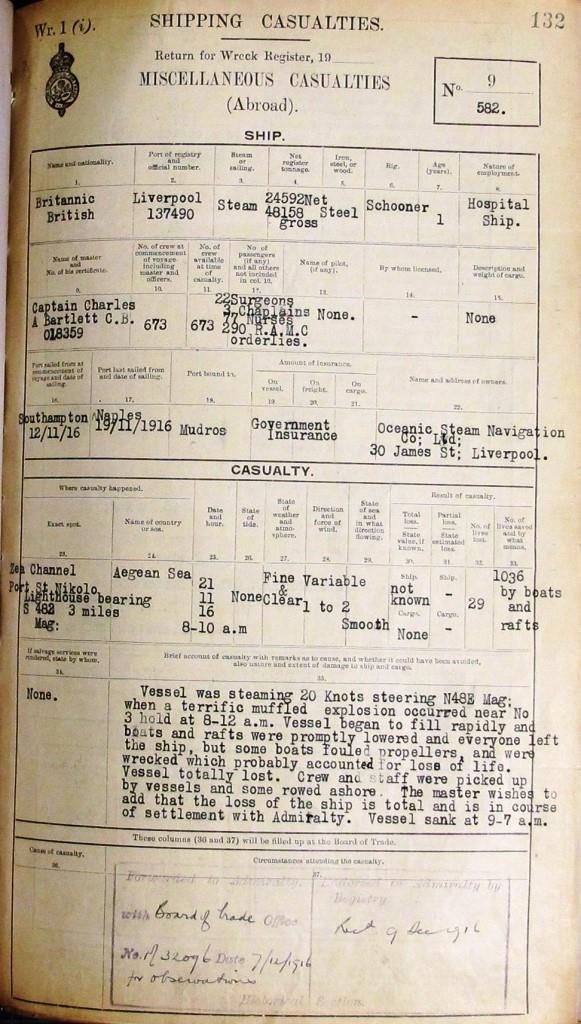 Official Board of Trade register of shipping casualties on Britannic (catalogue reference: ADM 137/1229)

Foreign office records detail official complaints made by the British and by the Red Cross, during the period of uncertainty as to whether the ship had been mined or torpedoed. The German Government countered with allegations regarding the carriage of troops and ammunition on hospital ships. They cited the statement of an Austrian Adalbert Franz Messany, aged 24, transported from Mudros on Britannic on its previous voyage, who claimed to have seen about 2,500 English soldiers wearing their ordinary uniform, being transferred on Britannic to active service elsewhere, who were not sick or wounded (in FO 372/1076 to FO 372/1078). He claimed to have spoken to two of the soldiers, and provided their names.

The soldiers were traced and denied his allegations, but the German Government was unconvinced by the arguments.

FO 372/1184 closes with a German Government comment on the absence of Britannic from the official list of ships removed from service, to which is appended the sardonic reply that HMG express regret at the failure to notify the German Government of the withdrawal of the ship after its sinking.