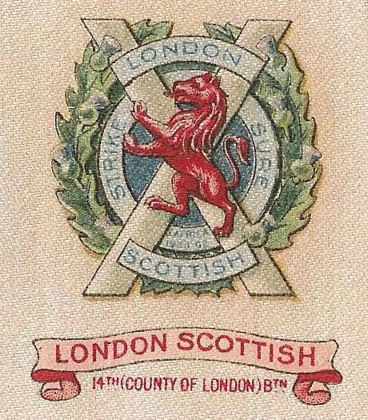 London Scottish silk badge, 1915. The badges were issued in cigarette packets. This one was issued by Godfrey Phillips Ltd in 1915 as part of the ‘British Army Light Infantry regiments’ series. Image courtesy of James Cronan.

It’s a line up that would make any film an instant Hollywood blockbuster. In the First World War four home-grown British actors, who would go on to grace stage and screen both in the UK and in America, enlisted in the 14th Battalion, London Regiment (also known as the 14th County of London Battalion and the London Scottish). Ronald Colman was the first to enlist, followed by Basil Rathbone, Claude Rains and Herbert Marshall. The simplest explanation for this is that the London Scottish had their regimental headquarters in the Horseferry Road in Westminster, central London. Their drill hall was at 56 Buckingham Gate, around the corner from Buckingham Palace, both within close proximity to London’s West End theatres.

During the course of the First World War, three line battalions of the London Scottish were formed. In September 1914 the 1/14th were sent to France. At Messines on 31 October 1914 the 1/14th became the first territorial infantry battalion to see action against the Germans.

The second line battalion, the 2/14th battalion, was raised in September 1914 and was posted overseas in June 1916, as part of the 60th Division. They saw action in France and Flanders, the Balkans, Salonika, Egypt and Palestine. In Palestine they assisted in the capture of Jerusalem before returning to France in July 1918.

A third line battalion, the 3/14th battalion, was formed in November 1914 and served at home as a reserve battalion, supplying troops to the two overseas battalions.

Colman enlisted as a Private, number 2148, in the 14th Battalion, London Regiment, on 5 August 1914. His service record, WO 364/5113, is available to download on the subscription website Ancestry. Colman had previously served with the London Scottish from 1909 for a period for four years. Prior to his enlistment in 1914 he had been working as a shipping clerk and appearing in amateur dramatic productions on stage. 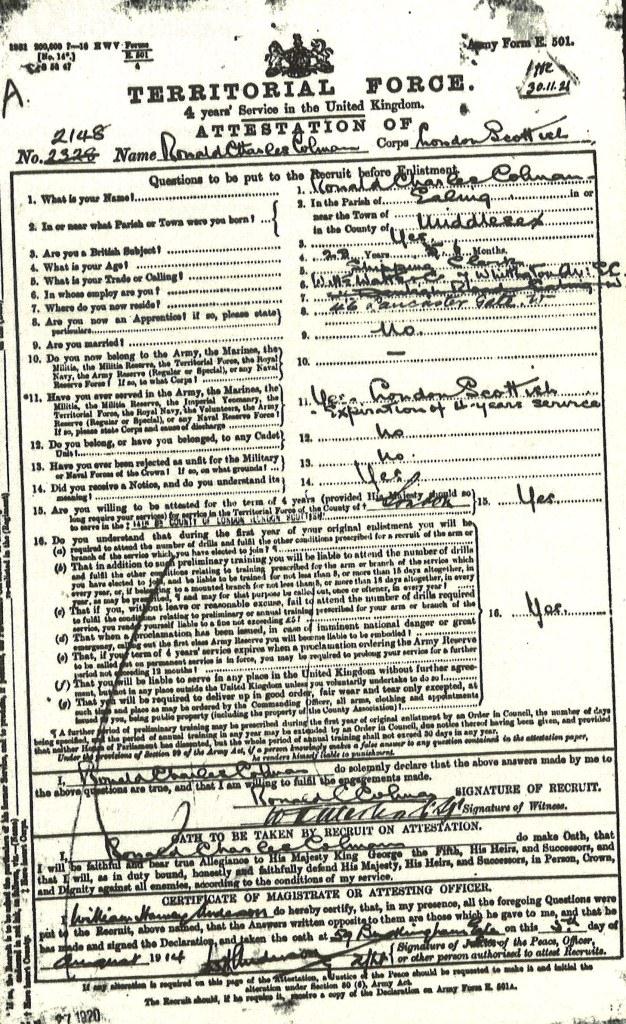 Colman was wounded on 31 October 1914. The war diary for his unit can be downloaded for a small fee from Discovery, our catalogue, at WO 95/1266. At 8.30 am on 30 October his unit were ordered to attack a windmill outside Messines. The attack left 11 officers and over 250 men of other ranks killed or wounded. Colman’s service record reveals that his injury was diagnosed as a severely sprained ankle. He was shipped back to England on 1 November 1914. On his medical notes Colman stated that he was in action near Ypres when he was thrown into the air by an exploding shell and injured his ankle on landing.
He was discharged as no longer physically fit for war service on 6 May 1915. He was granted a Silver War Badge on 12 June 1917 (awarded for those discharged due to sickness or wounds caused by war service) and a mark of distinction to his 1914 Star campaign medal. He also received the Victory and British War campaign medals WO 372/217810.

Following his discharge from the Army, Colman obtained work in repertory theatre before moving to America and a career in Hollywood. During a long film career he won an Oscar for best actor for his part as Anthony John in the 1948 film A Double Life, and was nominated for three other Academy Awards for Bulldog Drummond (1929), Condemned (1930) and Random Harvest (1942). Ronald Charles Colman died in 1958 and is buried in Santa Barbara, California. 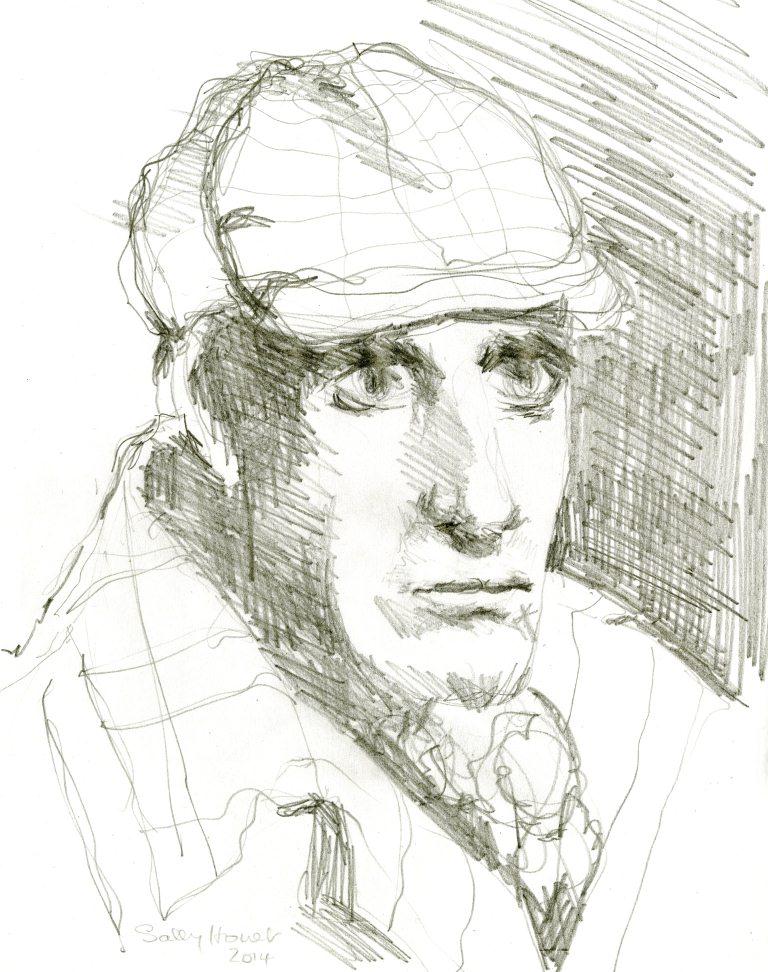 Philip St John Basil Rathbone, MC (1892-1967) was born in South Africa to British parents. His father Edgar, a mining engineer and mother Annie, a violinist, relocated to Britain in 1895. In the 1901 Census (RG 13) they can all be found, along with his younger siblings Beatrice and John, at 145 Goldhams Terrace, Hampstead. You can download census returns for a fee from our catalogue. Rathbone was educated at Repton School in Derbyshire. In the 1911 census (RG 14) he is listed as an insurance clerk, aged 18, born in Johannesburg, South Africa, but British subject by parentage.

On 13 November 1915 Rathbone enlisted in the 14th Battalion, London Regiment. His service papers are in WO 374/56295. Rathbone was aged 23 years 5 months and was living at 119 Delaware Mansions, Elgin Avenue, London. He gave his profession as ‘actor’ and his previous military experience as serving in the Officer Training Corps at Repton school. He was a tall, imposing man, standing at over 6 feet tall. His attestation form reveals that he married Ethel Marian Foreman in October 1914 and they had a son, Rodian Basil Rathbone, who was born in July 1915.

On 29 August 1916 Rathbone applied for a commission with the 10th Liverpool Regiment, a territorial force reserve battalion, which was authorised on 25 January 1917. His referee was Lionel Ford, headmaster of Harrow school and formerly of Repton school. In March 1917 Rathbone was diagnosed with measles but swiftly recovered. 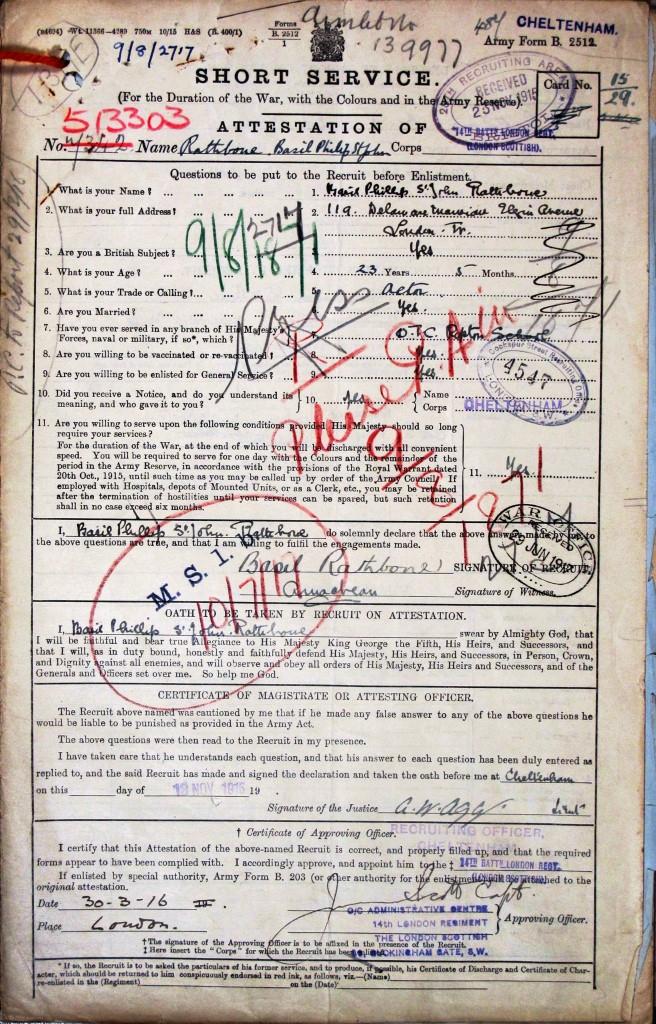 He served as an intelligence officer with the 10th Liverpools in France, attaining the rank of Captain. On 10 April 1918 he was recommended for the Military Cross for an action near Parvillers. The citation reads:

‘For conspicuous daring and resource on patrol. On one occasion, while inside the hostile wire, he came face to face with one of the enemy, whom he at once shot. This raised the alarm, and an intense fire was opened, but he crept through the entanglements with his three men and got safely back. The result of the patrolling was a through knowledge of the locality and strength of all enemy posts in the vicinity.’

After the war Rathbone joined the Royal Shakespeare Company, appearing in several of its productions, as well as other plays in London and Broadway. His film career began in 1925 and he appeared in over 70 films. He is best known for playing Sherlock Holmes alongside Nigel Bruce as Dr. Watson. In 1948 he won a Tony for Best Actor in a Broadway Performance for the role of Dr. Austin Sloper in The Heiress (1947). He has three stars on the Hollywood Walk of Fame, one for films, one for television and one for radio. Rathbone died in 1967 and is buried in Hartsdale, New York.

Watch out for the second part of this blog on the 14th Battalion, London Regiment, the London Scottish, featuring the service histories of Claude Rains and Herbert Marshall.