In the first part of this blog post we learnt that four well known actors had all joined the same battalion during the First World War (albeit at different times). Here we resume where the first part left off, taking in the service history and later careers of Claude Rains and Herbert Marshall.

William Claude Rains (1889-1967) was born in Camberwell to Frederick William Rains and Emily Eliza (née Cox). On the 1891 census they are living in Stockwell (RG 12/406 folio 40) and Frederick is described as an organ builder. By the 1901 census (RG 13/67 folio 32) they had moved to 96 Churchfield Mansions, Fulham, along with Claude’s younger sisters Violet and Maud. Rains attended All Saints School in Fulham. Frederick’s profession was superintendent to an insurance company. On the 1911 census (RG 14) the family were living at 36 Cowley Mansions, south west London. Frederick was described as a producer and stage manager of Moving Pictures, while Claude’s occupation was assistant manager, at the Haymarket Theatre. Rains married Isabel Esther Jeans in London on 27 March 1913.

Claude Rains enlisted in the 3/14th Battalion, London Regiment, on 17 February 1916. By this stage he had moved to Brixton Hill. Rains’ papers can be found in WO 339/108479. He was transferred to the 2/14th on 1 June 1916 and on 21 June 1916 he was posted to France. He was appointed Lance-Corporal on 18 July 1916 and promoted to Corporal on 4 November 1916. On 10 November 1916 he was caught in a gas attack near Ypres and was admitted to 20 General Hospital, Carniers the next day. The unit war diary for the 2/14th London Scottish for the period can be found in WO 95/3030/4. Rains was sent home to recuperate. The medical officer’s report noted that in Rains’ right eye he suffered from ‘hypermetropic polygmatism, long sighted – near vision cannot read anything. He uses left eye and suffers from headaches’.

On 10 May 1917 he was granted an officer’s commission in the 13th Battalion, Bedfordshire Regiment, a territorial unit based in Croydon. His referee was Thomas Peak, the headmaster of All Saints, who described him as a ‘very intelligent scholar’. Rains continued serving as Adjutant in the 13th Battalion, Bedfordshire Regiment, until February 1919. 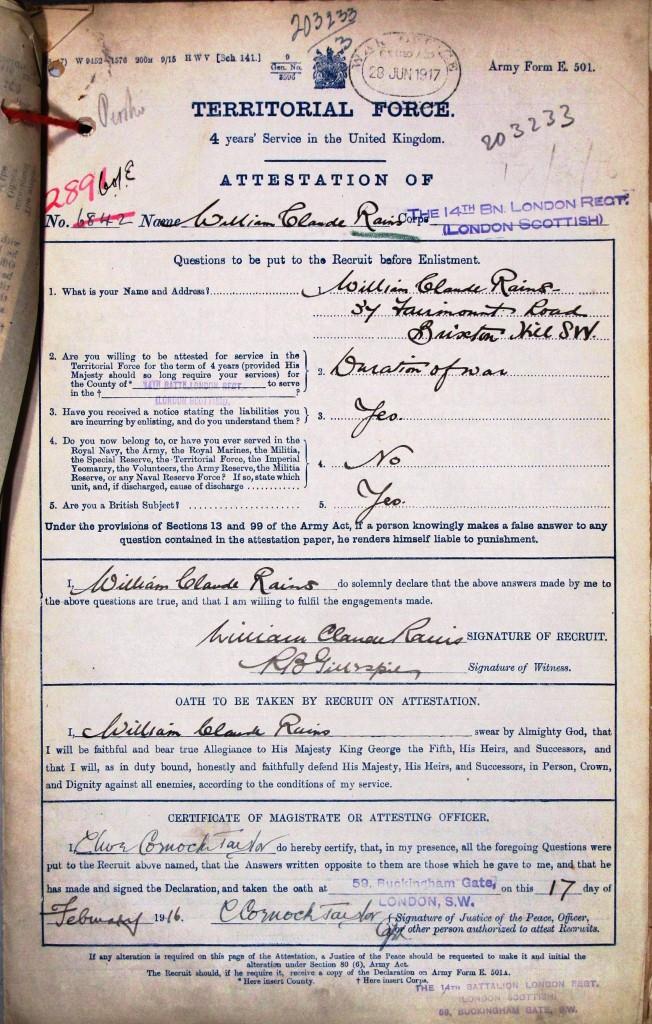 Rains’ big break in films came with the title role in The invisible man (1933). He was nominated for an Oscar for the part of the corrupt Senator Joseph Paine in Mr. Smith goes to Washington (1939) and played the part of the police officer Captain Renault in Casablanca (1942). He went on to star in many films in the 1950s and 1960s, including the British diplomat Mr Dryden of the Arab Bureau in Lawrence of Arabia (1962) and King Herod in The greatest story ever told (1965). Rains died in 1967 and is buried in Moultonborough, New Hampshire.

Herbert Brough Falcon Marshall (1890-1966) was born in London to stage actors Percy Marshall and Ethel May (née Turner). As a child his parents were frequently on tour. In the 1891 census (RG 12/2918 folio 82) his parents were staying in a boarding house at 48 Seymour Street. Liverpool. On the 1901 census they are all to be found living with Ethel’s mother, Marian Turner, who had recently been widowed. On the 1911 census Ethel and Percy were again on tour, staying at the Temperance Hotel, Oldham.

Herbert enlisted in the 14th Battalion, London Regiment, on 2 June 1916, aged 26, giving his occupation as ‘actor’. His address at the time was 56 Portland Road, Holland Park Avenue, London. His attestation forms in WO 364/5435 can be downloaded for a fee from Ancestry. His papers show that he married Hilda Lloyd Bosley in Kensington in August 1915. He was posted to France on 4 January 1917 and was severely wounded on 9 April 1917 at the Second Battle of Arras, receiving a gunshot wound to the knee. The unit war diary for the 1/14 London Regiment for this period is in WO 95/2956/1. He was admitted to hospital at Abbéville and was transported back to England on 1 May 1917.

On 17 May 1918 he was discharged from the Army as ‘no longer physically fit for war service’. Marshall’s right leg was amputated below the hip and he was fitted with a prosthetic leg, which caused him to walk with a slight limp for the rest of his acting career. He was awarded the Silver War badge as well as the British War Medal and Victory Medal. 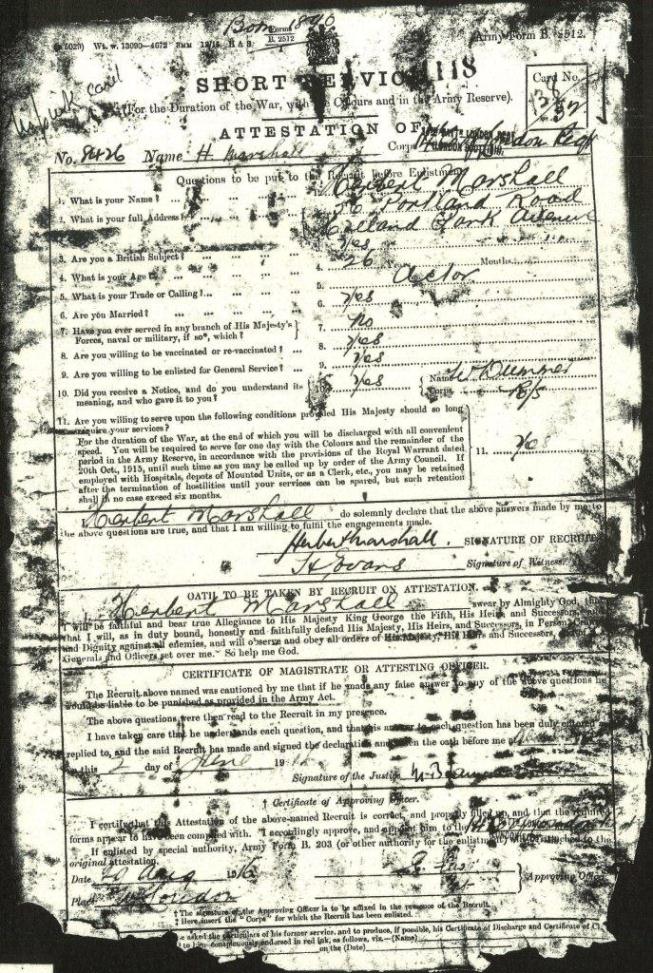 Marshall starred in many stage roles both in the UK and in America, including Charming people (1925-26) and There’s always Juliet (1932). In 1930 he starred in the Alfred Hitchcock film Murder! He went on to play leading roles opposite many of Hollywood’s greatest actresses including Marlene Dietrich, Greta Garbo, Joan Crawford and Bette Davis. As well as playing romantic leads he also played diverse characters in hit movies throughout the 1940s, 1950s and 1960s. During the Second World War Marshall visited numerous military hospitals, providing advice and hope to amputees. He continued to work sporadically in films until a few months before his death on 22 January 1966.

This blog would not have been possible without two major First World War cataloguing projects. Unit war diaries in the series WO 95 are being digitized and made downloadable from their catalogue descriptions on Discovery. We have digitised around 1.5 million pages of war diaries so far, and will be releasing them throughout this year as part of our First World War 100 programme. 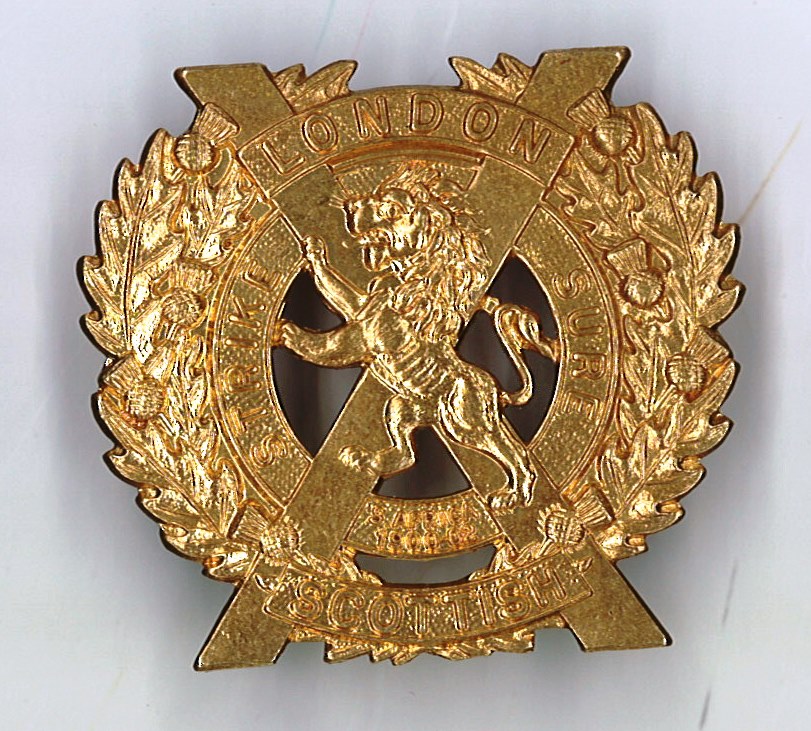 A recently completed project has seen improved descriptions for British Army Officers’ service records in the series WO 339 listing full names and regiments and making the papers of officers such as Claude Rains considerably easier to find. The next stage of the project is to improve the catalogue listing for Territorial Force officers in the series WO 374, which include the service papers for Basil Rathbone.