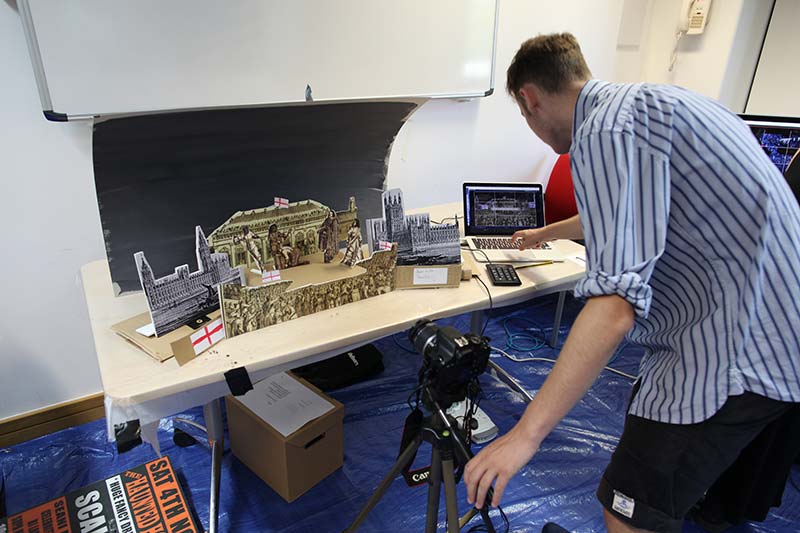 From the Domesday Book to the dark archive, the Tudors to the Titanic, and Victorian prisons to propaganda, ‘Holding History’ explores many moments in history.  This is the third instalment of a young person’s project run over the summer by the Education team, kindly funded by the Friends of The National Archives.  For five dynamic days in August, a group of 14 young people transformed our conference suite into a film studio: researching, story boarding, creating artwork, script writing, recording and filming. ‘Holding History’ is the result – a beautiful film based entirely on the group’s interpretation of documents in The National Archives’ collections.

We invited young people with an interest in history and film to apply online.  The 14 most accomplished responses were selected by the Education team and so the project began to take shape. The project was led by filmmaker Nigel Kellaway, with assistance from Kate Sullivan and Katia Potapova.

‘Holding History’ is our most ambitious film to date.  It captures ‘flash points’ from 1,000 years of history.  Before starting, the group were randomly allocated a flash point or theme which would be their scene in the film.  This selection of flash points and related documents had been curated by the Education team in preparation that had taken many months.  The overarching aim was to capture the wide range of material at The National Archives which reflects 1,000 years of British history.  The team was careful to include documents which left the young people able to develop their own historical interpretation of the records.  This was the driving force behind the project.

At an introductory day in July, the young people had the opportunity to tour the repositories, giving them a good understanding of the operation of the building.  They also explored a wide range of documents such as Princess Elizabeth’s Tide Letter (EXT 11/25), telegrams from the Titanic enquiry (MT 9/920/C) and the volume of hoax ‘Jack the Ripper’ letters (MEPO 3/142).  This gave the young people a taste of the unusual documents which represent ‘flash points’ in history.  After some paper-modelling activities, the group was beginning to consider how to translate historical documents into animated artwork.

The Education classroom had never been so full of such a huge range of material: over 80 individual documents were included in special workshops on day one of the project week.  The group spent the day looking through their selection and making a final decision on what would make the cut.  Indy decided to focus on the history of Chartism using the story of William Cuffey from TS 36/43 and CRIM 10/28 as a way of exploring the theme of suffrage.  Ruby worked with the original artwork from propaganda posters commissioned by the Ministry of Information, such as INF 3/229 ‘Keep Mum, she’s not so dumb!’ and INF 3/203 ‘Keep a lid on Hitler’.  Eliza looked at a range of documents from the 1980s, but decided to focus on the AIDS public health campaign in the mid-1980s.  She used PREM 19/1863 and T 632/33 to touch upon the background to the ‘Don’t die of ignorance’ public information film.  This was the first time that many of the students had handled archive documents – Tallulah said it was ‘really cool to see everyone with their documents and very engaging’.

The young people quickly grappled with the written material, and were straight into creating their artwork by Tuesday morning.  After storyboarding activities and modelling ideas, the Windrush ship, Jamaican maroons, and Thomas Fariner’s oven, among others, sprung into life.  Very quickly any free space on the tables and floor was covered in growing set pieces, paint, glue and drawings.

It was inspiring to see how the young people executed their visions, and how their confidence grew.  Nigel, Kate and Katia’s patience and dedication to achieving high-quality results ensured that the group’s buoyancy swelled.  The Education team were also put to work keeping up with the artistic demands of such a fabulous group of young people.  Something we kept hearing over the week was that the opportunity to be creative was relaxing, which Maisy said was ‘something [she] never [does] because of studying’. 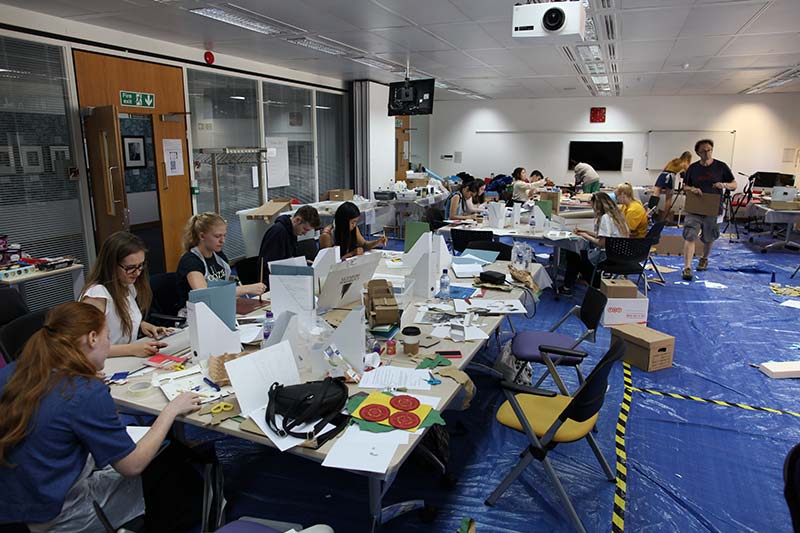 Filmmakers in the film studio

By the middle of the week, the film studio was buzzing with creative energy which kept motivation high.  Many of the young people were arriving early and staying late to ensure that they were able to complete their scenes.  As well as creating scenery and using animation technology, the group[ also had to script and record voice-overs for their scenes.  This was another opportunity for them to convey their own interpretation of the documents and to emphasise their own style of filmmaking.  Many of the group commented that the patience required for stop-motion filmmaking was challenging, but as Yasmin commented ‘watching the footage back made it all worth it’.

Challenging, tiring, fun, creative, sociable, tranquil and engaging are just some of the words which the group have used to describe their week.

I will leave it to Hayerin and Jenny to explain why opportunities like this are so vital and rewarding:

I think learning about preservation and discovering history for ourselves is really fulfilling.

I think it’s really important to give young people a chance to understand the archives and what they do.