Home > Blog > My Tommy’s war: a history through photos

My Tommy’s war: a history through photos 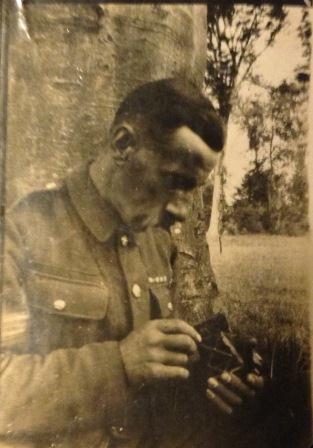 Alfred Avis, with a camera. Image courtesy of Linda Stewart.

I  knew very little about my grandfather: Alfred Thomas Avis, 1884 -1936. When the My Tommy’s war blog series started, I doubted that I would have a Tommy to write about. All I had were two photographs of him in military uniform inherited from my mother, I knew nothing about his war service. The golden rule of family history is: ‘ask surviving relatives’. We actually got quite a long way with the Avis line: back in the sixteenth century they were still in the same village in the Weald of Sussex, mostly as carpenters. With such a French name it seems quite likely to me that the Avis’s landed at Pevensey with William the Conqueror and stayed on in Sussex (I have  fruitlessly scanned the Bayeux Tapestry for any passing family resemblance – maybe someone carrying a chisel…).

Such wild speculation aside,  I realised I knew almost as much about the sixteenth century Avis’s as I did about my own grandfather, perhaps because the distant past is sometimes easier to deal with than living memory. My mother told me that when she was three (which would have been in August 1914) the family split. At the age of 29 her father left his wife and eldest daughter in Sussex, breaking with the centuries old tradition of Wealden woodworking, ending up in south London with his son and younger daughter, (my mother) and his common law wife.

My mother said they house-sat for gentlefolk who had fled London for the duration of the war. They also moved around a lot, my mother always bewailed having gone to nine different schools – was this because my grandfather didn’t want to be traced? My mother also remembers being told in the early 1920s that her real surname was Avis – so it looked as though the family went through the war under another name. And I don’t know what that was, so how was I ever going to find my Tommy – joining some unknown regiment, from some unknown south London address, possibly under an unknown assumed name? 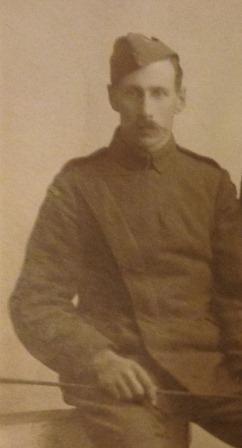 What information did I already have? (The second golden rule of research). He was a carpenter, so, skilled with his hands (unlike his granddaughter). He used to make crystal radio sets using cats’ whiskers which my mother remembered listening to by sitting very still with headphones on. And in this photograph he is tinkering with a camera: his war service was most likely in some sort of mechanical role. What else could I learn from the picture? Two stripes – so a  corporal? There’s no discernible insignia – I tried enlarging the tunic buttons, but it’s impossible to make out the badges. I turned to the second picture; a different, rather plain uniform, which on the face of it had less information to convey.  (People who know about First World War uniforms will be ahead of me here). On the shoulder I could just make out an NG? Part of ENG – short for engineer? That would support the mechanical theory.

I searched the Royal Engineers. In vain. And every tranche of Army records as they became searchable. But never finding my Alfred Avis. I began to look online at images of army uniforms to see if I could find anything that resembled either of these pictures. And I soon realised, oh joy of the internet, that the uniform was the Royal Flying Corps.  An image with just the minimum of metadata, such as ‘RFC uniform’ , can sometimes be more enlightening than a whole box of files. No wonder I couldn’t find him in the Army – third golden rule: never make assumptions. One Monday shortly after this breakthrough, some new cataloguing of AIR 79 was announced on our staff intranet. I typed in his name and suddenly, there he was. I couldn’t wait to look at the record, but even staff aren’t able to order documents on a Monday. Eventually, on a Tuesday lunchtime, I opened AIR 79/957/106584. Was this really going to be my Tommy? Knowing so little about him, were there going to be any recognisable details that I could tie to him? I’d turned up other Alfred Avis’s before, when I was searching the Army. 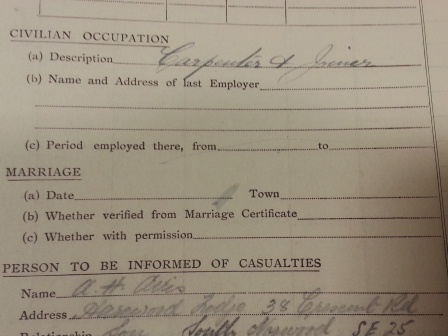 Birth date 1884 – check, south London – check, carpenter and joiner – check. I couldn’t resist giving a little squeak, breaking hallowed silence of the staff reading room. I had found my Tommy at last. After a few emotional moments, my love of analysing datasets kicked in. Just what were these records and what could they tell us? Quite a lot: lists of postings and promotions, medical and fitness details, relatives names and addresses.  And AIR 79, whilst being a record compiled for purely military processes, also highlights the social disruption of the war.

The address I saw, Harewood Lodge would appear to corroborate the house sitting for the gentry story. Crescent Road, since renamed – I found it through the A-Z of Edwardian London – is full of rather grand houses, most of them now flats. And as so often with records, it’s what they don’t say that can be the most revealing. My grandfather, although still married, did not supply any marriage details – the coming of the First World War had effectively ended that marriage in an age when ordinary people did not divorce, providing a means of escape and starting afresh. Nor does he mention his common law wife – his ‘person to be informed’ is A H Avis, whom I released was my uncle Alfred: a 12 year old boy. It seems that things had gone so wrong with the world that you would give your 12 year old son the responsibility of being told if you had been wounded or killed. 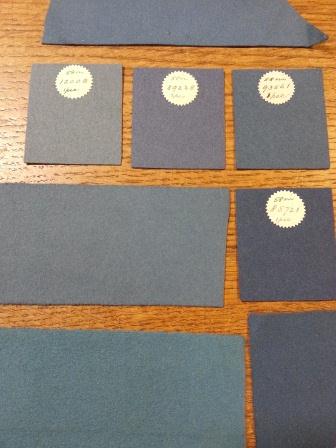 My grandfather served from 1916 to 192o, as an air mechanic, some of it in France with the British Expeditionary Force, presumably maintaining the aircraft which were made largely of wood. The First World War pilots’ manual describes a plane as  ‘a highly polished beautifully finished piece of wood’. And presumably picking up something of the new technological developments that flying required. Planes were effectively the first search engines, seeking out information from the landscapes  they flew over: better cameras were needed to capture and present the changes in activity on the ground picked up from the air, and better radios were needed for communicating at the new speed of flight.

As it was the distinctive RFC uniform that set me on the right track, I couldn’t resist researching a bit more about it. There are some files in AIR 2/3  devoted to it – the King himself took an interest. Why, as the battle of the Somme was raging, were the top brass exercising themselves with uniforms? Some of it was practical, the need for pilots to have windproof and oil proof clothing, and some of it was to do with forming a new identity, for a service that belonged to the air, and was going to be the colour of the sky. We still have some of the swatches on file. Sadly I only have my Alfred Avis in sepia; two visual records, that eventually led me to find my Tommy and a bit about his war.