I had a sketchy knowledge of the period relating to the Jacobites and had never studied them as part of my history degree. This all changed when I found out about The National Archives’ cataloguing project headed by Dr. Katy Mair. When I saw some of the material that was being uncovered from the State Papers of George I (SP 35) and George II (SP 36) by a dedicated team of volunteer cataloguers, it drew me in immediately, helped by the fact that the documents for the most part were so readable in their original state!

I immediately thought that it would be brilliant for schools to have access to some of the documents. After all, where do you find Jacobite source material for the classroom in a hurry when you need it? So the idea for our two themed online document collections, relating to the period of the Jacobite risings of 1715 and 1745 for The National Archives education pages, was born. 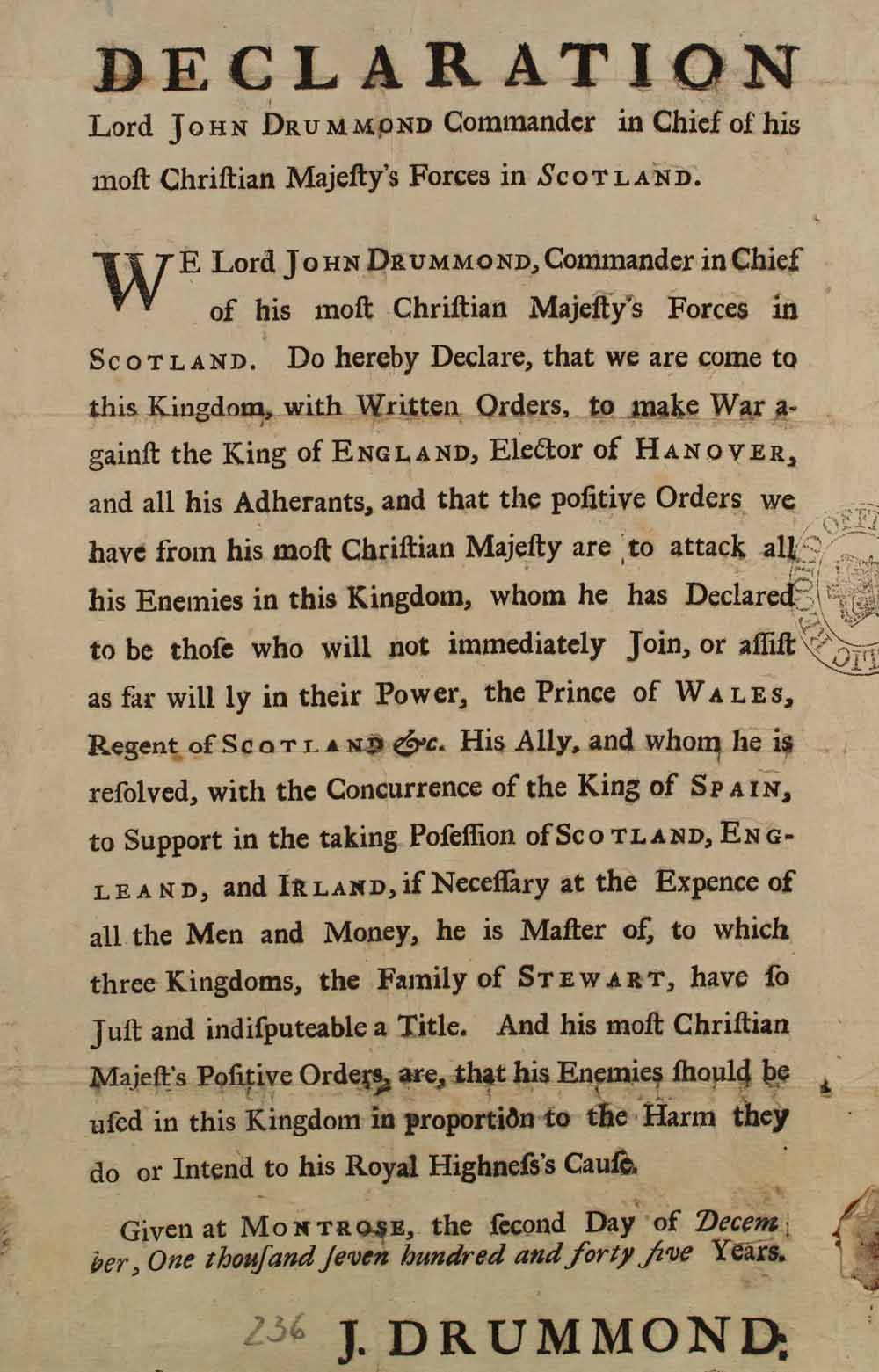 Once I started looking of course, I found that Jacobitism was about so much more than the events around 1715 and 1745. The human stories that have emerged have been fascinating. For example, the collections have revealed some letters from Jacobite soldiers to their wives. John Fraser writes ‘my Dear soul take special care of the few moveables & especially the horse and I am hopeful that Alexander Grant will [do] for me as I will [do] for him If I was there & he heare [here] We are gowing [going] forward to Ingland [England] which the Regiment [don’t] like.’ (SP 54/26/381)

Again there are no shortage of court cases against those making clandestine toasts to the king across the water’. One man, for example, ‘wearing the Parchboard crown upon his Hat, and that Abraham Burton drank the Pretender’s health in the Belfry [bell tower] of Ashford Church upon his knees’ (SP 44/79A f.162-3). Many Jacobite drinking glasses survive today and are engraved with secret symbols, such as the oak leaf, white rose and butterfly. You can see an example on our website from the West Highland Museum.

Also small details about ordinary soldiers’ lives abound. From intelligence about the Jacobite army received from Penrith (SP 36/73/3/f7) we discover that ‘they march with Droves both of Black Cattle and Sheep 3 wagons of Biscuit and Cheese, which they sit down at noon to eat; At night and morning they get a little oatmeal, & carry it in a leather Bag at their side, as their only subsistence. Everyone has a sword & targett [small round shield], Gun & Durk [long straight-bladed dagger].’

Some of the documents also give us a sense of the landscape and even the weather. Francis Philipson writing in a tax office in Edinburgh says ‘according to an old proverb we have 9 months winter and 3 cold weather’ (SP 54/3/31). For the soldiers, fighting in Scotland was hard, looking for ‘firing and forage’ was a constant problem often referred to by the Duke of Argyll when sending his reports to the Secretary of State.

Through these collections we hear the voices of some of the key characters via their correspondence, namely the Earl of Mar, James Francis Edward Stuart (‘The Old Pretender’), Charles Edward Stuart, (‘Young Pretender’ or Bonnie Prince Charlie), George I, Flora MacDonald, and the Duke of Cumberland. Here is an extract from Flora MacDonald’s statement on the escape of Charles Edward Stuart from South Uist (Outer Hebrides) to Skye, 12 July 1746. She gives details on how his escape was managed, his disguise and where he stayed (SP 54/32 f.49E). 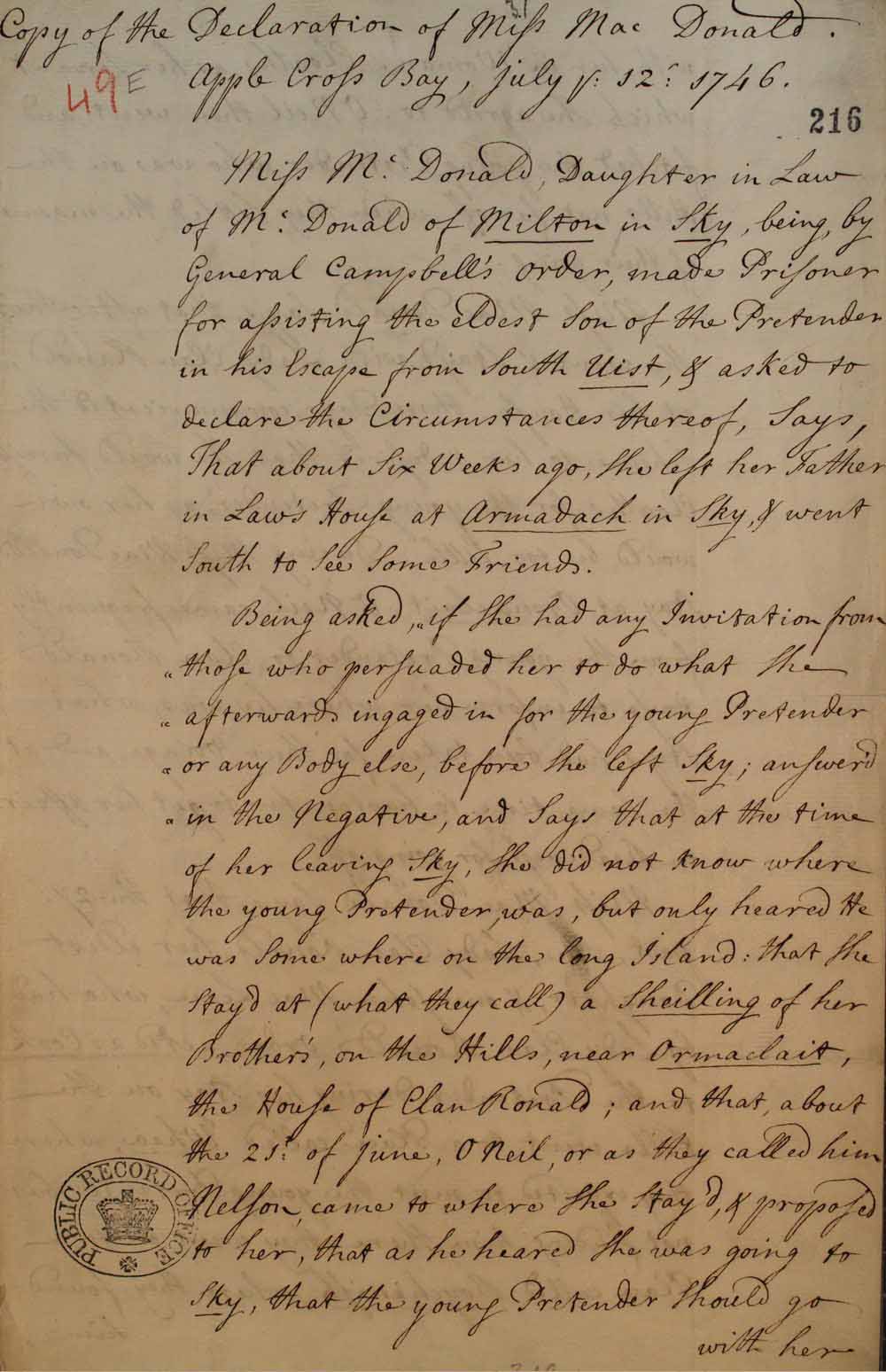 Jacobite propaganda also features heavily so we have included an extract from a 43 verse song in the Jacobite Rising 1715: Rebels with a cause? which certainly does not mince its words when calling for the return to the throne of the ‘Old Pretender’ and an end to rule by George I, House of Hanover (SP35/40 f.179). It reads: ‘No more shall foreign scum pollute our Throne; No longer under such. We’ll blush & groan; But Englishmen an English King will own’.

Documents which reflect the treatment of the rebels by the British government in aftermath of the rebellions have also been digitised for these two new online collections. For example there are orders on behalf of George I and George II for the authorities to draw lots to decide which prisoners were to face trial as so many prisoners taken were after both risings. In our themed collection on the Jacobite Rising 1745: A serious threat to the Hanoverians? we include extracts from a sketch of regulations proposed to be made in Scotland, dated 28th June, 1746 which proposed controlling the wearing of plaid or tartan. ‘The abolishing the Habit after a proper time, will be of infinite use but should they pretend that this mountainous country requires their Habit (which I am not at all convinced of) then the use of Tartan or Plaid should be particularly forbid, as it is what makes their uniform’ (SP 54/32/24).

So, if you want to explore a range of primary sources on this period of history, take a look at our two new online collections of over seventy documents. I, for one, am delighted that the Jacobites appear in the Key Stage 3 history curriculum and can be studied as part the A level history syllabi across all the exam boards.