Higgs Boson: the Big Data challenge could have happened in Mundford 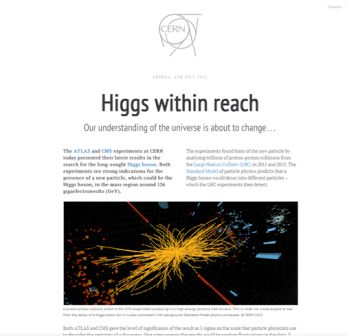 Searching for the Higgs Boson is not just a case of shooting particles around that collide somewhere under Switzerland (a lay person’s grasp of particle physics), CERN has to collect, analyse and manage all of the data this generates.

Big Data is a big thing just now. In the wake of the Government’s Open Data White Paper, Government departments have just published their Data Strategies, including their plans for Big Data – defined as: ‘data which is routinely collected and held by a department as part of its everyday activities’.

Managing and extracting value from very large and complex datasets is a challenge. The head of CERN openlab, Bob Jones, outlined for the Cloud Computing World Forum the magnitude of the data CERN created as part of its everyday activities: ‘The organisation’s existing European data centres currently manage up to 15 petabytes of data a year over 100,000 CPUs, but that only represents 20% of the total data generated by its Large Hadron Collider (LHC) accelerator. In reality, the LHC’s four major experiments…generate around a petabyte of raw data per second but only about one percent of that is stored’ (reported in Computerworld).

The National Archives’ own digital tape library can accommodate up to two petabytes of digital information. We were all suitably awestruck at the hugeness of our tape library – big enough to fill four million filing cabinets of paper documents. But only two seconds’ worth of raw data from the Large Hadron Collider…

Fortunately CERN has its own archive, and has its data under control, not least because 30 years ago Sir Tim Berners-Lee came up with an idea for managing it: 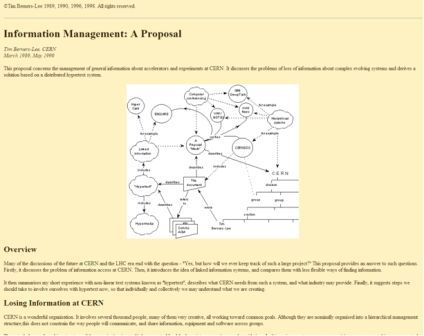 As some news organisations have pointed out in these heady times of celebrating the confirmation of the Higgs Boson, (or something very like it, or maybe not it all but something equally momentous), the other great achievement to come out of CERN was the invention of the World Wide Web.

Other than a wide ranging collection of the UK Government’s use of Sir Tim Berners-Lee’s invention in the UK Government Web Archive, I wondered, on my way to work the other day, as the news broke about the Higgs Boson, what else we might have relating to CERN in the archives. The UK was after all one of the founding nations of the European Organization for Nuclear Research (CERN is its French Acronym: Conseil Européen pour la Recherche Nucléaire). If you pop ‘CERN’ into our Discovery search box, (I did this from my BlackBerry on  the train) the list of records it returns quickly gives you a feel for the Cold War world of atomic energy in the 1950s and 60s: atomic energy and disarmament; civilian uses of atomic energy; should the USSR be allowed to join? The participating government departments were, as you might expect: Cabinet Office, Foreign Office, The Science and Engineering Research Council, UK Atomic Energy Authority, Housing and Local Government… Housing and Local Government? The file titles on my BlackBerry screen were tantalising:

‘Proposal to offer a site in Mundford, Norfolk for a large proton accelerator’

They were going to build a particle accelerator, here? A thing that shoots particles around under East Anglia? I couldn’t wait to get into the office and order up the records.

Indeed, it was a highly developed proposal. The particle accelerator at CERN wasn’t big enough, and member countries were invited to propose alternative sites. The details are in EW 13/20.

The proposed site at Mundford FT 3/690

This was in the era of the Wilson Government’s white heat of technology, although the Macmillan Government had already looked at the costs of  High Energy Physics, and the possibility of a collaboration with the USA: 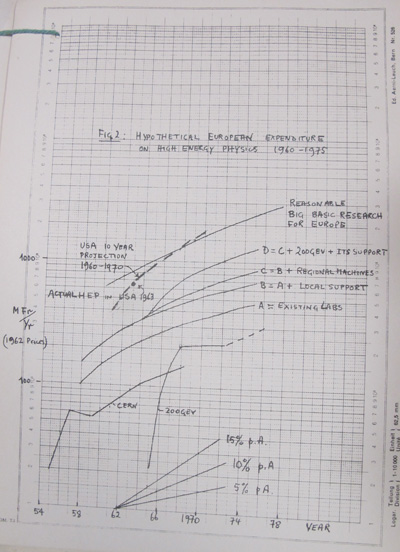 CERN required applicants to fill in a very detailed questionnaire about the facilities in the neighbourhood; the answers given not only reflect the attitude of the times towards education and employment, they also offer a snapshot of East Anglian society of interest to the future local historian.

However, when the British Geological Survey investigated the site, the water table was higher than expected; this could be fixed, albeit with expensive pumping equipment, and the government remained optimistic, believing  that CERN would not rule it out because  no site was likely to be perfect. There were environmental objections from the Nature Conservancy Council – we have their file, too: FT 3/690, nonetheless the application process to build ‘the Atom Smasher’ at Mundford continued.

Then in 1968 the economy took a downturn… it seemed the UK would pull out altogether, not only from the site but maybe from CERN itself.

The story is continued two years later in a Foreign and Commonwealth office file,  FCO 55/564, in the context of a change of government and Britain’s’ entry into the Common Market (as the EU was back then). CERN had come up with a cheaper option building on the existing accelerator ring. The Minister for Education and Science, Margaret Thatcher, went to CERN to have at look at particles colliding and announced to the House of Commons the UK’s continued support.

A cutting from the Eastern Daily Press in EW 13/20 argued the case for the Mundford Accelerator, quoting the Government’s senior scientific advisors:

‘No one in the eighteenth century had any intimation of the electrical industry, in the nineteenth of an atomic energy industry and certainly there will be fields of practice in the twenty-first century of which we in the twentieth know nothing, but the foundation of which will be laid.’

Who knows what big data may yield? The exciting thing is: nobody does.