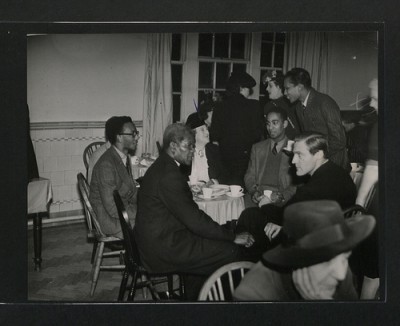 Illustrating the simplicity of a chat over a cuppa - CO 1069, London, 1945: Opening of the Victoria League Colonial Students, Hostel, Nutford House, Nutford Place. Visitors having tea with students after the opening ceremony.

I feel very lucky to work in internal communications at The National Archives because I get to learn about the diverse histories our records hold from the ‘inside’, some of which can help highlight or inspire debate about present day matters and issues. I also get to publicise events such as Diversity Week to staff, which I very much enjoy. Diversity Week is our annual event that includes free public talks which aim to highlight the diversity of our collections, while bringing greater awareness and understanding of equality and diversity issues.

Mental health is a topic that appears frequently in our records, and changing attitudes to conditions over time are reflected in provision for treatment, the language used to describe aspects of mental health, and the willingness of people to discuss it. More information on researching these areas can be found in our research guide.

This year’s Diversity Week explored the topic of mental health by way of an interactive and thought-provoking talk presented by Jon Bartlett, for our staff. Jon has lived with bipolar (previously known as manic depression) for 20 years and has tried numerous ways of coping. Last January, he published a blog anonymously. Because of the level of support he received, he decided to go public. Since then, he has published further blog posts.

Sadly, if a person suspects they have a mental health condition, they may be too afraid to seek help, or even mention it to someone. Despite having access to more knowledge and information than ever before, it’s still something 21st century people often avoid talking about out of embarrassment, shame, or fear. Various support is available online, but it is often scattergun, or difficult to digest.

It is estimated that one in four people will experience some form of mental health condition throughout their lives. That’s at least one person in the crowd out of those you race to win that last spare seat on the rush hour tube. It’s possible you may know someone who is living with a mental health condition. Anyone, from all walks of life, can go through a tough time.

Jon’s talk was both dynamic and entertaining, without ever losing its key message: let’s just talk to each other once in a while, and see how you’re getting on. You don’t need to be a psychiatrist. But that cup of tea (or coffee – my one true love) and a chat could make even the smallest of differences for someone living with a mental health condition.

Afterwards, I had a chance to speak to him. “I think, for me, mental health really is the last taboo. It’s really exciting for me to be at The National Archives as part of this week. I’ve now trained 50 or 60 staff in some sort of mental health awareness. We still have a lag on the uptake of these things and an unwillingness to speak about conditions. We need to reflect those experiences in our lives.” Jon’s willingness to talk openly about his own experiences, and about a subject so often stereotyped or misunderstood, is what Diversity Week is all about.

If I’ve learned anything from it, it’s that it’s time to make mental health issues less taboo and more, ‘Hey, this is a part of life.’