When I tell people that I work at The National Archives they tend to automatically assume that I work with dusty paper records. It is sometimes quite a struggle to explain that I deal with archiving websites and rarely enter the repositories they have seen featured in TV history programmes. Other posts in this blog have explained that The National Archives preserves a diverse range of records which are not all paper based. We hold such things as a glove, a leather case and of course a wide range of digital records including a perhaps surprising number of video games.

My earlier post noted that UK Government began using the internet to communicate with citizens in the mid 1990s. As web technology developed and more people began to use the internet, government organisations started to develop different types of content aimed at particular sections of the population. This included the development of several video games which were hosted on government websites. In some cases we have been able to capture the games and add them to the web archive.

Many of these games were aimed at children, such as the games on the Hedgehog family website, which we archived in November 2008. The Hedgehog family was a Department of Transport initiative which aimed to educate children about road safety. A variety of different types of media were used. The Hedgehog family was replaced by a new initiative called Tales of the Road in November 2008 and the website was removed from the live web. We are pleased that this example of how government used technology to communicate with children has been captured for long term preservation. 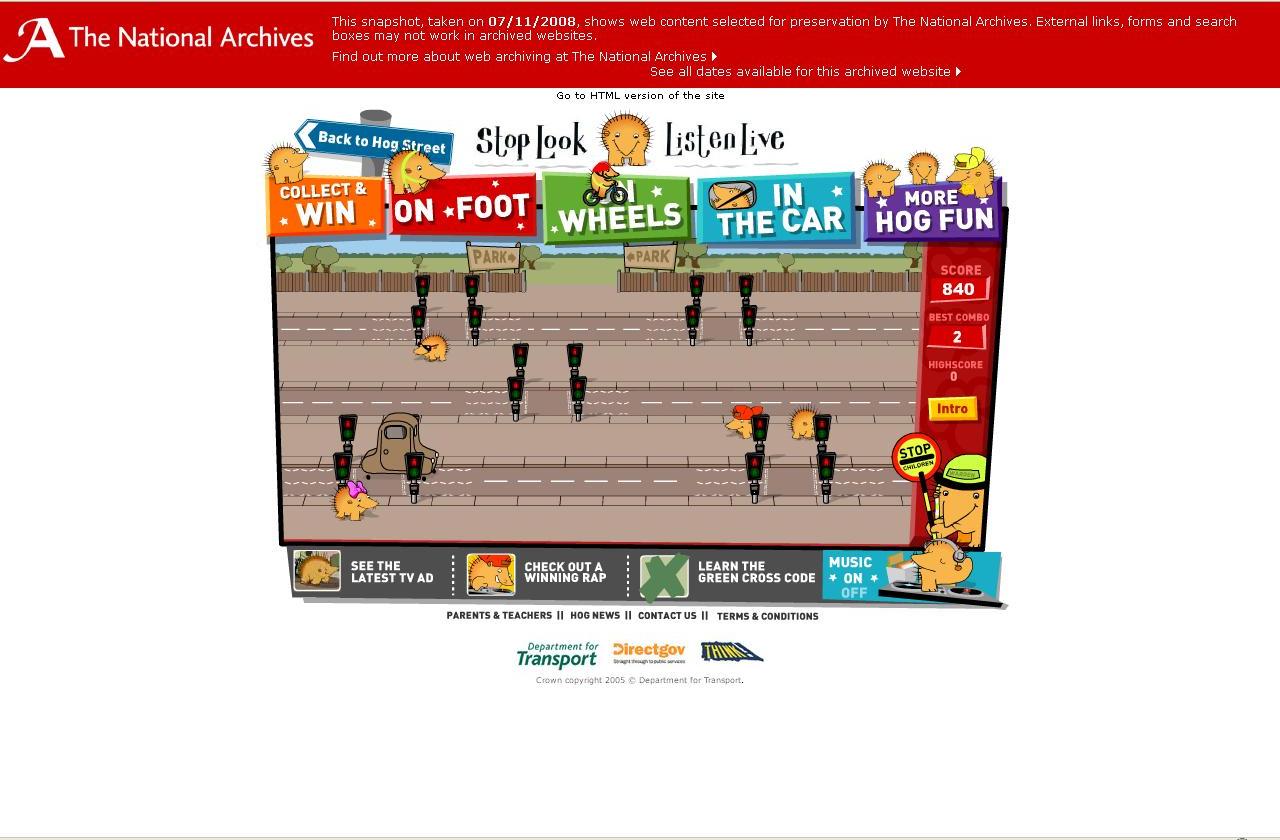 Some of the other games we have captured are aimed at other sections of the population. This includes the Patent Pit game which we archived as part of the website of the Intellectual Property Office. The Patent Pit uses a ‘Dragons Den’ type quiz in an effort to teach users about the complex subject of patents.

As my colleague Tom Storrar explained we capture websites by remote crawling. It is often difficult to capture complex content such as games as part of the automated crawling process. Most of the games we have captured are built in the Flash multimedia platform. We cannot usually capture this content automatically but the skilful crawl engineering team of our contractors the Internet Memory Foundation are able to manually capture each file and add it to our archive. Once all the files have been added the game should run in the same way it did on the live site. The game will then be preserved with the rest of the website and will be accessible through standard web browsers for as long at they are configured to display Flash content. The web archiving and wider digital preservation communities are working to establish the best ways to display content which is no longer supported by current web browsers.

Video games have been part of everyday life in this country for the last three decades. A report published by the Department for Children, Schools and Families in 2008 stated that two thirds of children aged 5-16 owned a video games console. In 2011 I was lucky enough to attend a talk given by the National Video Game Archive. They explained that as the video games industry is generally keen to develop and use new technology, preserving the past is sometimes not viewed as very important. We are pleased that we have been able to capture a small number of games for long term preservation. As well as providing interesting information about the way government communicated with citizens, they also offer an interesting insight into what people enjoyed doing in the early 21st century and how games were designed.

In the coming months I will be putting together a themed collection of video games in the web archive for our web pages. If anyone has any favourites they would like me to add, please let me know via the comments below. 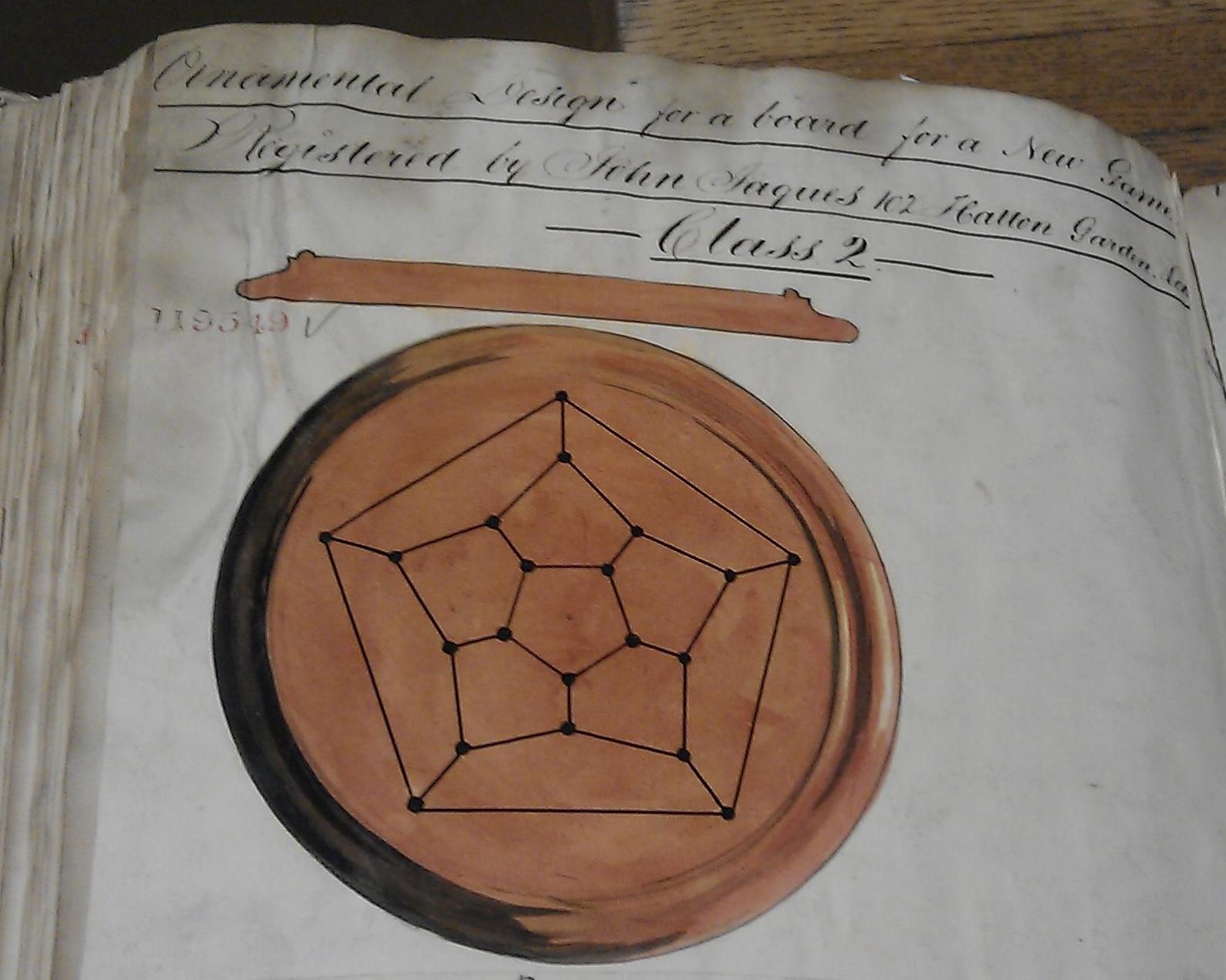 Afterword – When I was writing this post I decided to try and find out whether The National Archives held any other types of games. I was unable to find any physical games but colleagues in our Advice and Records Knowledge helped me track down this beautiful image of a new design for a gaming board registered in 1859 which forms part of the Records of the Patent Office.

If you are aware of any actual physical games which form part of our holdings please let me know as I’d love to see them.