The hearth tax was intended as a permanent levy to supplement traditional taxes, to provide King Charles II and his successors with a reliable source of income. It was also known as ‘chimney money’, and was a twice-yearly charge of one shilling on every fireplace, hearth and stove in each dwelling in England and Wales, payable at Michaelmas (29 September) and Lady Day (25 March).

It became law in May 1662 and the first installment due was for the half year ended Michaelmas 1662. The tax was paid by the occupier of the house, not the landlord. It was resented, because after July 1663 the local constable was empowered to enter houses to verify the numbers of hearths. The law was abolished on William and Mary’s accession and replaced with the window tax.

Certain exemptions were allowed for:

Because initial receipts were disappointing, by an Act of July 1663 parish constables were instructed to record both ‘chargeable’ and ‘not chargeable’ heads of households, so that both payers and exempt were listed on the returns. Another Act of 1664 ensured that, from Michaelmas 1664, landlords of exempt occupiers were liable to pay the tax, as was anyone with more than two hearths.

Value of the returns

When a hearth tax return is complete for any place, it provides an excellent list of heads of households and the number of hearths in their dwellings.  The returns give the best overview of the country prior to the 1841 census, and are indispensable to local, economic and family historians. Many returns have been published. But a word of warning: the very poorest people (those receiving alms, or weekly parish relief) may not have been included in some lists of exemptions, although they should have been.

Returns exist in The National Archives, but only for the periods when the returns had to be audited in the Exchequer: Michaelmas 1662 to Lady Day 1666, and Michaelmas 1669 to Lady Day 1674. At other times the tax was farmed out or put in commission, and those records do not survive. The returns at The National Archives are in series E 179, and consist of lists of names enrolled on parchment by clerks in the counties, complemented by exemption certificates drawn up by parish officials.

The National Archives’ records for each county would ideally consist of nine complete returns, but this is almost never the case. Some counties are well represented, some poorly. One reason for this was negligent storage, particularly in the period 1822–1833. During one of the frequent moves of documents, ‘large quantities of parchment were purloined by the labourers employed and sold to glue manufacturers’.

Each certificate represents a parish and was drawn up by the overseers of the poor, churchwardens and minister of the parish. Printed ‘pro forma’ certificates were introduced in 1670, and measure 30.5 cm long by 19.5 cm wide. They recite the statutory provisions for exemption, and when the names of the exempt had been added they were signed by the minister, churchwardens and overseers. The completed certificates were then submitted to two justices of the peace for signature. 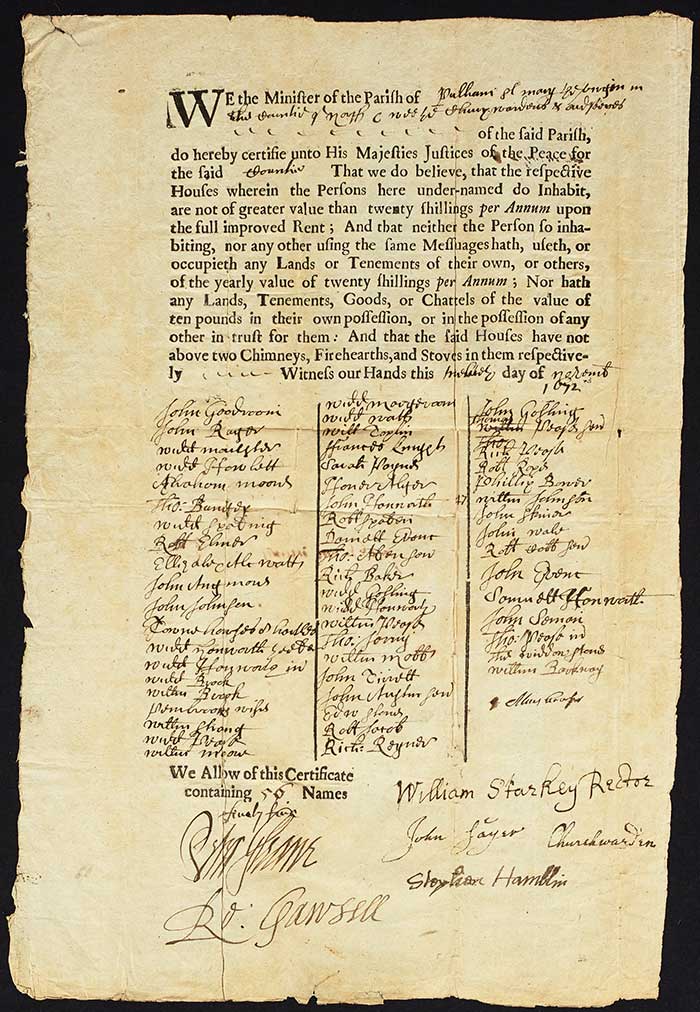 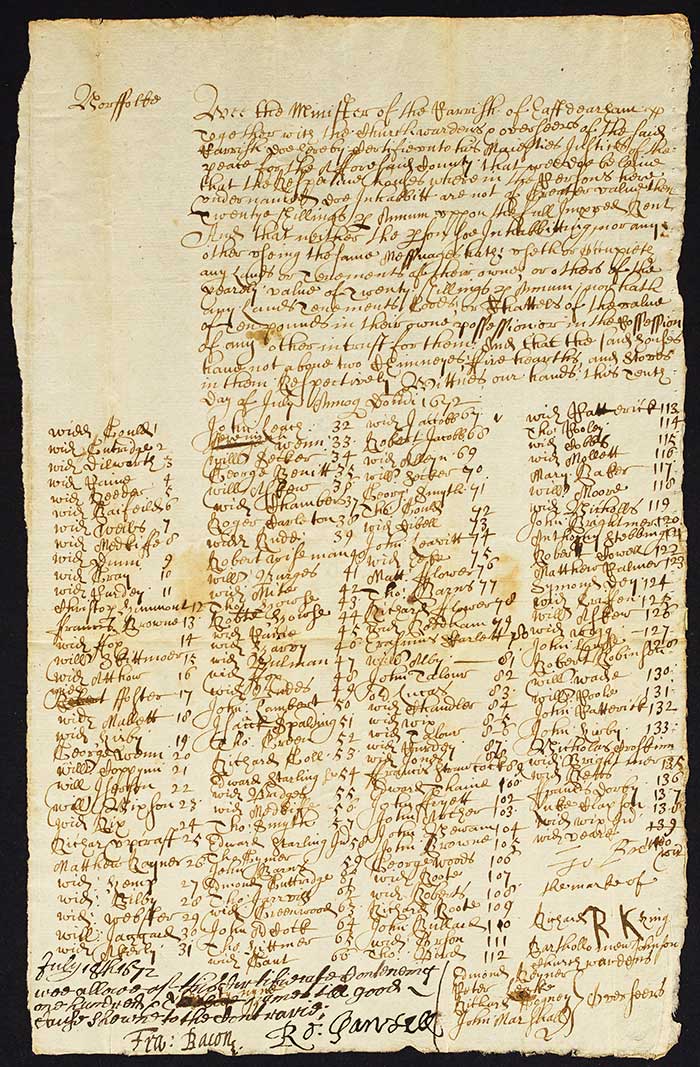 The certificates might be folded small and tied in bundles, or rolled up in bundles, and put into hessian bags or leather pouches. The certificates were ‘particulars of account’ in support of the parchment returns, and the bags were labelled ‘bags of particulars’ and sent with the returns to the Exchequer.

Some certificates are sewn together at the head, or have been bound in guard books, or have been given modern stamped numbers.  Such certificates have not been considered suitable for my project as they cannot be rearranged and may already have been listed in detail on the E 179 Database.

The counties I’ve listed so far are as follows: