At 08.19 on 8 October 1952 three trains collided with one another at Harrow and Wealdstone Train Station, some 11 miles to the north of Euston Station in London. One of the trains was a local passenger service taking early morning commuters from Tring to Euston, and the other was a passenger service from Perth to Euston. A third train, the 08.00 express travelling from Euston to Liverpool and Manchester ploughed into the wreckage created by the initial collision of the trains travelling from Perth and Tring. 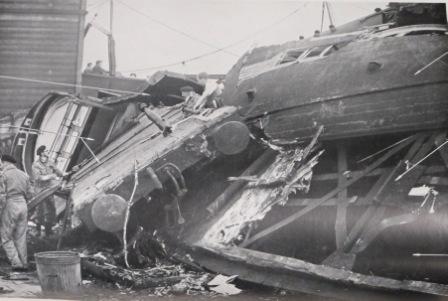 Photograph of the crash site in MEPO 11/95

A combination of poor weather (patchy fog),  misread signals and inadequate equipment led to a disaster that was only exceeded in scale by the disaster at Gretna Green in 1915, when 227 persons, mostly soldiers heading to the Front, were killed. The carnage of Harrow and Wealdstone can be comprehended if one considers the effects of a crowded passenger train (the Liverpool express) steaming into the shattered remnants of trains already wrecked and with their passengers and their effects strewn across lines. One disaster fed into another disaster. The casualty figures, high enough, would have been higher still were it not for the swift attention of passing detachments of the United States Air Force, who rushed to the scene of the disaster and applied life-saving field techniques learnt in wartime.

The disaster is well covered by records in the custody of The National Archives.   The official accident report in RAIL 1053/138 comes complete with photographs, maps and plans, the evidence of railway workers, the evidence of passengers who survived and includes recommendations and conclusions. These took into account the singularity of events at Harrow and Wealdstone on 8 October 1952, but also drew attention to the design of coaches used on passenger services – the type being manufactured in the years after the Second World War. The Occurrence Book of Harrow Police Station can be found in MEPO 11/95, and this includes the names and addresses of all of the victims, fatal and non-fatal, and also includes details of some of the personal effects recovered at the scene of the disaster. The names of passengers who ‘sustained serious injury’ are recorded in MT 114/21, and this document also includes newspaper clippings and papers relating to the testing of signalling equipment, the damage inflicted on the engines involved in the accident, an appraisal of rescue procedures and many single sheets concerning the returns of the Coroner for the County of Middlesex prepared on 30 October 1952. MT 114/27 includes an extensive collection of maps and photographs. An interesting account of the accident can be found in the November 1952 edition of British Railways Magazine (London Midland Region) in ZPER 22/3. 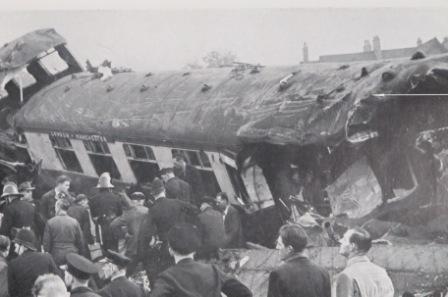 The Prime Minister, Mr Churchill, visited the scene of the disaster and praised the efforts of all of those involved in rescue efforts. The disaster is still well remembered today. On  8 October 2012 survivors, eye-witnesses and rescue workers gathered together at the site of the accident and the names of those who did not survive were read out.