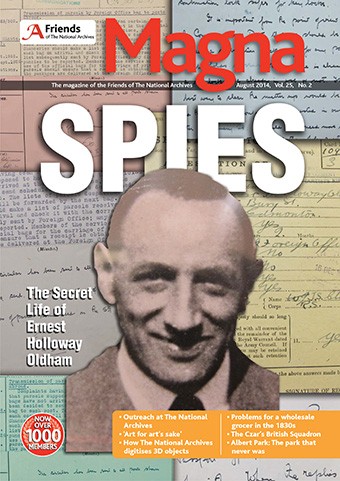 Yes indeed, the very happy lot of the Friends’ editor and the supporting band of volunteers. Time certainly flies and the end of this year will mark my fourth year in the role (with a short inter regnum in 2012). Our magazine, Magna, is published in April, August and December. The production of the magazine may seem all calm and measured, akin to one of the swans serenely progressing across the lake. However, in reality there are bursts of frenzied activity several months or so before each edition appears. A lot occurs out of sight so I thought I would take you behind the scenes.

The Friends were formed in 1988 and the magazine started life as a four, or sometimes eight, page newsletter. In 1992 the format was changed to an A5 sized parish magazine style. It contained features, snippets and short articles about the records held at the then Public Record Office (PRO). The magazine was imaginatively called Prophile to reflect the Friends’ association with the PRO. In 2007 the format changed to A4 and colour covers were introduced. With the change to The National Archives the magazine title became the rather cumbersome Magazine of the Friends of The National Archives. We switched to our current title in 2012 to once again reflect our connection.

To mark our twenty-fifth anniversary we introduced four colour pages and increased the size to 28 pages. This year we have made further changes thanks to the tumbling costs of digital printing. The magazine is now full colour throughout, the size increased to 32 pages, whilst the cost has reduced by nearly a third.

One of the fortunate challenges I face with every edition is deciding what to leave out because of space constraints. White space and nothing to fill it is an editor’s nightmare. There isn’t really a beginning to an edition, it is rather a seamless process as I work at least one edition ahead, sometimes two, to ensure I have plenty of material and choice available. Now that we have the services of a professional designer and compiler I can happily leave all those spacing issues for him to sort out. When I was compiling the magazine it was rather daunting – make a minor change on page two and something horrible would happen on page 15, hopelessly throwing my best intentions into turmoil! Those days have gone and I just potter along very contently sourcing topics and material.

I have splendid support from the records specialists in Advice and Records Knowledge – for that I am very grateful. I am always mindful that asking for an article means extra work on top of a busy schedule. However, members of staff often contact me offering their suggestions for articles and features. The magazine is for the membership and I always encourage members to make a contribution and share their research interests. If you are a Friend and you feel you have an article to be written – do get in touch. I also spend a lot of time looking through Discovery to identify records that may be of interest. I have learnt so much from just rummaging and talking to many people about their research interests.

When I took over the editorship I was keen to highlight the documents themselves, rather than just the message and information that they conveyed. The type and physical attributes of a source are just as important and so with this in mind there are now regular and fascinating contributions from Collection care. Features have been introduced that focus on a specific map, photograph and document in each edition. Variety is important but it is a very tall order trying to include something for everyone in each edition. I try to achieve a reasonable balance over the three editions of the volume, and with over a thousand years of history the choice is considerable.

There is also a rich collection of visual images to draw from in the collections to include in the magazine. Some of the images, for example the Board of Trade design registers (BT 43), or the Empire Marketing Board posters (CO 956) are quite stunning. Now that we have colour throughout this has opened up more options for presentation. 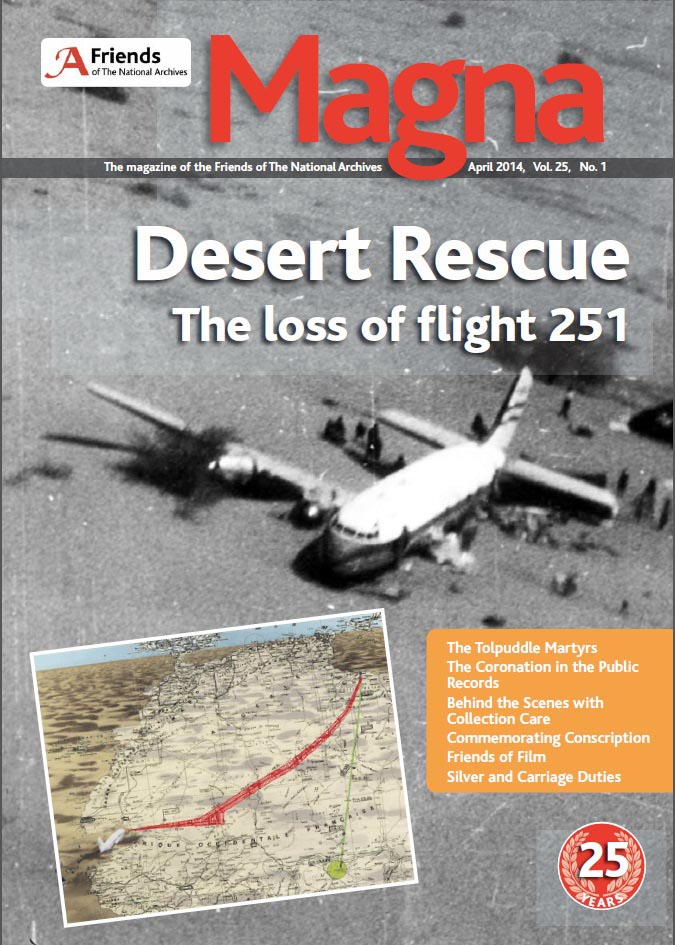 When articles are submitted they are circulated electronically to our team of six proofreaders. Initially an article is checked by one person and returned to me for amendment and sorting out queries with the author. Once that is done the articles are sent off to our designer and compiler. There is a lot of to and fro between us as we work out the best sequence so that everything fits together neatly. Once we have a completed draft it is circulated to the proofreading team for final comment and tidy-up. With the final amendments all resolved the magazine is uploaded to the printers in Buxton.

It takes about a week for the magazine to be printed and sent by courier to Kew. On hand is another small band of volunteers – fondly referred to as ‘the stuffing party’. Their not inconsiderable task is to put the magazines and any flyers into labelled envelopes for posting. Some members take their magazine in electronic format and others collect their copy from Kew, but that still leaves just under 900 envelopes to be ‘stuffed’!

And so with a gentle thud the latest edition of the magazine arrives through the letterbox in households far and wide. It is so satisfying to see the finished product, the result of many dedicated volunteers’ hours supporting the Friends through researching, commissioning, preparing, proofreading, formatting, approving for printing and then finally despatching from Kew.

However, print deadline days are always a scene of utter tranquillity and contentment. With a quiet determination and gentle ruthless efficiency all that needs to be done has been sorted. It is just a matter of deciding whether to have that second mug of coffee and ponder the cunning plan for future editions … another biscuit anyone?