Home > Blog > Happy centenary to you!

Happy centenary to you!

It’s a pleasure today to wish a happy centenary to Bedfordshire and Luton Archives and Records Service which – as Bedfordshire Record Office – was the first ever county record office to be founded in Britain, in 1913. As any archive student knows, this foundation was the start of a network of county-based archive services which came to form the backbone of local archive provision in the UK.

…Except any archive student also knows, it’s a bit more complicated than that! 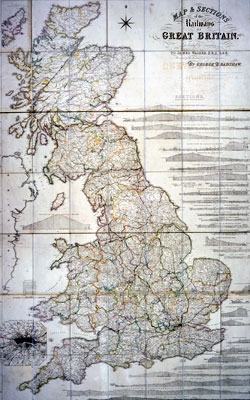 RAIL 1031/10: Bradshaw’s 1839 railway map of the UK. Like the railways, a local archives network stetches across the country

By 1913, there were already many local institutions deeply involved in preserving local records. Some were within local authorities themselves – the clerks of the peace and those who cared for city and borough muniments. Local public libraries collected important historical documents. And in some areas, antiquarian, archaeological and records societies were providing a third sector solution, collecting and preserving their local history through voluntary effort. 1 The solution that Bedfordshire adopted, of a county records committee which evolved into a record office run by the County Council, was by no means the only solution. (Hertfordshire actually got there first with the records committee model, though they don’t claim to have had the same unbroken institutional history.)

The 1920s saw progress in local records provision, but still no consensus about the best approach. It is not until after the Second World War that we can definitively see the county record office becoming the most usual pattern for local archive services. Today, the picture is far from standardised, especially in the larger urban areas where archives are still most commonly found within library services. (But the county record office model is a strong one. At the UK Chora conference in 2011, I heard suggestions that there is still – and certainly used to be – a bit of snobbery about working for the metropolitan library services. Not quite a good as being a county archivist, apparently!) Local archive services are also increasingly likely to be spun off into trusts, technically ending that long history of direct custody within local authority hands.

Yes, it’s complicated, but the foundation of Bedfordshire Record Office is well worth remembering as a landmark in the provision of archive services in the UK. Dr GH Fowler, the first county archivist, had huge influence over the development of archives practice in the UK, by publishing key texts, establishing methods of dealing with common record types and undertaking local surveying, and by training up those who went out to found new county record offices elsewhere. These were the years when the archives profession in the UK began to become – and to think of itself – as a profession. The Bedfordshire model, well-established and well-supported, was extremely influential. And for that we should thank the former Bedfordshire County Council, Dr Fowler, and those who followed.

You can find archives in your local area, including all the local authority archive services in the UK, in the ARCHON directory.