Happy birthday to us!

Today marks the 40th anniversary of the opening of The National Archives’ building (then the Public Record Office) at Kew by the then Lord Chancellor, Frederick Elwyn Jones. Three months later, on 23 February 1978, HM the Queen made an official visit to the site. The new building was featured in the national media – including the BBC TV current affairs programme Nationwide in 1977, and Blue Peter in 1978. Footage from the Blue Peter episode is on display here at The National Archives in the Keeper’s Gallery until the end of the calendar year.

The Kew site has been used for a variety of purposes over the past 150 years. It was originally occupied by market gardens, but the construction of the railway embankment separated the area from Priory Park, the location of the original farmhouse. The first purchase of land was in 1915; in subsequent years up to 1922 a variety of permanent and temporary buildings were constructed, including a military hospital during the First World War – although the land was prone to flooding and it was flooded at least once in the 1920s.

During the Second World War, the building was used to house Italian Prisoners of War and to accommodate American GI’s prior to D-Day. An experimental open office was constructed on the site  in the late 1960s (demolished in the early 1990s). When the Department of Health and Social Security record office was established in Newcastle some of the existing buildings were used for a variety of purposes: Inland Revenue Sorting Centre; Post Office Savings Bank; emergency Women’s Royal Voluntary Service (WRVS) clothing store; off-site storage of House of Lords records; storage of Natural History Museum spare exhibits.

By the 1960s, additional accommodation for records and readers was needed by the Public Record Office (PRO). The Land Registry wanted the PRO Census Rooms out of the Lincoln’s Inn building, in the City of London, and the lease for Ashridge repository in Hertfordshire was due to run out in 1984 and would not be renewed. Preparations began in 1969 following a detailed survey of holding and usage rates.

Credited as architect of the building is John Cecil Clavering. In his obituary published in the Times on 24 October 2001, the building at Kew was described as ‘his masterpiece’ and his last project before his retirement. He was also architect for a chain of Odeon cinemas in the 1930s.

Construction started in May 1973 and the river embankment was raised to protect the site from any further flooding.  The building was taken over by the PRO in May 1977. Between 45 and 48 shelf-miles of records were moved from three sites to Kew between May and November 1977 in three-foot parcels. Each parcel was individually addressed to its new home in advance. Each document had a coloured label fixed to its packing in advance of the move to indicate which floor it would be stored on. 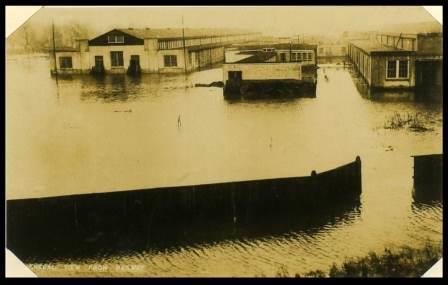 PRO 62/1: this image, taken from the railway line, shows the extent of flooding to the site in the 1920s before the raising of the river embankment

The shape and the areas of the building were determined by their functions. The design accommodated 72 miles of shelving, and it was anticipated that this capacity would last until the year 2000, although the height of the building had to be reduced as the local residents objected to it.  The top floor was lost, to be replaced by a smaller basement storage area.  Standard shelving is present in the majority of our repository areas (adjustable at 1” centres); 20,000 steel uprights and 120,000 shelves were initially provided, with a further 20,000 supplied shortly after occupation.  Each of our storage floors covers 1¾ acres.  Overhang and double glazing provide shielding against solar gain and aircraft and railway noise.  There are also upper cladding panels in three sizes; seven, nine and 11 metric tonnes.

PRO 62/3: Artist’s impression of the PRO Building at Kew 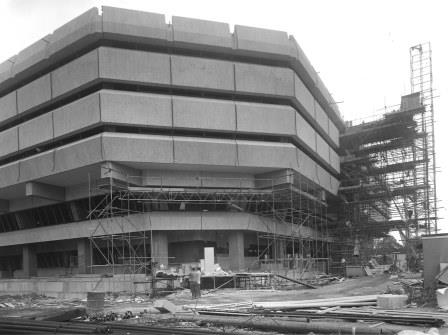 The storage areas are air-conditioned and a double roof provides extra protection for the fourth floor against solar gain.  There was originally a stainless steel covering on the outer roof, thought to be the largest of its kind in Europe.  The offices and public areas are all air-conditioned during working hours.

The popular records are kept close to the centre of the building, facilitating quick production to the reading rooms via a document delivery system known as the ‘paternoster’. The anticipated workload was distributed over our storage floors according to a plan intended to keep production times consistent.

At the time of construction, the capacity of the reading rooms was around 550 seats: 510 on the first floor with the remaining 40 on the second floor.   Many of the features installed at the time remain today. There is a central research enquiry point and a computer system for ordering documents: this was a very early example of successful use of computers by the general public.  CCTV cameras are installed above each reading room table to facilitate remote invigilation.  Until 2004, readers were notified of the arrival of documents by radio pagers which were linked to their allocated seat numbers.

The vertical paternoster document delivery system was replaced by the Telelift document conveyor system, a computer-controlled car-and-track system using one hundred gimbaled containers running between both buildings and all floors.  The Langdale reading room (now known as the document reading room) is to the left as you enter the first floor from the stairs and the Romilly room is to the right.  The Romilly room was not used during the early years and was later opened as a microfilm reading room: it is now the research and enquiries room. Separate counters were provided for the collection of documents and the ordering of copies. 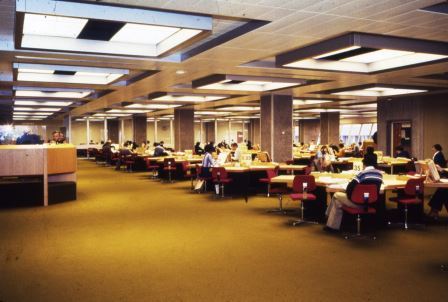 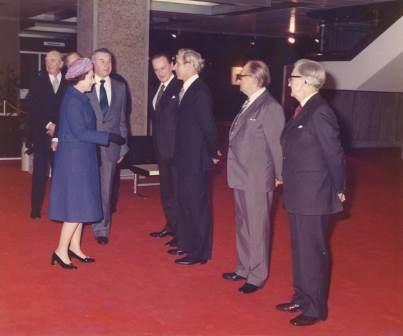 PRO 62/7: Three months after the building’s official opening in November 1977, the Queen made an official visit

Construction of the second building (known internally as ‘Kew 2’) began in March 1993. The architects were TBV Consult, the project managers were PMI, and the main contractor was Kyle Stewart. 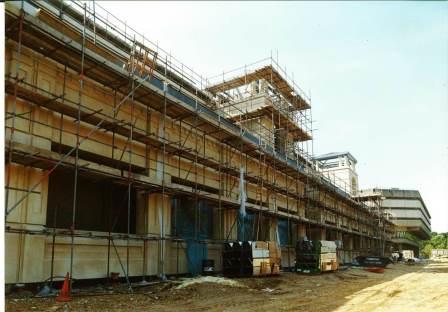 The bulk of the new building comprises of 12 independent repositories on four floors. Each repository has its own air-conditioning unit and environmental controls, and has been fitted with a very early warning smoke detection system.

In total, the new repositories can house up to 74km of records. Access control to the building, and separately to the repositories, ensures that the documents are kept in safe conditions.

The Conservation suite is one of the finest in the country, bringing together the collective expertise of the organisation’s highly-skilled conservators.

The new building was completed on 8 December 1995. 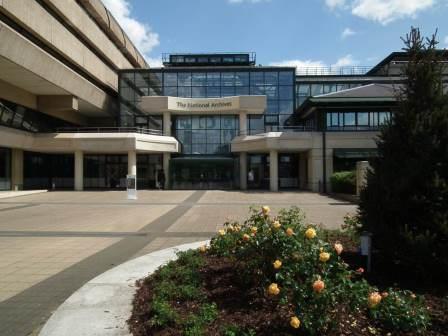 The National Archives at Kew as it is today

Staff began moving in soon after the construction of the new building was completed. The final moves occurred at the end of 1996, after the original document reading rooms at the PRO building in Chancery Lane were closed on 6 December.

In total, 55 kilometres of records were moved by the end of the programme, as well as 60,000 rolled maps, between and within all the various sites of the Public Record Office.

Between 2003 and 2006, the Public Record Office, the Royal Commission on Historical Manuscripts, Her Majesty’s Stationery Office and the Office of Public Sector Information  – each specialising in particular aspects of managing information – joined together to form a single organisation,  The National Archives.

What the next 40 years has in store for us is unknown but our presence here in Kew has made us a key part of the community; going forward, we hope to continue engaging with our neighbours and the wider community with an increasingly varied and diverse offer of events and exhibits.