Today marks the 350th anniversary of the Royal Marines. It is an achievement that almost wasn’t achieved at all, as they have faced extinction several times in their history. Not least in their troubled infancy.

350 years ago today, at a meeting of King Charles’ II Privy Council, a directive was issued to raise a new Regiment for the Army: the Duke of York and Albany’s Maritime Regiment of Foot (PC 2/57 f138). As James, Duke of York, and later James II, was then also Lord High Admiral the Regiment became known as the Admiral’s Regiment. Originally raised with 1,200 soldiers their purpose was to serve at sea on ‘his Majesty’s Fleets’. 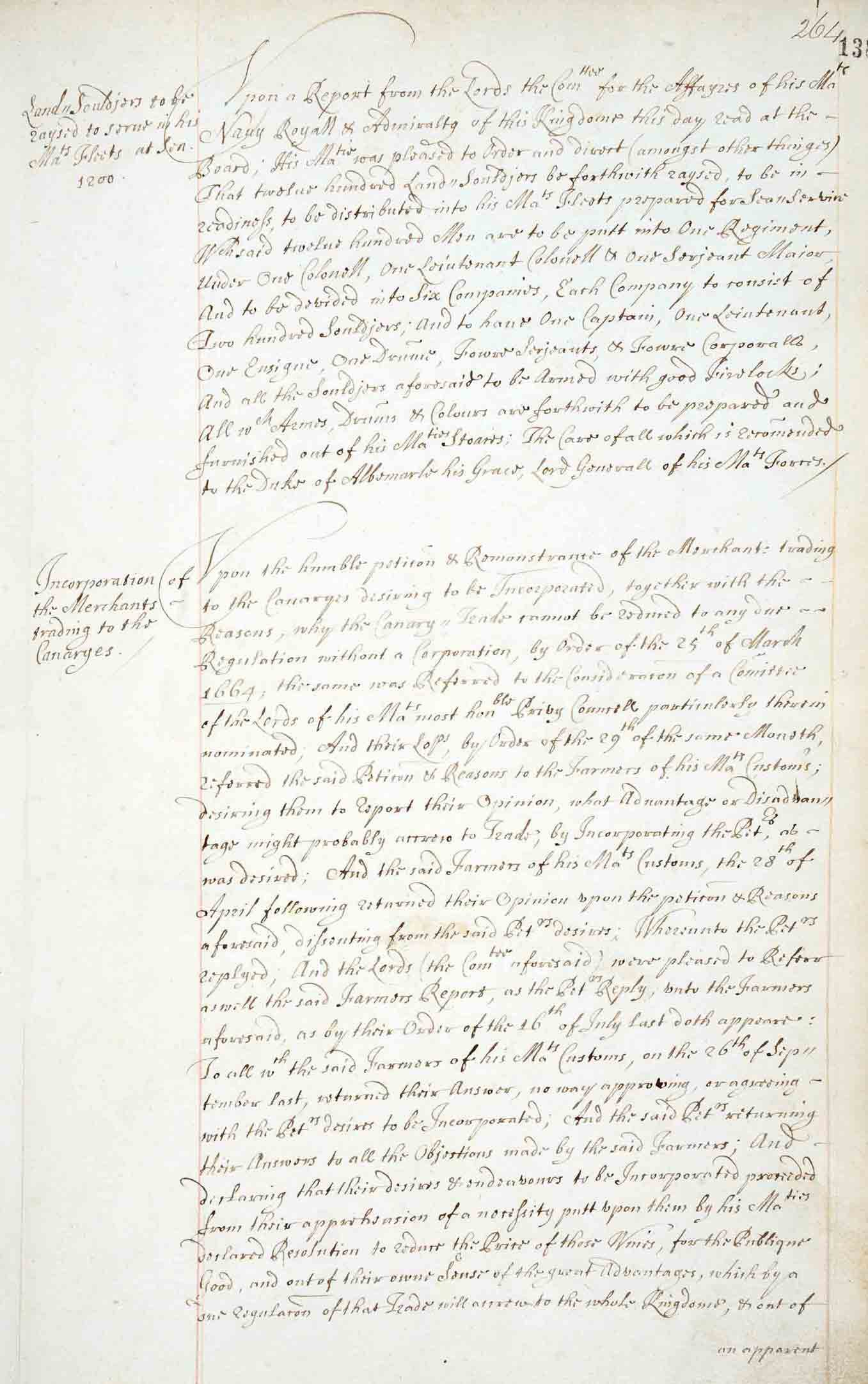 Order in Council for the formation of the Duke of York and Albany’s men. Catalogue reference: PC 2/57 f138

It wasn’t long before the regiment saw action. They fought in three major battles during the second Anglo-Dutch war: the Battle of Lowestoft on 13 June 1665 where the English fleet was commanded by James himself saw the English defeat the Dutch ,but fail to press home the advantage. They also fought in the Four Days’ battle between 11-14 June 1666 where the Dutch turned the tables and in the St James’ Day battle of 4 August 1666 which saw another English victory (all dates new calendar).

James, meanwhile, set about alienating himself from his subjects over his Roman Catholicism, and by the time William of Orange landed in Torbay in 1688 to lead the Glorious Revolution, James had lost the trust and confidence of the army.  Most of the army went over to William’s side, but the Prince’s regiment remained loyal to James. The regiment’s loyalty was its undoing and it was disbanded in 1689.

A year later two Marine regiments were raised for sea service. However, as they were part of the Army but serving the Admiralty they were ill used and often filled in the gaps in ship’s companies. The financial system could not cope with paying Marines distributed across the fleet and the men often went unpaid for long periods of time. 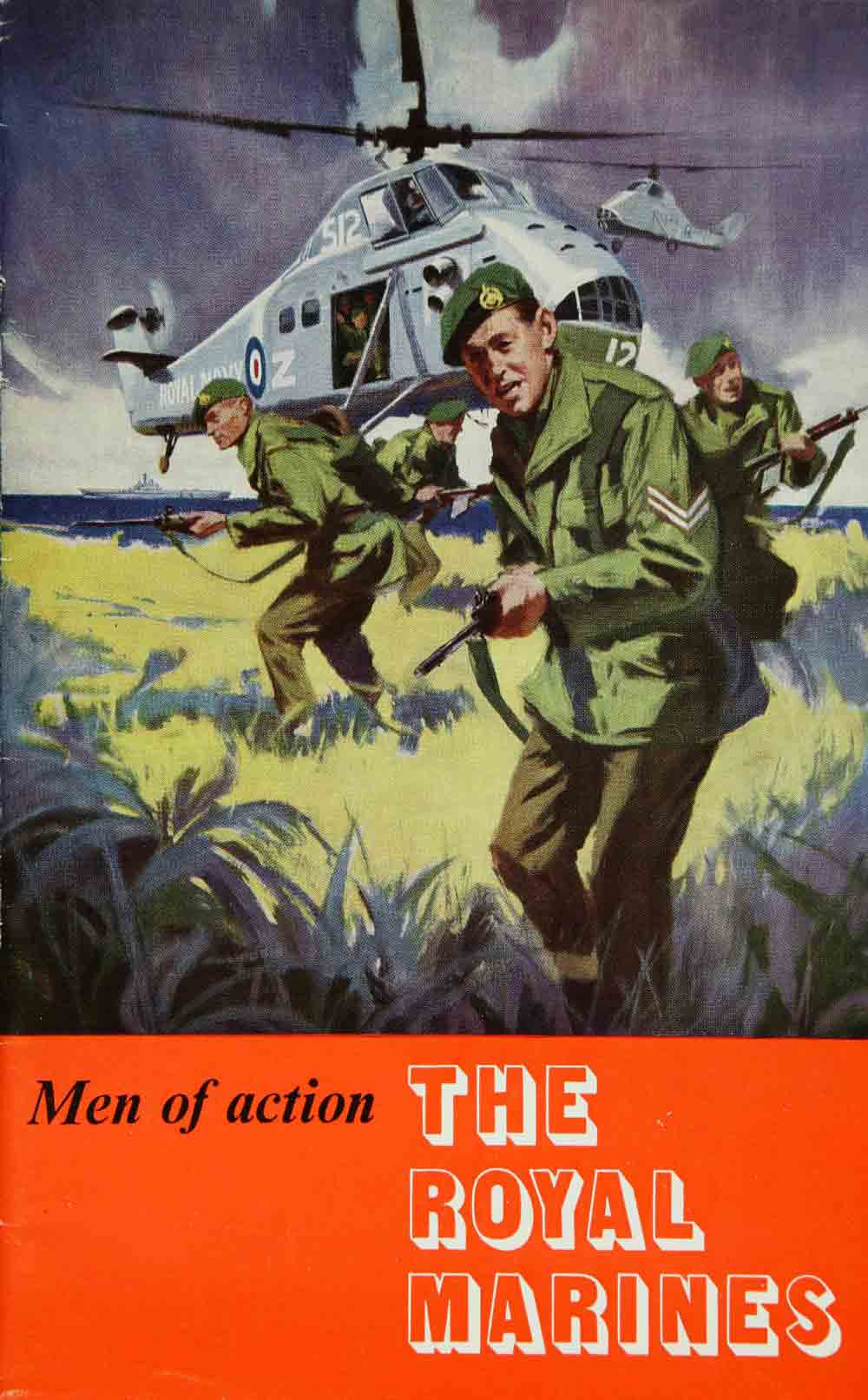 In June of 1672 the Dutch surprised the English Fleet in harbour at Solebay, in what turned out to be the first battle of the third Anglo-Dutch war.  Lord Arlington’s secretary, Captain Taylor wrote ‘those marines of whom I so oft have wrote you, behaved themselves stoutly’. The sea soldiers had become marines.

By the time peace came to Europe in 1697 there were four marine regiments. Unfortunately their fate was tied up with the rest of the army and they were disbanded and joined over 70,000 other soldiers whose services were no longer required.

Peace did not last long and when Carlos II of Spain died without an heir, Louis XIV of France claimed the throne for his grandson, Philip. Archduke Charles, son of the Austrian Emperor also staked his claim. Parliament authorised the raising of fifteen regiments amongst them six marine regiments.

During the war of the Spanish succession, in 1704, Gibraltar was taken by a force of mostly English marines. There was fierce fighting over ‘The Rock’ and the marines in a report on the defence of Gibraltar were said to have ‘gained an immortal honour’. The treaty of Utrecht, signed in 1713, brought an end to the War of the Spanish succession and gave Gibraltar to England in perpetuity.

Peace brought disbandment again and for 26 years there were no marine regiments.  Six regiments were raised again for the War of the Austrian Succession, and in 1741 all of them were sent to Jamaica to prepare for action in Cartagena, South America. The journey to Jamaica saw about a quarter of the 9,000 strong force die or become sick, and yellow fever spread through the force. By the end of the expedition only one man in ten survived.

In 1748 the marine regiments came under Admiralty command and in 1755 the decision was taken that the establishment of Marines should be 5,000 and they should be divided into three divisions at Portsmouth, Plymouth and Chatham. The marines as we now recognise them through the records of the next 250 years and more had arrived.

You can help us unpick the story of the next 250 years through a new project being launched today. The records in ADM 158, Royal Marine Description books, cover hundreds of thousands of serving marines from 1760 to 1925.  We are digitising these records in a new ‘working from home’ volunteer project.  To register your interest in taking part please contact volunteer@nationalarchives.gov.uk.