Guest blog: Do you believe in UFOs? Part 1 of 2

Do you believe in UFOs?  According to opinion polls a third of us do and the files released by The National Archives today show that belief was shared by some politicians and high ranking military personnel.

The Ministry of Defence first began to investigate UFO reports from credible sources at the height of the Cold War when, in 1950, it set up a ‘flying saucer working party.’ But files at The National Archives suggest MoD ‘s real concern at that time was invasion not from outer space, but from behind the Iron Curtain.

So while ‘the real X-files’ do not prove UFOs exist in the popular sense of alien spacecraft, they do provide a fascinating insight into how the MoD dealt with a troublesome topic that always generated sensational headlines. And the fact that, until recently, files on UFOs were closed for a minimum of 30 years simply encouraged those who suspected conspiracy and cover-up.

Within the 25 files released today is a UFO briefing prepared for former Prime Minister Tony Blair by the Ministry of Defence in 1998. New Labour’s pre-election manifesto included a commitment to a Freedom of Information bill and a UFOlogist from the West Midlands, Nick Redfern, urged Mr Blair to ‘consider making available for public scrutiny all of the many and varied UFO reports’ collected by the government since the end of the Second World War [DEFE 24/1987/1].

Every new Prime Minister receives a postbag of requests asking them to release UFO data but from January 2005 – when FOIA was implemented across central government – the pressure to disclose the files could not be resisted. Within six months the topic became one of the three most popular subjects for requests to the MoD.

And here I have to declare an interest because for most of that decade I was one of the MoD’s most ‘persistent correspondents’. Working as an investigative journalist, I targeted most of my FOI requests around those UFO stories that appeared to have a strong public interest element – such as examples of near-misses between airliners and unidentified ‘aircraft’. As a result almost a third of the material contained in this tranche chronicle the working relationship that I developed with the UFO desk officers. 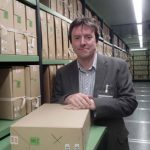 This resulted in several invitations to meetings at MoD Main Building to discuss how UFO sightings were investigated and future plans for the release of documents. It is quite a strange experience in itself to revisit your own correspondence, preserved for posterity in files at The National Archives. In hindsight, reading the minutes of one meeting I attended in 2004 it is obvious that MoD were working towards the day when they could ‘make UFOs history’ by releasing all their records to the public as the United States had done in 1970 [DEFE 24/2061/1].

So it was no real surprise to learn that, soon after our meetings, a decision was taken to transfer all the surviving files to The National Archives. This was followed in 2009 by an announcement that the UFO desk and its telephone hotline service – which had operated since the 50th anniversary of the Roswell incident in 1997 – were to be terminated. After almost 60 years, the ‘real X-files’ were closed for good.

Most of those files have now been released and despite the closure of the UFO desk, the popularity of the subject continues unabated. The National Archives’ UFO website has been visited over three million times since the first files were opened in 2008 and 3.8 million documents have been downloaded by curious people from 160 different countries. Future generations will use the unique archive preserved at Kew as a means to explore the extraordinary beliefs and traditions of the late 20th and early 21st centuries.