The Great War British bake off 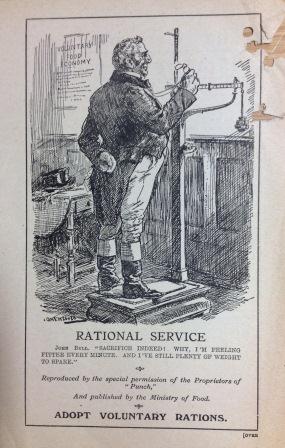 A Ministry of Food pamphlet from 1917 using the image of a dieting John Bull to encourage voluntary rationing (catalogue reference: NSC 7/37)

It’s the time of year when the majority of Britain goes bonkers for bread, loopy about lamination, gets puffed up about pastry, and in a palaver about Pavlova – the return of the Great British Bake Off. Column inches and workplace gossip are suddenly given over to talk of things being over-proofed and fears of a ‘soggy bottom’, and much of the nation (at least fleetingly) goes baking mad.

However, it’s not only in 2015 that Britain has become fixated on baked goods, with bread, cakes and pastries of all stripes causing a similar hullabaloo on the Home Front during the First World War. The difference is that while now Bake Off fever seems to bring about an increased intake of baked goods (certainly our experience in the Advice and Records Knowledge office!), a century ago, there was a concerted effort to reduce Britons’ consumption of wheat.

Poor harvests at home and abroad, a lack of food imports caused by shipping losses and low foreign currency reserves, and a drain of manpower from Britain’s farms to the military, all left the country’s food supply in very real peril. 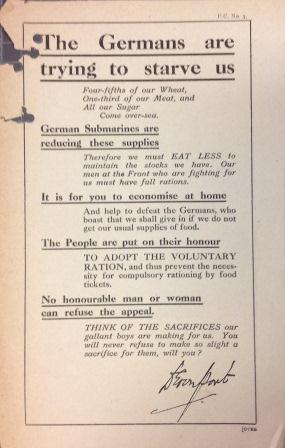 By the winter of 1916 the danger to Britain’s food supply had become acute. David Lloyd George made steps to stave off a catastrophe by utilising the same approach he had when rationalising industries producing the munitions of war – establishing central government control and regulation of all aspects of agriculture and food. On 8 December 1916, just two days after he became Prime Minister, Lloyd George established the Ministry of Food, with its chief position, Food Controller, filled by Lord Davenport, whose own fortune was derived from a successful grocery business.

The Ministry of Food presided over many initiatives to increase Britain’s food production, promoting more efficient agriculture and establishing the Women’s Land Army in 1917 to make up for the labour shortfall in agriculture, caused by male workers joining up. Food was still a regular concern for the government though, with Davenport explaining to the War Cabinet that feeding the nation after September 1917 presented, ‘a difficult problem’, and mooting the idea of compulsory rationing. 1

Rationing was eventually introduced in early 1918 by Davenport’s successor as Food Controller, Lord Rhondda, but before that the Ministry of Food tried many ways to limit the consumption of wheat and other cereals.

One initiative used by the Ministry was the creation of ‘standard bread’, made using ‘G.R.’ (government regulation) flour. This flour was milled coarser than its pre-war equivalent, so that less grain could be used to make the same amount of flour. However, while this flour increased quantity, it was quality that suffered, a matter of concern to the government, with a Cabinet memoranda warning at the time that:

‘There will be a popular prejudice against interference with the texture and colour of the loaf … especially as it is improbable that he change of standard will be accompanied by a reduced price.’ 2

More efficient flour production wasn’t the only way in which the government tried to conserve its wheat stocks: it utilised its wartime propaganda machine. Bodies like the Ministry of Food and the National Savings Committee producing publicity material to promote belt tightening and lowered consumption across the land. 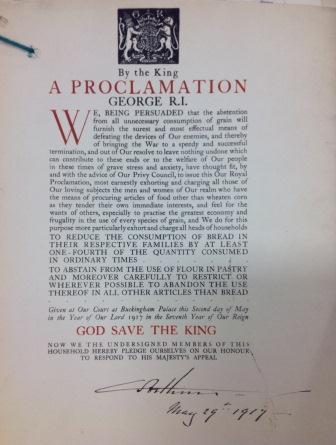 This poster uses a royal proclamation to try and coax the population in to eating less bread, quoting the King’s declaration that:

‘We, being persuaded that the abstention from all unnecessary consumption of grains will furnish the surest and most effectual means of defeating the devices of Our enemies… Issues this Our Royal Proclamation most earnestly exhorting and charging all those of Our loving subjects… to practise the greatest economy in the use of every species of grain.’

In an ingenious move the proclamation then asks the members of households to attest the King’s request to, ‘REDUCE THE CONSUMPTION OF BREAD IN THEIR RESPECTIVE FAMILIES BY AT LEAST ONE FOURTH’, presumably to display this in their window, shaming their neighbours into similar war time parsimony.

Not only was bread in the First World War made of lower quality flour and weaponised in a campaign for competitive frugality, it was also likely to not be made entirely of wheat flour. Maize, rice and other cereals were a regular feature in the war time, but the government’s star wheat substitute, so to speak, was the humble potato.

The Ministry of Food’s campaign for the compulsory use of potatoes in bread came to a head in January 1918, the Ministry informing Cabinet that potatoes were of advantage because they were ‘purchased in this country and save flour which would have to be purchased in the United States by means of dollar credits’. 3 Economy was not the only thing on the humble spud’s side; the use of potatoes in bread was a long established substitution technique, and Ministry of Food testing found that it was also quite an agreeable one. 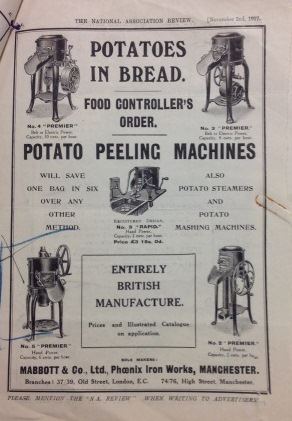 The Ministry’s files on ‘potatoes in bread’ contain a lengthy report Janet E Lane Claypon, who later became a well known epidemiologist. In wartime though, she seems to have at least briefly been occupied by testing potato-filled baked goods. Not only did she find that potato bread was very agreeable, she also asserted that pastry made with equal parts flour and potato, ‘bakes well and is very good’, allowing that ‘there is perhaps a slightly heavy taste … this is not at all unpleasant’. Moreover, puddings made with half flour, half mashed potato, were not only ‘indistinguishable from ordinary puddings’, they were ‘perhaps, even somewhat lighter than the usual recipe’. 4

The Ministry went about promoting its scheme to bakers across the land, with travelling officials demonstrating the marvels of potato loaves and generally meeting enthusiastic support. Furthermore, the Ministry set up priority contracts with engineering firms, to ensure that bakers utilising potatoes could get hold of labour-saving devices to process the tubers. The Ministry of Food files at The National Archives contain copies of adverts for a myriad of potato peelers, steamers and mashers, much of it cannily alluding to the Food Controller’s desire for more potato bread. 5

Bakers were not the only ones subjected to a PR assault. The Ministry also mounted a substantial public media campaign on behalf of the potato loaf, sending sample loaves to many newspapers. The reviews, many of which are collected in The National Archives’ files, were almost entirely positive. The Liverpool Echo was particularly gushing in its assessment, commenting that:

‘The appearance of the bread was excellent – it had a rich, golden brown crust which one sees more often on bakers’ advertisements than on their bread.’

The texture was also praised, the moisture from the potatoes lending a ‘newness’ to the loaf even after several days, whereas ‘G.R. flour alone would have been dry’; the taste, meanwhile, was ‘above reproach’. 6 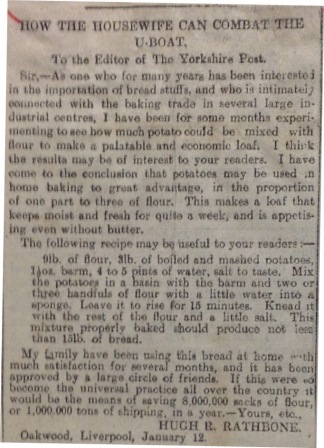 Letter from Hugh R Rathbone to the Liverpool Echo on the subject of potato bread, 12 January 1918 (catalogue reference: MAF 60/251b)

The Ministry of Food and the nation at large faced a formidable food crisis during the First World War, but through various efficiencies, schemes, economies, and the help of the humble potato, managed to scrape by with at least a minimum amount of sustenance.

Whether the potato loaf was as palatable as the papers claimed, I do not know. However, thanks to Hugh R Rathbone, a self-proclaimed baking expert and prolific correspondent to newspapers promoting potato bread, we have recipe to make 15lbs of the stuff, preserved in The National Archives collections:

‘9lb. of flour, 3lb of boiled and mashed potatoes, 1 ½oz. barm [foam skimmed from fermenting liquor, a raising agent], 4 to 5 pints of water, salt to taste. Mix the potatoes in a basin with the barm and two or three handfuls of flour with a little water into a sponge. Leave it to rise for 15 minutes. Knead it with the rest of the flour and a little salt. This mixture properly baked should produce not less than 15lb of bread.’

So, if you feel the grip of Bake Off fever any time soon, and you have a bag of sad looking spuds, perhaps you could try an authentic war time bake?