Not since the days of abjectly failing to collect gold rings as Sonic and, later, being repeatedly defeated by ‘friends’ on GoldenEye have I classed myself as part of the gaming community. This was mostly down to my inept gameplay rather than any particular aversion and, of course, the community is much developed from those relatively early days. Many gaming genres have emerged, with careful storytelling and developed design creating immersive and challenging experiences for players. 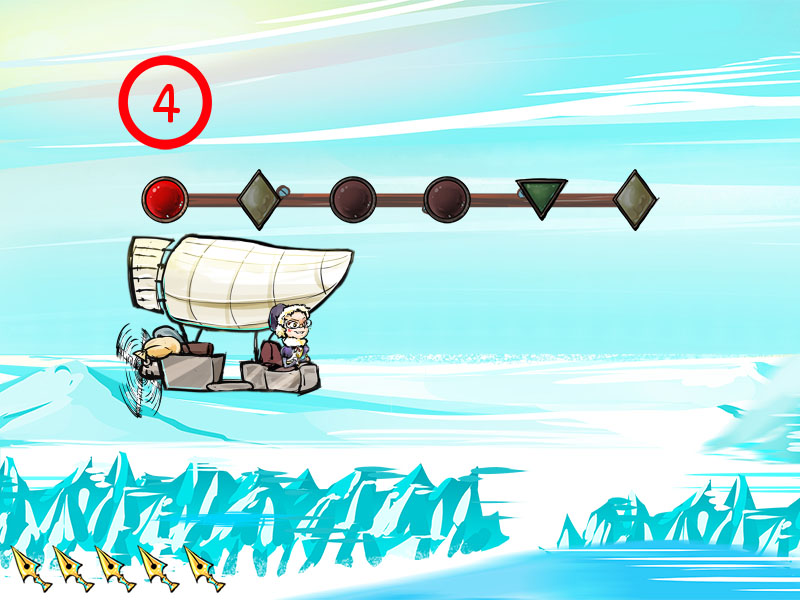 Still from Eleanor’s Notebook, one of the entries in The Great Steampunk Game Jam

The Galleries, Libraries, Archives, and Museums (GLAM) sector has also become involved in gaming, as a way of interpreting and presenting their collections. The British Library – and their annual Off The Map competitions – have really led the way in this regard, developing themes to allow student games developers to create vivid and exciting interpretations of their collections. Other institutions have made made memorable games, such as the V&A’s Strawberry Thief.

Over the weekend of 18-19 June my colleague Julie Halls and I teamed up with Jo Pugh of the University of York (and formerly of this parish) as part of the York Festival of Ideas, to host a game jam: participants had two days to create a game inspired by archival material held at The National Archives. We decided on the theme of ‘steampunk’, in an attempt to utilise some of our visual material created during the Victorian and Edwardian eras, and Julie’s record specialism.

To assist the participants we presented three different themes: Invention, Spectacle, and Unrest. We provided historical context, wrote stories to act as initial discussion points; and created a selection of documents and images from our collections available to potentially be used in the games. We were available over the course of the weekend to assist further with any interpretation of the records, as ideas were generated and initial designs tested. Following an initial discussion the teams set about developing their ideas and fuelled with snacks and pizza – generously provided by the University – worked late into the night and throughout Sunday to complete their creations.

Three judges – Professor Helen Petrie and Alenna Denisova (both of the University of York) and Victoria Hoyle (City Archivist, City of York Archives) – were asked to decide on a top three of the entries based on the technicality and playability of the games, and the interpretation of the archival material. Chris Power, also of the University of York and Able Gamers, judged a ‘most accessible’ prize, based on guidance provided on the wonderful Includification website.

All of the games submitted are available on The Great Steampunk Game Jam page on Itchio. 1  The most accessible award was presented to Hatastic, a game which alongside engaging game play and storytelling, carefully considered accessibility, through hints to assist players, ‘cheats’ so that people could reenter the game, and colour contrasts for easier reading. 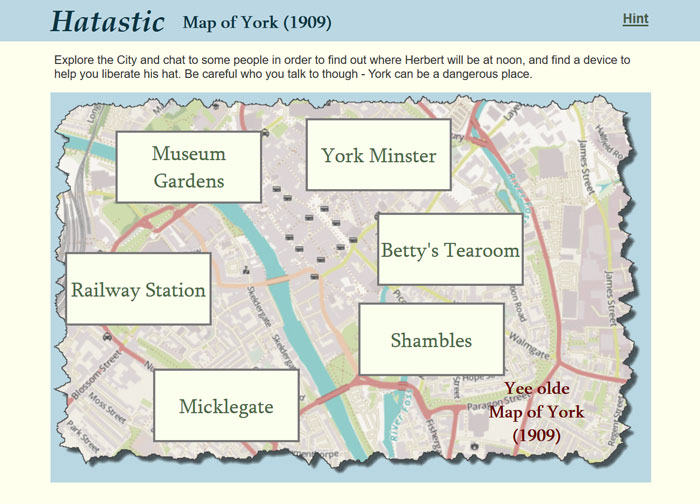 Map of York on the Hatastic game

Third place was awarded to A Victorian Trip, which picked up on all three main themes and created an immersive experience through a combination of attractive visuals and experimental sound and music. Strong accessibility – provided by a good contrast between text and background, and typed out descriptions from written documents for screen readers – also helped the game’s strong showing. 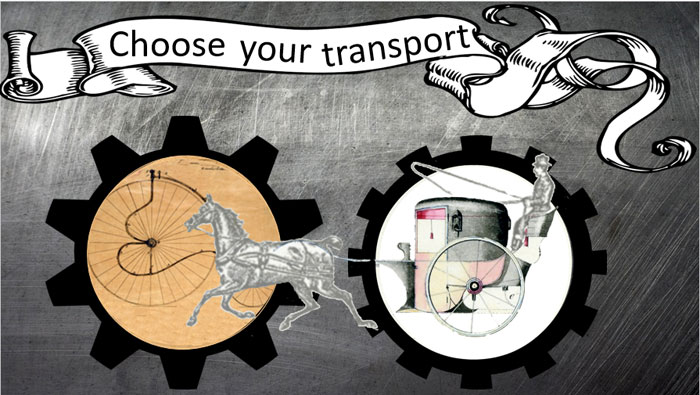 Transport panel from the ‘A Victorian Trip’ game

Second place went to Hatastic, which used the concepts of social disorder, protest and riots to create a game where the player travels around Edwardian York, following clues under the pretence of attempting to steal Herbert Asquith’s top hat.  Beware of under-cover policemen though! 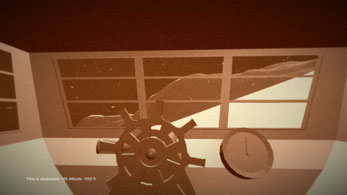 Still from The Great Airship Rescue, winning entry of our game jam

The winning entry was awarded to The Great Airship Rescue, which pulled together two themes, as an aircraft created to locate Sir John Franklin’s lost Arctic expedition had been sabotaged by protestors. The player is tasked with fixing various ailing machinery to keep the aircraft aloft. The game had included elements drawn from archival material, was well-designed, playable and fun.

The winning team worked together well over the weekend and were almost certainly helped by a fantastic presentation, led by a character in full Steampunk gear of long leather jacket and an impressively tall top hat. A generous £300 prize – provided by the Friends of The National Archives – was presented to the winning team. 2

Special mentions should also go to Eleanor’s Notebook, a beautifully illustrated game which saw the daughter of Sir John Franklin use a fantastical aircraft to try and locate her lost father; and to Aaron, the designer of The Great Leap, who at the age of just 14 demonstrated a high level of skill and application over the course of the weekend.

There were certainly a number of lessons learnt, not least that we could have structured the team’s initial discussions at an earlier stage and perhaps challenged one or two of the ideas earlier in their formulation. We could also have provided a greater explanation of what we would expect to be ‘acceptable’ themes, and reminded participants that a vague interpretation of the period would not necessarily be enough. However, overall it was a wonderful opportunity for us to see archival material interpreted in this way, and for such talent and skill to be demonstrated by the participants.