The National Archives, PRO, and government as a whole

The subject of my last blog post was the size of the Civil Service, and it occurred to me that an interesting proxy for this was The National Archives itself. After all, it is somewhat of a rarity for a government body. Firstly, it has a very long history. Second, its responsibilities have remained largely the same. And third, its level of activity tends to reflect that of the people who create records. My question therefore is: to what extent does an organisation like ours represent in microcosm the wider history of the public sector? As the record keeper, we have been obliged to deal with the scale of the civil service throughout our history.

The simplest indicator for any organisation in the public sector is funding but, first, a brief comment on my methodology. As the funding record becomes patchier before the Public Records Act of 1958, I’ve focused on the period after this. There are moments during the 1970s when constructing our first Kew building clearly became too much for the chaps in finance so they just gave up giving any figures for administrative costs. We have had to estimate these from previous years, along with some significant and arbitrary property charges in the 1970s and 1990s.

Further, I have not grappled with depreciation and all these funding figures include it. While accounting treatment will have changed from year to year, on the average I assume it will all come out in the wash. From 2003, The National Archives has also taken on around £3 million of extra responsibilities. However, our revenue has also increased significantly. On that basis, the figures I am using are the net cost of The National Archives to the taxpayer. 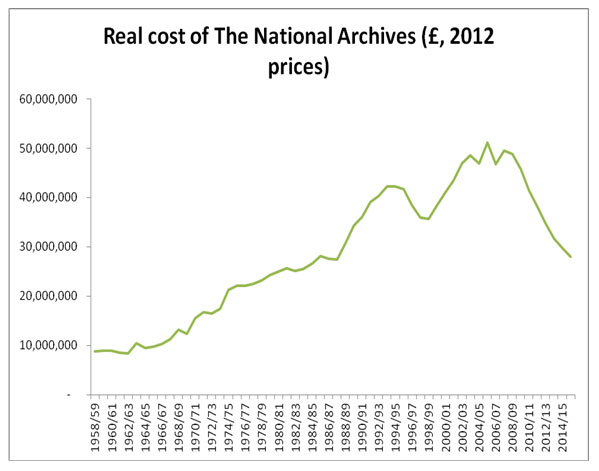 This is a figure without context until you add in some other indicators. When compared to GDP, the reduction until this year has largely taken The National Archives back to a long-term position relative to economic growth. One can make the argument that funding had become out of kilter with the wider economy in a historic sense, even during recession. The chart below shows this, with 1958 indexed at 100. This also shows that, based on the Office for Budget Responsibility forecasts for GDP, The National Archives will be below its long-term GDP-adjusted level of funding for the first time since the late 60s. The higher level of funding for the majority of the last 50 years corresponds to the expansion of the public sector over this time.

We can see from the burgundy line above that The National Archives grew even faster than the average of government spending over throughout the 80s and 90s. There is, even, a degree of lag in government spending. A big part of these two significant jumps stems from the addition (but not the construction) of the two parts of our Kew site, and the staff required to manage these.

From around 1988, The National Archives increases and decreases look like they are running around two years ahead of government spending as a whole – for example, we entered a period of flat cash from 2008 to 2010, representing a real decline.

My analysis has been relatively superficial, but it does tell a story of relentless growth, a plateau, and then a significant decline in funding. What it does not show is the efficiency of the organisation or the outcomes it achieves – public sector productivity. Bearing in mind our performance on the metrics as outlined in the annual report, I can probably make a case that so far, the 19% reduction in cost represents a straight 19% productivity improvement.

Finally, I am neither a professional historian or economist, and worked with the figures available from the 1958-2013 annual reports. In the interests of open data: my calculations and approximations – 1958-13 costs (XLS, 162 Kb), official statistics from the Office for National Statistics (ONS), and forecasts from the Office for Budget Responsibility (OBR).