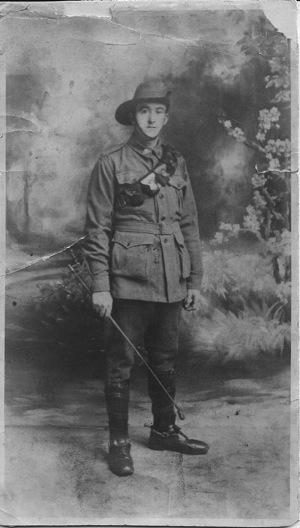 ‘My paternal grandfather Owen Joseph McGann was always something of a mystery. He died when my dad was only five years old, and so left no living impression on his children. What remained was the usual fog of oral legend that drifts around any family. He was a merchant seaman – routinely voyaging from his native Liverpool to the far-flung Pacific shores of Empire. Though christened Owen, he went exclusively by his middle name of Joseph. Relatives hinted that he wasn’t always the perfect husband to my grandmother. Yet little else could be divined: nothing to indicate his actions, character or lifestyle.

However, there was that photograph. A single brilliant photograph of Owen Joseph, posing in First World War Australian Infantry uniform. Australian Infantry? The McGanns had never lived further than the streets of Liverpool or the fields of rural Ireland. Yet here was my granddad, squatting like a lost Koala in the family tree.

‘He jumped ship in Australia, and signed up early in the war,’ said Auntie Mary. After that, she said, he’d been posted back to a training camp near Liverpool – where the superior pay, easy discipline and healthy rations of the Aussies were the envy of those British recruits from his old neighbourhood.

The photograph was a challenge – a story waiting to be told. Who was this ersatz Aussie? Where did he serve? Was it the gruesome cauldron of Gallipoli, or the churned mud of France? Was his war experience as exotic as the uniform suggested?

My subsequent research would reveal that Joe’s war was every bit as fascinating as I’d hoped. Though not quite in the way I’d imagined…

The earliest document that records his military service is the attestation paper he signed on enlistment into the Australian Imperial Force at Warwick Farm, New South Wales, on 15 September, 1915.  He signs up as ‘Owen Joseph’ – and interestingly his next of kin, brother James, is also resident in Sydney. These seafaring brothers worked for the same shipping line – the Pacific Steam Navigation Company – and so globe-trotting appears to have been an occupational habit.

My aunt’s story of Joe being posted to Liverpool is confirmed by further Australian military records. However, these documents soon take a less heroic tone – with Private McGann of 2nd Battalion docked pay at Liverpool for being Absent Without Leave over nine days in December 1915 – after serving a mere 83 days as a member of Australia’s finest.

His continued absence was soon to have more serious consequences. On 5 January 1916, a warrant was issued for Private McGann’s arrest on a new charge of desertion.

So what was Joe up to? He was nowhere near the front – and so there was no question of him deserting his post in battle. Was this behaviour unusual in the context of Australian military service in the Great War?

It would appear not. Scholars have noted that AWL was one of the most pressing problems confronting the Australian military during the war. In The Australian soldier in Britain 1914–1918, Roger Beckett observed that casual absenteeism accounted for over half of all military offences. Regardless of whether Grandad felt his absence to be petty or serious, the fact was that he was now on the run, as this listing in the New South Wales Police Gazette (£) demonstrates – complete with description of his seafarer’s tattoos.

So where was he in 1916? One would assume that he went back to sea. Service in the vast mercantile marine would likely provide an income and adequate anonymity to a stoker who kept his head down. Yet how could this sailor ultimately hope to hide from the attentions of military and civil law? The answer, when Private McGann finally re-appears in military records a year later, is as brazen as it is unexpected.

On 3 August 1917, Owen  – now calling himself simply Joseph – strolls into a recruiting office in Western Australia and enlists as a new recruit in the Australian Imperial Infantry for a second time. A second attestation paper reveals that fitter’s labourer ‘Joseph McGann’ was recruited in Fremantle, Western Australia. His next-of-kin, brother James, is now back in Liverpool. Amusingly, when asked to list his previous service, he states only that he’d been a member of the Royal Naval Reserve – omitting to mention his more recent military wanderings.

Joe then undergoes basic training at the famous Blackboy Hill camp in the Perth hills – the embarkation point for many Australian servicemen in the First World War. After receiving ‘extensive dental treatment,’ he is assigned to the 51st Battalion –  leaving Fremantle on the troop ship Canterra, and arriving in Southampton on 30 January 1918. However, upon arrival at a camp in Codford, Wiltshire, Joe quickly returns to his old tricks. His service record reveals several new charges of AWL, complete with pay docked.

There was one event he did turn up for, though. In July 1918, Joe married my grandmother, Elizabeth Walls – a laundress from Liverpool. Perhaps with the western front looming, he thought it time to put his life on a more respectable footing. But would Private McGann soon repeat his previous disappearing act, and vanish before his Battalion departed for France?

To the eternal relief of any blushing descendents, Joseph duly arrived in France with his battalion in August 1918. The war was at a crucial stage; the German spring offensive of 1918 had taken the battle out of the trenches, yet had eventually run aground. The allied counter attack known as the ‘100 days offensive’ was now underway. It would prove decisive, and the 51st Battalion AIF would play its full part.

Amongst British archivists, the subject of soldiers’ service records is a pained one. A fire as a result of enemy action decimated a priceless treasure trove of British troop records for the First World War. However, the Australian records were preserved in their entirety and provide a fabulous snapshot into the past. Unit war diaries, another principal source for First World War research are held by The National Archives, including those for some Australian units. These provide a moving and detailed account of 51st Battalion life and experience. Not simply troop movements, maps, enemy engagements – but also weekly menus, leisure activities like sports events, and training details. The human face of war seeps onto every page (WO 95/3523). 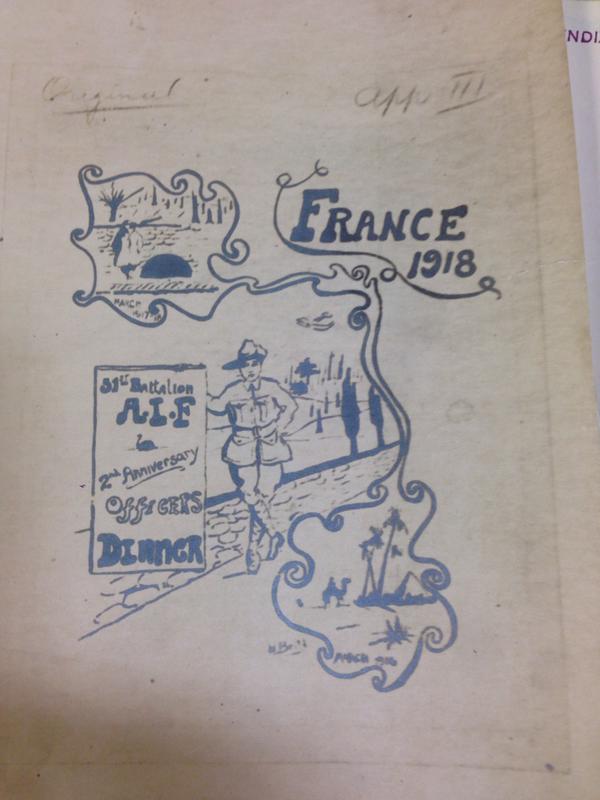 The 51st was stationed near to Amiens, and distinguished itself in battle during September in the successful allied attacks on the German defensive Hindenburg line. The Armistice followed in November. 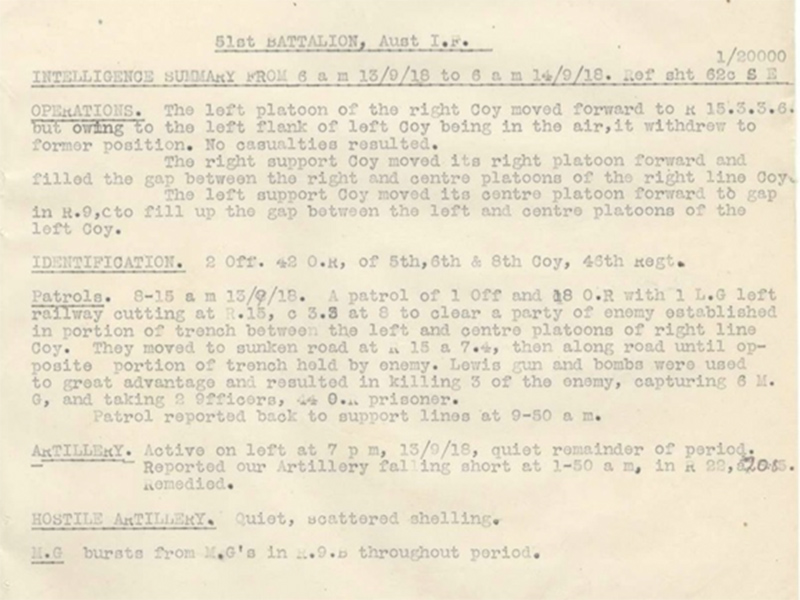 But what of Joseph? What do the records tell of his time with the 51st in France during this period?  The most notable aspect is that he was plagued by persistent gastric illness – which led to numerous periods of disability and treatment. Eventually he was diagnosed with gastritis and shipped back to England, where he spent six days in hospital in Dartford, Kent in 1919.

Just after this he was demobbed – completing his second term of service with a little more respectability than the first. He was even entitled to receive the Victory Medal – not bad for an active military fugitive! What’s more, his military record reveals that in January 1919 the warrant for Owen Joseph’s arrest was cancelled – leaving our former absconder free to enjoy his new married life as a decorated veteran, and not an absentee.

Despite this reprieve, Joseph’s old habits seemed a little hard for him to change… The final part of his military record concerns correspondence relating to the address to which Joe’s war medal should be sent. The medal is dispatched to his family address in Liverpool, but this is soon returned by his wife – who informs the authorities that her husband has returned to Australia, and can be contacted at a harbour café address in Melbourne, care of a certain ‘Mrs Ward’.

Family legend has it that a priest was dispatched to Melbourne to appeal to Joe’s Catholic conscience, and get him to return to his family. The appeal clearly worked – as Joe ended his life with Elizabeth in Liverpool. He was never known as Owen after the war – perhaps a precaution against exposure of his previous misdemeanours. Yet it seems that Joseph’s tendency to wander would ultimately come to define him: as a seaman, a soldier, and even as a husband.

And what of me, his descendent? What do I make of this revealing voyage around my light-footed grandfather?

Plenty, as it happens. I love Joe’s story. I am an actor by trade – not simply a lover of family records. I don’t believe in flattering pedigrees of blood, or the infectious sins of fathers – but I’m inspired by the bald tones of humanity revealed in any character through their actions and choices. Owen Joseph’s life was his own. His flaws too. The great gift of archives is their ability to hold an honest mirror to our collective conceits and human frailties through the mapping of true lives, truly lived – separated only by the paper-thin wall of time.

That is the treasure house of all good drama – and all meaningful history.’