‘Giving the Turks a drubbing’: The Battle of Romani

100 years ago, on 3-5 August 1916, the Battle of Romani was taking place 23 miles east of the Suez Canal. In what was to be the last attack of the war on Egypt and the Suez Canal, it was a convincing victory and marked the beginning of the British advance into the Sinai desert. 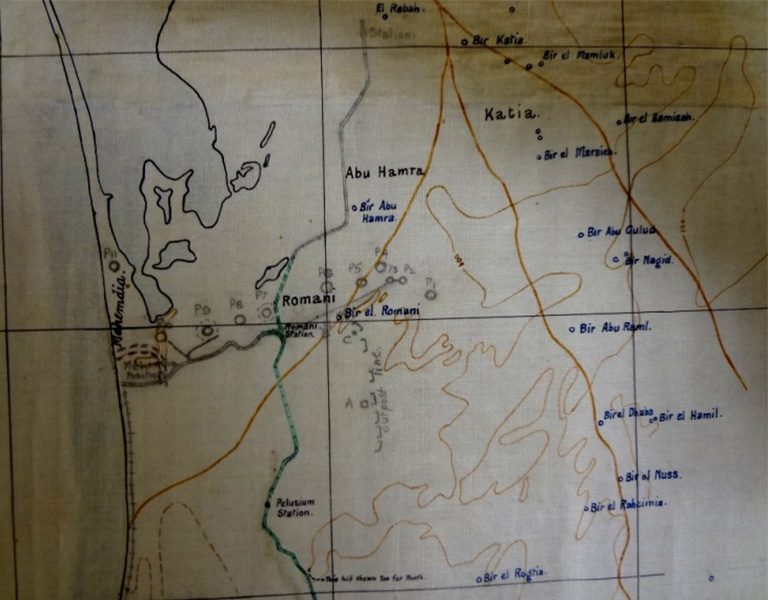 As early as January 1916, while he was still reorganising his forces in Egypt following the debacle at Gallipoli, General Archibald Murray told Robertson, the Chief of Imperial General Staff, that the best way to defend Egypt was to advance through the Sinai Peninsula to El Arish, almost on the border with Ottoman Palestine (WO 95/4360). The objective was to secure both the easiest line of approach to the canal and control over the main water supply of the peninsula (CAB 42/16/1).

Throughout 1916, Murray came under pressure from London to follow up this intention, at least in part because the War Committee struggled to comprehend the realities of the conditions in the desert. Any advance would have to be accompanied by the construction of a railway (the heavy sand made motorised transport almost impossible) and of a water pipe starting at Kantara, on the Suez Canal. The quality (or lack thereof) of the water was Murray’s first big surprise – he had not realised it would be too salty for men and even horses to drink. As a result, water would have to be pumped or carried forward from Kantara by pipe or camel train as temperatures were over 100 degrees in the rare shade (WO 106/715). 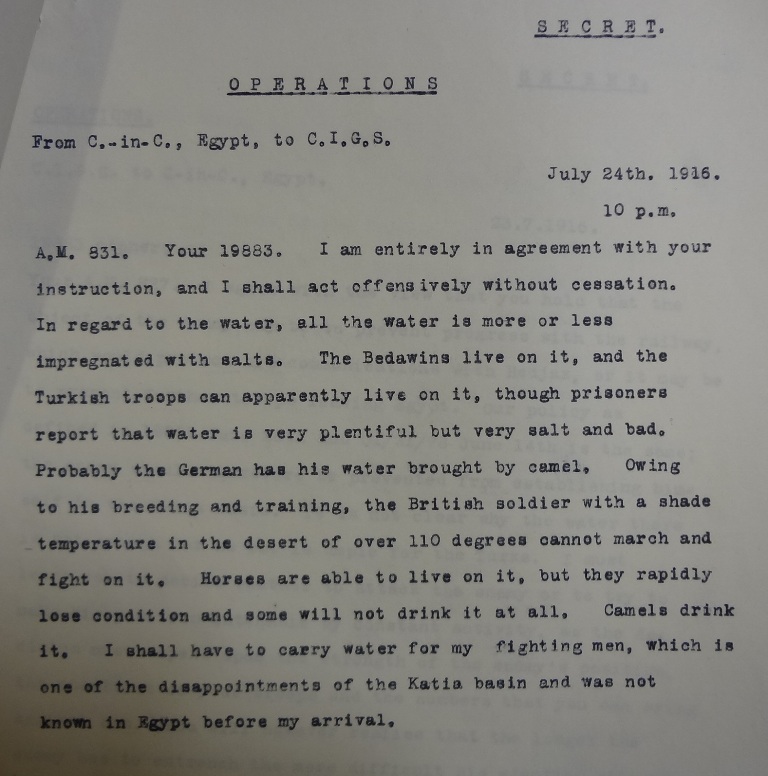 Pushing forward despite the intense heat and logistical complexities, Murray informed London in mid-April that he hoped to secure Katia by the end of the month (WO 106/715). This early exploration, however, led to a bloody nose as the British troops – still preparing the defences in the district – were taken by surprise in the early hours of 23 April, Easter Sunday. While the Royal Scots Fusiliers repelled the attack on Dueidar, the Yeomanry, inexperienced and facing superior numbers, were forced to surrender at Oghratina and retreat from Katia (WO 157/703).

Despite the somewhat embarrassing and heavy losses, Katia, Oghratina and Dueidar were not, in purely military terms, hugely significant (indeed, Katia was easily recaptured on 24 April). The psychological impact of the attack, however, was. The Intelligence Summary from GHQ recorded on 26 April: ‘the day was chiefly spent in endeavouring to counteract the pernicious effect of several ‘panic’ wires sent by officers in No 3 Sec[tio]n as regards the Katia fighting to ladies and friends in Cairo’ (WO 157/703).

Relative stability rained until mid-June, when Robertson asked Murray whether it would be possible to occupy El Arish in the autumn. He replied by asking for reinforcements, referencing the increase in Ottoman troop numbers that had been noted since May (WO 106/715). Such offensive planning, however, fell victim to the enemy’s initiative.

In mid-July, reconnaissance by the RFC noted an Ottoman advance in the Sinai (AIR 1/2292/209/75/1). This force, under the command of a German, Kress Von Kressenstein, pushed forward slowly and steadily, digging in repeatedly as they advanced, before seeming to halt 10 miles from Romani. This approach somewhat confused the British command which expected a direct assault on Romani, but was later attributed to the difficulty in bringing forward heavy guns in the deep sand (WO 157/706). Nonetheless, it was interpreted by the British as an attempt to block their own envisioned advance across the Sinai, so Murray ordered General Lawrence, in command of No. 3 Section of the Canal Defences, to prepare for offensive action on 13 August when it was noted ‘The moon will be favourable for an advance in the cool hours’ (WO 95/4364).

Anxious to get back at the enemy after the Katia fiasco, Balfour asked the Cabinet whether ‘there was any chance of our being able to give the Turks a drubbing’ (CAB 42/16/11). Rather than having to take the fight to them, the opportunity came to them at the beginning of the next month: on 4 of August 1916, Murray sent word to Robertson that ‘starting at midnight, 3-4 August, enemy advanced against our position in the neighbourhood of Romani with his full strength, estimated at 14,000 men’ (CAB 42/17/3).

In planning the defence, British command intended to use its abundance of mounted troops in the form of the Australian Light Horse, New Zealand Mounted Rifles and Yeomanry regiments to make the Ottomans pay heavily for every foot they gained before reaching their main defences. They would do this by creating a screen that slowed the enemy advance but constantly fell back towards a series of strongpoints. Once fully committed to attacking the main defences, they would use further mounted units to attack the enemy’s flank and rear. As well as the ground forces, the Royal Navy would position monitors off Mahamdiyah to shell the assembling Ottoman forces, all available aircraft would be concentrated in the zone and an armoured train was available in the siding at Kantara to support the western flank (WO 95/4429).

At 0011 on 4 August, the enemy finally moved forward from Katia to engage the line held by the 1st Australian Light Horse Brigade, south of Romani. Kressenstein’s forces then played directly into Murray’s and Lawrence’s hands, launching a series of ultimately fruitless frontal offensives on the main British position at Romani and allowing their own attempted flanking movement – and the bulk of their force – to be exhausted in the sand dunes and to fall to the well-handled mobile force of Yeomanry and ANZAC mounted units (WO 95/4429). 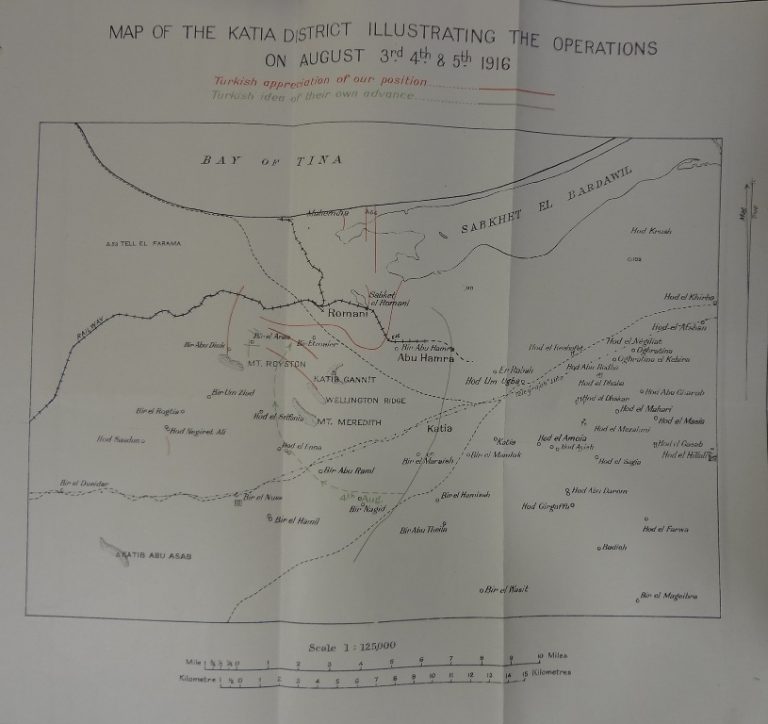 The fighting was over by the time darkness fell, with British command deciding that the now broken enemy would provide a better haul of prisoners with daylight rather than allowing them to scatter in the darkness. Indeed, the Ottoman rear guard did effectively hand itself to the advanced British forces with little resistance, revealing the main Ottoman force to be in full retreat. However, Kressenstein’s methodical advance had also allowed for an ordered retreat, which combined with the exhaustion of Murray’s mounted troops, meant that the roundly defeated Ottomans were able to fall back on El Arish (WO 95/4429).

On 18 August, Murray received a message of congratulations from the War Committee, commending ‘the complete success of his recent operations against the Turkish forces’ (CAB 42/17/3). The wider reaction to Romani, however, was somewhat mixed.

Mark Sykes noted that the impact of the battle was very uncertain. At the end of August, he wrote: ‘the Turks have evidently not been much demoralised by the losses they sustained in the reconnaissance at Romani’ (CAB 17/177).

The Intelligence section of the Indian Expeditionary Force stated that the 3rd Ottoman Division had been ‘nearly destroyed’ and seemed almost frightened by the number of prisoners of war (WO 157/790). According to the Director of Works of the Egyptian Expeditionary Force, prisoner of war camps in Egypt had to be extended ‘owing to the influx of some 3,000 additional prisoners after the action at Romani and Katia’ (WO 161/36).

Murray himself noted that the victory at Romani would not change the initial policy of a step-by-step advance across the Peninsula (WO 95/4365). Yet, the battle of Romani marked a turning point in the campaign.  From then on, Murray would always be on the offensive. He was determined to reach El Arish as quickly as possible, so much so that when he was asked to send some of his troops to the Hejaz to support the ongoing Arab Revolt, he replied fiercely: ‘I am one-third of the way there and I am determined to get to El Arish (…). Nothing will induce me to reduce the strength of troops required to carry on that plan’ (WO 158/602). 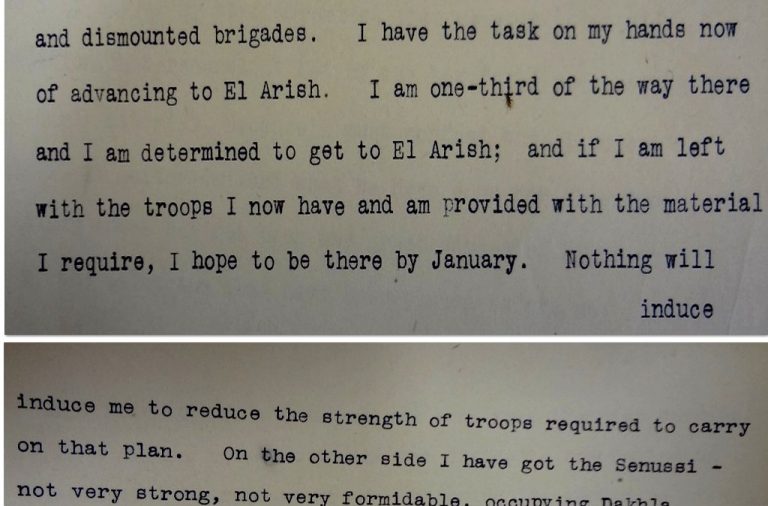 Murray’s declaration at the Conference to discuss the Hedjaz Question, 12 September 1916 (catalogue reference: WO 158/602)

El Arish, which had been evacuated by the Ottomans, was finally occupied on 21 December 1916; the EEF reached the border town of Rafah on 9 January 1917. The Egyptian campaign was over, the Palestine campaign could start. Murray, constantly asked to achieve more with fewer resources, was eventually replaced by Edmund Allenby in June 1917, two months after his second defeat in Gaza. Major-General Lynden-Bell noted: ‘Sir A[rchibald] M[urray] could have rested on his laurels after the campaign but his sense of loyalty to the Cabinet induced him to attempt an impossible job’ (CAB 45/78).