As we move inside, dazed and somewhat sun-struck from our amazing run of totally un-British weather, there is nothing like the prospect of a good solid historical drama to perk up our autumn nights. And this September promises something very special: Thackeray’s ‘Vanity Fair’. We will feast on seven episodes performed by a stellar cast. Thackeray, the narrator, is being played by Michael Palin and the very fanciable Tom Bales is lined up to play lovable cad Rawdon Crawley (move over Aidan Turner, I say…). Vanity Fair, the ‘novel without a hero’, is absorbing. No clear moral judgement here: the characters are all flawed mixes of good and bad – just like in real life.

I, for one, am looking forward to this Georgian autumn. You have a few weeks before the start, so why not get yourself into the mood by reading the novel? Or if you feel that would be too much of a spoiler, then there are lots of books about life in Georgian England which will give you context. Thackeray’s heroine, Becky Sharp, is clever, determined and ambitious. ‘What Regency Women Did For Us’ profiles 12 women from the period: philanthropists (so definitely not Becky), entrepreneurs, scientists and actresses. Women who stepped outside of the confines of their age and marked themselves as exceptional – women (like Becky) who had the gumption to take control of their destiny. Find out about the life of Harriot Mellon (sic) – an intelligent, pretty girl who had the misfortune to be born poor and illegitimate but who, by working her looks and beauty (remind you of Becky?), ended up married to elderly Thomas Coutts (yes that is Coutts Bank, the bank for the rich and the even richer). When he died, he left her his entire fortune, including his senior partnership at the bank – in which she maintained an active interest up to her death. Her second marriage was to The Duke of St Albans, 20 years her junior. Her story would have been Becky’s dream. 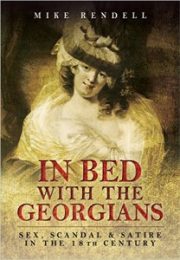 If you like that, then Mike Rendell’s ‘In Bed with the Georgians’ will also deliver. The title may be a bit outré, but besides dishing the dirt this book also provides an insight into an age of celebrity illuminated by the vicious satirical caricatures of Cruikshank and Gillray. Again, there are profiles of individuals who could so easily have served as inspiration for Thackeray. Mary Elizabeth Bowes was a rich heiress who had a relationship with the wealthy George Gray (think Joseph Sedley in Vanity Fair) but resisted pressure to marry him – only to be duped by a handsome Ango-Irish adventurer who proceeded to spend her money, beat her and expect her to sit down to dinner with a succession of his mistresses. When, goaded beyond endurance, she began divorce proceedings he had her kidnapped and tortured. He was tried and imprisoned but public sympathy did not, as a modern reader might expect, go out to Mary, who lived out her life in eccentric isolation in a house full of dogs. Clearly this was a happy ending of sorts for her, but an indication to us that we have come a long way (albeit perhaps not far enough) in social attitudes towards women.

Another cautionary fable illustrating the pitfalls which awaited well-born women is the real life story of heiress Catherine Tylney Long, set out in ‘The Angel and The Cad’. At 16, Catherine had everything: she was beautiful, good-natured and absolutely loaded. She was the catch of the day, besieged by admirers including the Duke of Clarence. (He was later to become William IV: had she picked him she could have ended up queen, although as ‘Sailor King’, Clarence was also fat, had learned his manners on the quarterdeck and was encumbered with a mistress of 20 years and no fewer than ten little fitzClarences – so resistance may not have been as hard as you might think). Marrying for love, she picked William Wellersley-Pole (yes that name was a gift to the caricaturists, who did not hold back), nephew to the Duke of Wellington: tall, dark, handsome and totally unreliable. It didn’t end well.

Although the majority of Vanity Fair is played out in the drawing room, the most significant events of the age loom large. The Battle of Waterloo is a testing ground for many characters, who are either found wanting or else reveal their inner strength. Two books which will give you a good feel for life at this time are ‘Dancing Into Battle’ by Nick Foulkes and Jenny Uglow’s ‘In These Times’. Both writers are eminently readable social historians, adept at conveying the spirit of the age. For a more military view, look to Roger Kershaw’s ‘24 Hours At Waterloo’.

Or, if your tastes run more to fiction rather than fact, then Georgette Heyer’s ‘An Infamous Army’ is a classic (I’m sorry about the cover – but trust me, here it is very much a case of do not judge, etc). Heyer’s research and grasp of period speech is meticulous and the military detail is considered so accurate that the text is included on the syllabus at Sandhurst. And you cannot go wrong with Heyer: I am a devoted fan. Introduced to her work by my mother, I have read everything she ever wrote (even the detective fiction). It is one of my life’s greatest disappointments that I never ended up clutched to the bosom of a tall dark and handsome man who owned half of Sussex – oh, that life would mirror fiction.