My last blog focused on James Hawkins, a thief so determined not to be separated from his wife and family that he twice returned from the other side of the world and continued to evade his sentence for several years. While cataloguing the criminal petitions for mercy in HO 17 it is very hard not to feel sympathy for men like Hawkins, whose punishments appear so disproportionate to us now. However, as I try to remind myself, the petitions were written to elicit sympathy and there are two sides to every story.

One case which recently piqued my interest was that of George Sanglier, the master of Lambeth Workhouse. 1 Sanglier was convicted at the Central Criminal Court in November 1838 and sentenced to seven years’ transportation for embezzling money, the property of the guardians of the Lambeth Poor Law Union. The National Archives holds correspondence between Poor Law Unions, who were responsible for administering the Poor Law at a local level, and the central Poor Law Commission in record series MH 12. 2 Here was an opportunity to find out how Sanglier’s side of the story in his petitions compared with what his prosecutors, the Guardians at Lambeth, reported to their superiors.

There are seven petitions on Sanglier’s behalf and they provide a lengthy explanation of his dealings with Lambeth Poor Law Union. Sanglier was appointed as workhouse master early in 1838. The workhouse master was responsible for the running of the workhouse; his duties included managing its estate and accounts, overseeing male paupers and ensuring that sick or dying inmates were dealt with appropriately. The parish of St Mary’s Lambeth was just coming under the operation of the Poor Law Amendment Act of 1834 and as master Sanglier faced numerous challenges, which he described in his petitions:

Detail from one of Sanglier’s petitions reporting his difficult job at Lambeth (catalogue reference: HO 17/56/119)

Things seemed to go smoothly at first but in October ‘unfortunately some differences arose’. Sanglier suggests that the Guardians were divided among themselves and in particular ‘two of its members from that time continued to annoy and vex me by every frivolous means’. Rather glossing over the details, his petitions report that by October 1838 ‘affairs stood in such a position’ that he was compelled to resign. He claims he was given only three days to pack up all his furniture, clothes and belongings and prepare his final accounts. Before leaving, the two guardians who had ‘annoyed and vexed’ Sanglier so much carried out a close inspection of his packing. In the ‘hurry and confusion’ Mrs Sanglier and her servant had taken two old workhouse shirts and a towel, clearly marked as workhouse property. Sanglier suggests that ‘to men who were inclined to give vent to spleen or ill feeling an opportunity had, they thought, occurred by which they might display their malice’ and Sanglier and his wife were reported to the local magistrates. This original charge of theft was abandoned, however, when a more serious charge of embezzlement was made. Unfortunately for George, in ‘the hurry of business’, he had omitted to give credit for three sums of money in his accounts.

Sanglier’s petitions paint a picture of a man who made an honest mistake and was framed by conspiring colleagues who disagreed with his implementation of government legislation. He outlines his career of public service in the army and in local government. Like many workhouse masters he had seen military service – serving as a colour sergeant in 2nd Battalion of the 60th Regiment for seven years – and had previously served as master of the workhouse at Tynemouth, Northumberland. Among his petitions are character references from former employers testifying to his honesty and good character. Indeed, a petition from November 1840 suggests that his gaolers on the convict hulk Leviathan trusted him enough to employ him as a clerk: 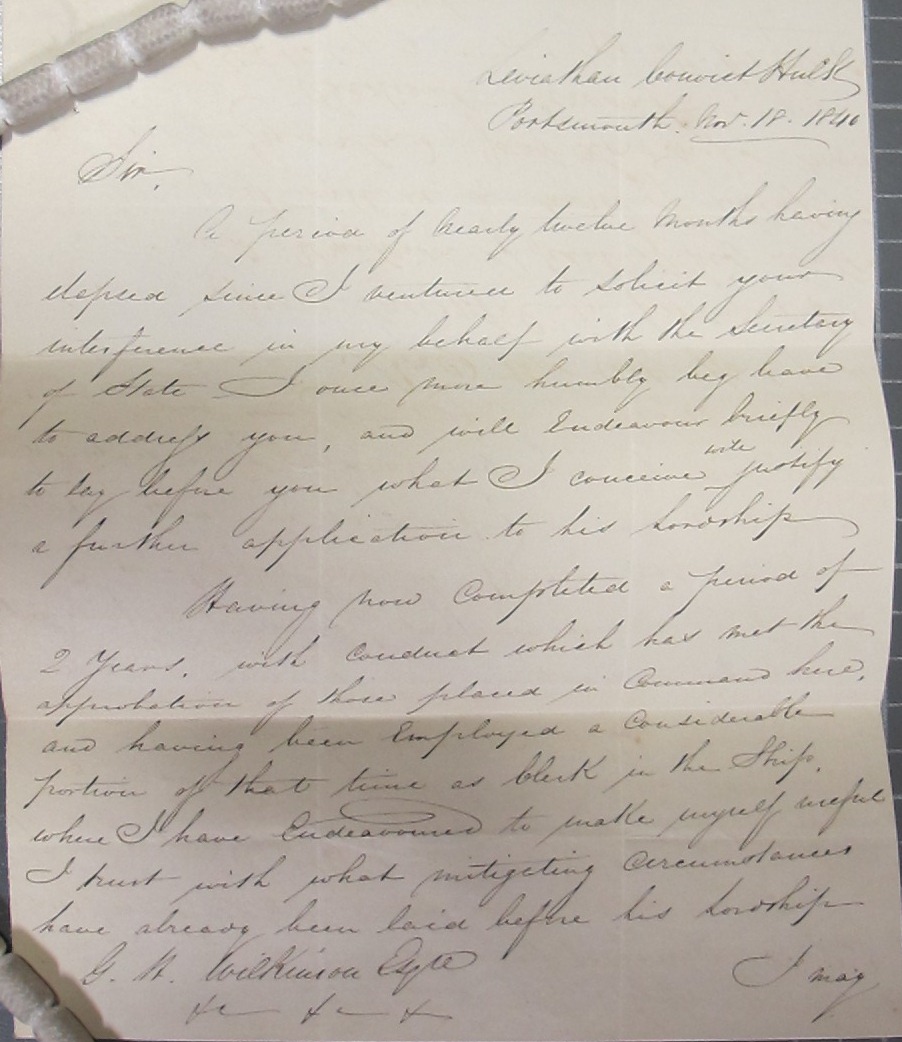 Sanglier’s petition describing his work as a clerk on board the convict hulk (catalogue reference: HO 17/56/119) 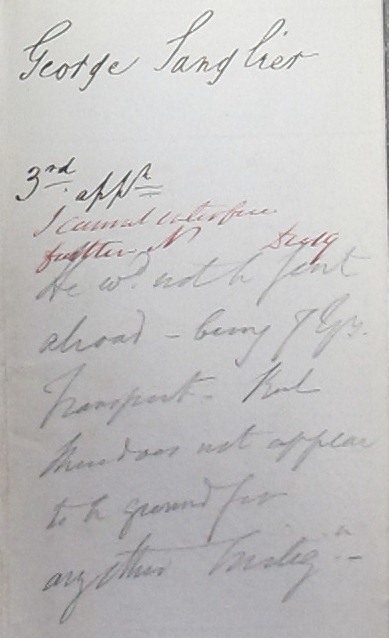 Sanglier’s hopes for an early release appear to have been ill-founded. An annotation to a petition of December 1839 records the Home Office verdict that ‘He would not be sent abroad, being 7 years transport. But there does not appear to be ground for any other mitigation.’

Correspondence in the Poor Law Commission archive in MH 12 certainly confirms George’s claims of a rift with his employers at Lambeth. In a letter to the Commission on 10 October 1838 the Lambeth Guardians reported that they had suspended Sanglier and his wife ‘in consequence of repeated acts of drunkenness on the part of Mr Sanglier… and inattention on the part of Mrs Sanglier the matron’. 3  Pressed for evidence by the Commission they report ‘ocular evidence’ of his drunkenness on several occasions and that Sanglier had appeared at a meeting ‘in a state of intoxication’. Sanglier was immediately dismissed and Mrs Sanglier’s resignation suggested. In a letter of his own Sanglier claims that these allegations were motivated by ill-feeling from some of the guardians:

‘I am not aware that any Act or Acts of mine call for this unjust proceeding, and I cannot attribute it to any other cause than my attempting to carry into effect the measures contemplated by the New Poor Law Act, and which may be and is obnoxious some of the parties.’

The correspondence between Sanglier’s former employers at Tynemouth Poor Law Union and the Poor Law Commission has been catalogued as part of a volunteer cataloguing project called ‘Living the Poor Life’ and provides further background on Sanglier’s character and role as workhouse master. 4 Searching  Discovery, our catalogue, using the keyword ‘sanglier’ reveals an entry relating to an enquiry into allegations against him from an elderly pauper. 5 The papers of the enquiry by the Tynemouth guardians give a flavour of life in the workhouse and of the relationship between workhouse master and inmate. Witness statements reveal that Isabella Marshall, an 83 year old inmate, had had a disagreement with some of her fellow inmates and as the situation grew more heated, Sanglier intervened. Marshall’s statement makes upsetting reading:

‘the Governor then put on me a canvas Dress which pinioned my Arms – and fastened my feet to the Bed – kept me there so long that I was obliged to make water as I lay – and kept me in that state until the next day. When I tried myself to get up he took hold of me by the arm to force me down and struck me on the Bottom several times.’ 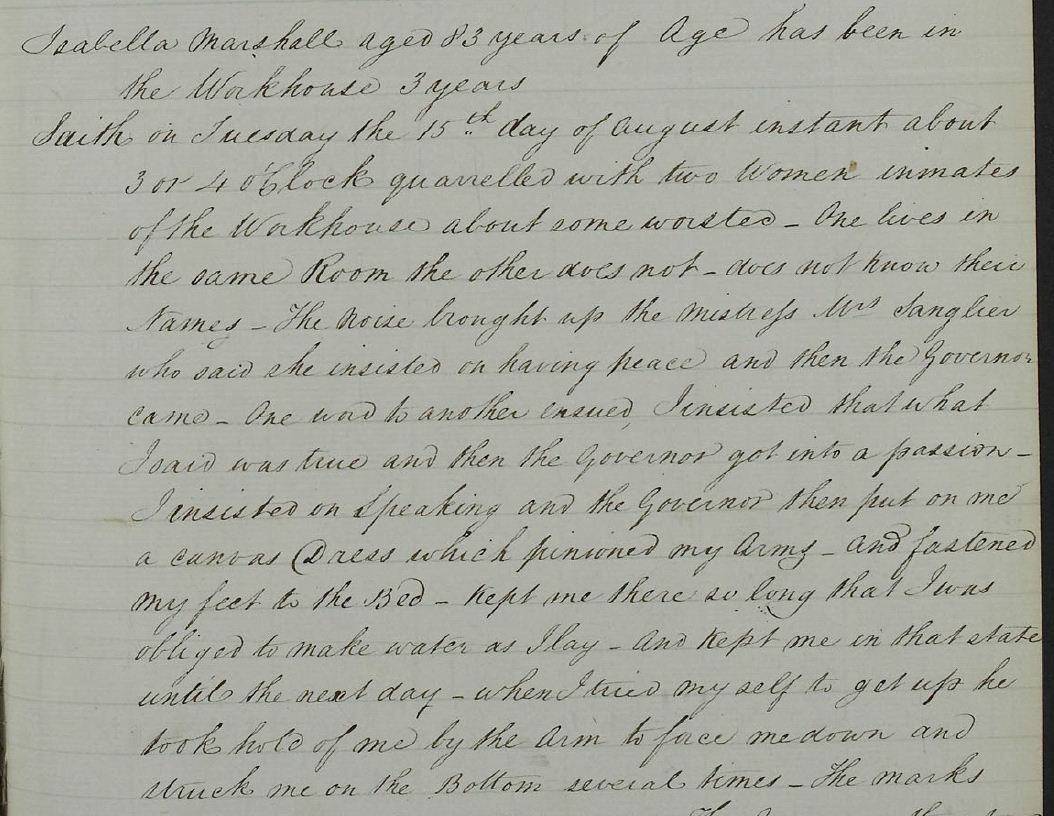 Statements from other workhouse inmates and a number of workhouse officials confirm the use of a straightjacket to restrain Isabella but express sympathy for Sanglier’s actions against the ‘unquiet and unmanageable’ pauper who was ‘in a state of violent mental derangement’. The enquiry of 1837 exonerated Sanglier, concluding that ‘the Conduct of the Governor has been strictly humane and justifiable, and meets fully with the approbation of the Committee’. This support is in stark contrast to his relationship with the officials at Lambeth and Sanglier must have remained confident of their approval because in March 1841 he wrote to his former employers at Tynemouth asking them to petition on his behalf. 6

Comparing Sanglier’s petitions in HO 17 and related Poor Law correspondence in MH 12 has been a thought-provoking exercise. I set out hoping to find a balance to Sanglier’s rather inevitable claims of innocence in his petitions. In uncovering more about Sanglier’s disagreements with the Lambeth Guardians and the enquiry into Isabella Marshall’s allegations, this ‘other side of the story’ illustrates some of the many inequalities of 19th century life – in George’s dependence on the goodwill of his employers and in his own dealings with paupers like Marshall.  When working with the petitions we are aware that their authors will (by and large) try to paint a convict in the best possible light, so perhaps it is inevitable that even when the surviving government archive provides us with more information about the crime and the convict’s previous life, questions remain as to what really happened and whose version of events is most reliable.