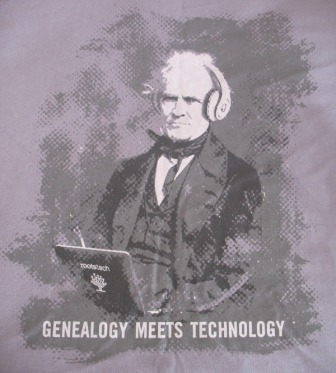 I can’t think of a more appropriate subject for my first blog post than technology and genealogy. I recently returned from two weeks in Salt Lake City, during which time I attended the second annual Rootstech conference, a major event bringing together genealogists and the developers who design the sites, software and gadgets to which we have become addicted. Last year Rootstech attracted over 3000 attendees, and this year there were about 4500.

The keynote speakers were introduced as though they were rock stars or sports stars, accompanied by loud music and fancy lighting effects. As befits a technology event the three keynote sessions were streamed live online, and people in the hall were comparing notes with virtual attendees all over the world, via Twitter and Facebook. Following the #Rootstech hashtag, I spotted comments in at least four languages other than English. These sessions and a number of others were also recorded, and are available on the Rootstech website. I can particularly recommend Josh Coates on ‘Exabyte Social Clouds and Other Monstrosities’, which was quite a performance.

For the duration of the conference there were about a dozen sessions at any given time. Some were for developers, some for users, and others were aimed at both. Blogging and other kinds of social networking were high on the agenda, and I took part in an international panel discussion on the use of social networking in genealogy, with bloggers from Australia and the USA. As far as I am aware I was the only British presenter outside of the contingent from the brightsolid group of companies.

But for all of the high-profile content of the conference sessions, the centre of the action was the Expo Hall. As you’d expect, the major commercial and non-profit players in the world of genealogy were there, including Ancestry, FamilySearch and brightsolid; at the other end of the scale there were small companies offering a single product or service, like portable scanners or QR codes for gravestones. The centre of the hall was the media hub where a number of Official Bloggers were based, reporting on the event to their followers. There were two glass cubicles for recording audio or video interviews which were in almost constant use, and the results are now on a variety of blogs, podcasts and the like.

The Media Hub wasn’t the only unique feature of the hall, though; there was a small demo area where vendors and developers could demonstrate their products and services, some soft seating areas where you could just sit and chat, and then there was the Microsoft playground. There you could play actual games like table tennis, or get a neck massage. Good for the creative process, apparently.

Amid the buzz and the excitement I didn’t get to as many sessions as I would have liked, but the contacts that you make and the things you learn outside the official sessions can be just as valuable. You can record and live-stream lots of things, but you can’t reproduce the kind of social networking that happens face to face. It was a conference with an emphasis on technology, that’s for sure, but it just goes to show that technology needn’t replace the human and personal element, it can enhance it too.