Home > Blog > From Pinewood with Love

From Pinewood with Love

There are certain films that I’ve always associated with my youth – films that remind me of being at home and watching with the family. Now that I think about it, some of these films were not actually very good. Today I dread the thought of the hills being alive with the sound of music – that’s definitely one Christmas film to be avoided!

One film, however, that I always enjoyed was ‘Bedknobs and Broomsticks’. Yes it was daft, and probably no better than Julie Andrews and company dancing over the Alps. Another film I liked featured a wonderfully bright flying car. So what a pleasant surprise when a colleague showed me a file from 1967-68 entitled ‘United Artists Corporation Ltd, Chitty Chitty Bang Bang’. It starred a childhood favourite of mine, Dick van Dyke, and even had Benny Hill playing the role of the toy maker. But why would the Board of Trade have a file, BT 64/5341, on an apparently American movie called ‘Chitty Chitty Bang Bang’? 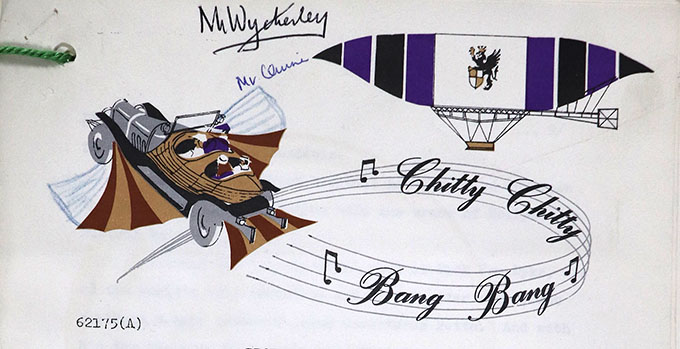 Founded in 1919, United Artists was an American film and television entertainment studio. It produced ‘Chitty Chitty Bang Bang’, an adaptation of Ian Fleming’s novel, with Eon Productions, a London-based company. The film was produced by a British resident, Albert R Broccoli, with a British associate producer, Stanley Sopel. The two of them had already worked on various films together. Two scriptwriters are listed – a clerk has happily written ‘Benny!’ in red after B. Hill, while ignoring the more prestigious scriptwriter, Roald Dahl.

The benefits of registering British

Filmed in locations across England, Scotland and Europe, ‘Chitty Chitty Bang Bang’ was filmed mainly just outside London at Pinewood Studios. During the 1960s (as it still is today), Pinewood was a major television and film centre, producing a string of hit British films, using mainly British casts and crews, satisfying the criteria for a film to be registered as a British film.

Being registered as a British film brought certain benefits: you could apply for tax relief, and you also had access to loans to help with production and distribution costs. British cinemas were also legally obliged to guarantee that a percentage of first and second films screened were British films 1, thus guaranteeing a greater turnover for British films than for ‘foreign’ films.

The file on ‘Chitty Chitty Bang Bang’ relates to the application for its classification as a British film. The application includes a full list of production team, crew and actors and actresses. The information for each person details their British status and residence, and the fee paid for their work. The producer, Albert Broccoli, is listed as earning £137,000 and associate producer, Stanley Sopel, is listed as earning £10,400. Roald Dahl, scriptwriter, received £57,393. The other scriptwriter, Benny Hill, who also starred in the film as the toy maker, received £24,300: £19,300 for his acting and £5,000 for the script writing. The director was Ken Hughes, and he was paid the sum of £91,826. The composers Robert and Richard Sherman, residents in California, were paid £32,143.

The film’s star actor was Dick van Dyke (better known for an awful Cockney accent in ‘Mary Poppins’), playing the role of Caractacus Pott. He was paid £615,425, highlighting the disparity in wages between men and women. Sally Ann Howes, a resident in California with dual nationality, played the lead female role, Truly Scrumptious, and was paid just £44,939. The two children were paid £4,175 (Heather Ripley), and £3,850 (Adrian Hall, who also starred in ‘A Christmas Carol’ with Albert Finney). The total cost of the film was in excess of £3 million, not a cheap film for the 1960s.

The 1960s and the rise of British cinema

Other films to come out of Pinewood around this time included the ‘Doctor’ series, ‘Genevieve’ starring Kenneth More, and the ‘Carry On’ films. Pinewood’s importance went hand-in-hand with the rise in the popularity of British-made films. As well as the ‘Carry On’ franchise (which began with ‘Carry On Sergeant’ in 1958), there were the horror movies, such as ‘Brides of Dracula’ (1960), produced by Hammer Film Productions.

The 1960s saw the emergence of the British secret agent, John Steed (played by Patrick Macnee), in ‘The Avengers’. With his umbrella, racing green Bentley cars, and of course the female assistant, namely Tara King, John Steed might appear to be the quintessential British secret agent. But it is James Bond, 007, who is without doubt the iconic British secret agent. Five years before they had adapted Ian Fleming’s novel for ‘Chitty Chitty Bang Bang’, Albert Broccoli and Stanley Sopel produced Sean Connery’s second licence to kill adventure, ‘From Russia with Love’ (1963). (The Broccoli family have been involved in all the James Bond films bar one, the original ‘Casino Royale’ with David Niven).

There are similarities and differences between Steed and Bond: both drove a Bentley (this was before Bond drove an Aston Martin), and Honor Blackman, who played Steed’s assistant, Dr Cathy Gale, would appear as a ‘Bond girl’ in ‘Goldfinger’ in 1964. Rather than an umbrella, Bond was usually found holding a martini, and his trademark companion took the form of Tatiana Romanova. (A few years later, in ‘A View to a Kill’ in 1985, Patrick Macnee pops up to assist Bond as Sir Godfrey Tibbett, but this time driving a Rolls Royce Silver Cloud II). 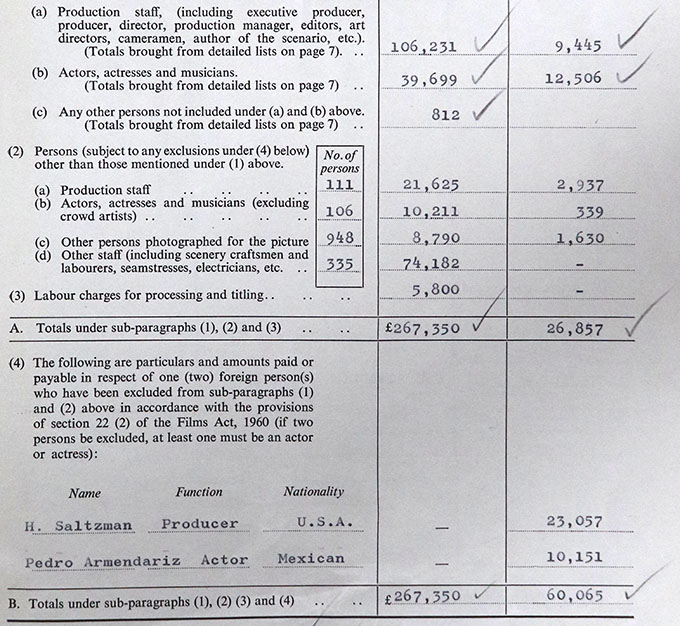 The amounts paid for From Russia with Love. Catalogue ref: BT 64

The National Archives holds a file in BT 64/5262, applying for the registration of ‘From Russia with Love’ as British. What you notice by looking in the BT 64 files is the difference in the costs between Broccoli and Sopel’s films. In 1968 ‘Chitty Chitty Bang Bang’ cost in excess of £3 million, whereas James Bond’s ‘From Russia with Love’, four years earlier in 1963, cost a little over £320,000. Len Deighton was paid just £1,500 as one of the scriptwriters – much less than the payments received by the ‘Chitty Chitty Bang Bang’ scriptwriters. In stark contrast to Dick van Dyke’s fee, Sean Connery was paid £24,325 for his latest 007 stint. Daniela Bianchi was paid just £5,949 to be the ‘Bond girl’, Tatiana Romanova; while Lotte Lenya, who played the Russian villain Rosa Klebb, was paid £6,557.