Friendly aliens in our fighting forces

In October 1917 Russia withdrew from the First World War. One consequence of this withdrawal that you may not be aware of is that Russian nationals living in Britain suddenly became eligible to serve in the British Army.

Throughout 1915 there had been what was referred to as the ‘Conscription Crisis’. Too few men were enlisting in the forces to meet the needs of the industrial, mechanical nature of the First World War. In January of 1916 conscription was brought into force to meet the demand for men.

On 14 April 1916 the Home Secretary, Herbert Samuel, sought an amendment to Section 95 of the Army Act which imposed limitations on the enlistment of foreigners into the Army. He was hoping to encourage more aliens to join the British forces, or at least the territorial force. It was decided that foreign nationals who wished to join the British forces could do so as long as no more than 2% of the fighting force was made up of aliens. 1

The exception to this rule related to nationals of Allied countries. There was an agreement in place that all French, Belgian and Russian subjects living in the UK who desired to fight in the War should be compelled to return to their own country to join their respective armies. Since Russia was no longer a belligerent after October 1917 the government felt that this agreement no longer applied. Mr Samuel especially considered it unfair that Russian shopkeepers should remain exempt from service, profiting from the absence of British shopkeepers who were serving in the Army.

At this time, aliens living in the UK already had to register their personal details with the police as a consequence of the 1914 Aliens Registration Act, a process which was threatening to overwhelm the resources of an already stretched police force. It was decided that any alien who enlisted to serve in the forces and who ‘render good service in the British Army’ would be excused from paying the fee for naturalisation, effectively ‘fast tracking’ their application for naturalisation and offering an incentive to those thinking of joining up.

Where this information becomes useful is that each of these military men who became naturalised has a case file here at The National Archives. These case files (in record series HO 144, searchable by name via Discovery, our catalogue) will give you detail of their individual service. An example is Samuel Ostroi (whose medal roll entry is above) 2.

He has no service record surviving 3, however his naturalisation case file tells us his regiment, 8th Battalion, Labour Corps, and dates of service, 18 April 1918 until a medical discharge on 19 November 1919. 4

Of course, as much as Russian nationals were obliged to serve under the Military Service Act, they were equally entitled to appeal their conscription. The records of the Middlesex Appeals tribunal in record series MH 47 contain a great many records of Russian subjects who had either refused to return to Russia therefore forfeiting any right to protection from conscription or those who had commercial, familial or business obligations which would necessitate an exemption from service. We are currently digitising these files ready for release on our website later this year. The case papers provide a great deal of information about these men, their businesses and their families.

An example of a Russian attempting to gain an exemption is Adolphe Feitelson from Kovna (Kaunas, Lithuania) who was claiming exemption on business grounds, ill health and that he was supporting a wife and young child, his mother and two sisters. 5 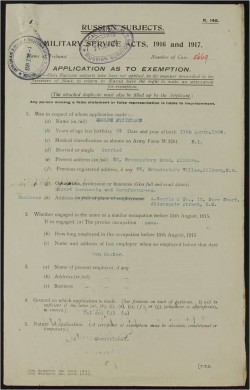 Application paper to be filled out by Russian subjects.

His application was refused and Adolphe was only granted a temporary exemption until 28 February 1918. Looking online, again there is no indication of service – not even a medal record in this instance. In an effort to discover whether or not Adolphe saw any service we can examine his naturalisation case file for details. 6 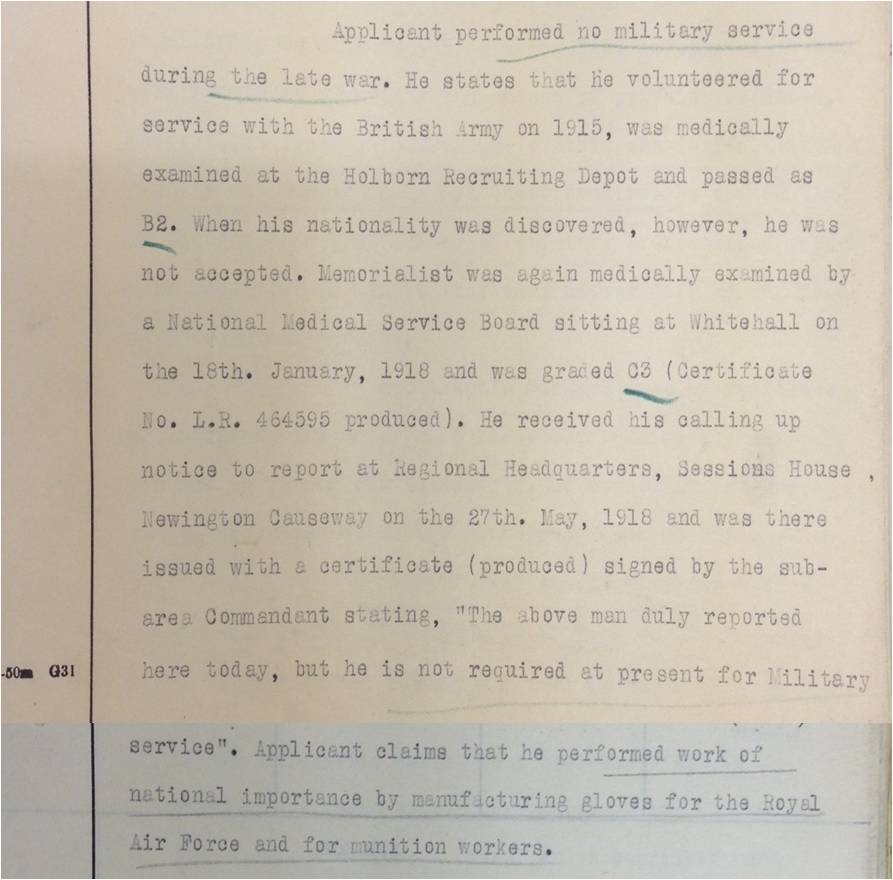 This file explains that Adolphe presented himself for service but was not required. Instead, he saw out his time undertaking work of national importance manufacturing gloves to be used by members of the Air Force and workers in the munitions industry.

Other examples of Russian men who appealed conscription and who also have naturalisation records include Richard Raphael, 7 a tobacconist who, we learn from his case file, also saw out the war undertaking work of national importance with Waring & Gillow assembling aircraft. A further example is Woolf Okin who claimed, as a boot maker, to be in a reserved occupation 8. Mr Okin also suffered from ill health and had four children which resulted in receiving a rolling temporary exemption, the last of which was due to expire on 27 December 1918. 9