‘…that you are a Friendless poore child’

The Royal Hospital School was founded in 1712 as part of the Royal Hospital at Greenwich. Its purpose was to provide an education for the sons and daughters of men who served in the Royal Navy, Royal Marines, the merchant service or related occupations. The children concerned were often orphaned, or at least fatherless, but many still had both parents living. To be admitted to the school the child had to be within the acceptable age range, be able to read, and be in a good state of health. They also had to be deemed to be suitable ‘objects of charity’ on the grounds of their poverty, and the parents or guardians had to provide documentary evidence to support their applications.

As a result, the admission papers in record series ADM 73 include many examples of documents and certificates that were sent in, but evidently not returned. There are birth and baptism certificates for the children, their parents’ marriage certificates, affidavits from clergy as to the poverty of the family, records of the father’s service and sometimes letters pleading a child’s case for admission. Where two or more children from the same family were presented for admission, it is often possible to build up quite a detailed picture of the family from the details in these papers, especially the letters. These often describe heartrending situations, such as young widows left with several small children, or grandmothers begging for their orphaned grandchildren to be admitted because they do not have the means to look after them. 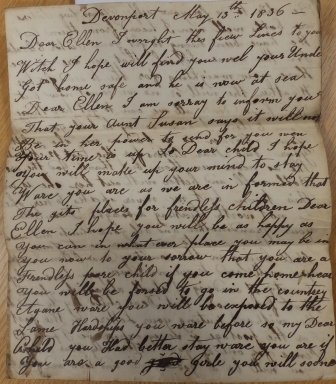 Letter to Ellen Johnson from her aunt in 1836

Indexing the contents of these files is fascinating, because you never know what is going to be inside the next bundle that you unwrap. I had just transcribed the details for Elizabeth Johnson’s application, which gave the usual details of her birth and her parents’ marriage, and the fact that she had two sisters, Mary Ann and Ellen. Then there was an additional note that her father, Thomas, died in service, drowned from HMS Ariadne, and her mother, also Elizabeth, had absconded. The very next bundle contained her elder sister Ellen’s application in 1832, including a letter from the mother, describing her desperate circumstances. Sad though it was, there was nothing to distinguish this unfortunate family from many others.

But there was another letter. I have seen lots of letters among these applications, but they are always to or from the Greenwich authorities. This one has no reason to be there at all, because it is a personal letter to young Ellen, now a pupil at the school, from her aunt.  Aunt Tamzin’s handwriting is clear and legible, but the spelling and grammar has a style all of its own! I have copied it exactly as she wrote it, complete with capital letters, line spacing and (total lack of) punctuation.

Dear Ellen I wright this few lines to you

Witch I hope will find you wel your Uncle

Got home safe and he is now at sea

Dear Ellen I am sorray to inform you

That your Aunt Susan says it will not

Be in her power to send for you wen

Your time is up So Dear child I hope

You will make up your mind to stay

Ware you are as we are in formed that

Ellen I hope you will be as happy as

You can in what ever place you may be in

You now to your sorrow that you are a

You will be forsed to go in the countrey

Agane ware you will be exposed to the

Same Hardships you ware before so my Dear

Child you Had better stay ware you are if

You are a good girle you will soone

Be able to do for your selfe Your two Sisters

are both well wen I heard from them last

In the same School that you are in we

Hare now weighting for the to send for her

Weather the will or no we do not now but

We have done all we can to git her thare

Dear Ellen I ham sorrey to tell you that

Your Mother is as bad as ever she as left

Your two Dear Sisters for the last 12 months

She as never seen them but thank God the are

Both well and better With out her she is in

This town but we niver spakes to her she

Is not worth thinking abought  Dear Ellen

your Grandmother and all your Aunts and cousins

Gives thare love to you your aunt Jane is

Still living in the countrey Dear Ellen I hope

you will send to me wen ever you have an hoper

Tunity of sending I shall always be glad to

Hear from you but Dear child try to Send to

For the postage is verrey expensive I paid 13

Pence for one of your letters My dear I hope

you will be a good girle and love and fear God

And you will find him the best of all parents

For he as promessed to be a Father to the Fath

erless and a friend to all who puts thare trust in

him may the Grace of God fllow you ware ever

You are and direct and blest you in every thing

So to conclude with my blsing and prayers for

your wellfare and prosperity I remain your

I would love to know what happened to young Ellen and her sisters. And was Elizabeth senior really a dreadful, neglectful mother? Or was she simply so overcome with grief and despair that she had what we might now recognise as a nervous breakdown? Sadly, with such common Christian names and the surname Johnson (or Johnston, or Johnstone) finding out would be no easy task.