‘The most formidable document’

‘The most formidable document I have ever seen addressed by one state to another that was independent’ (FO 371/2158, f. 97). This was how the British Foreign Secretary, Sir Edward Grey, described the ultimatum issued by Austria to Serbia on 23 July 1914. This document, perhaps more than any other, set Europe on course for war in 1914. It laid out a series of Austrian demands of Serbia, and gave them only 48 hours to respond. The countdown to war had started. The questions remain, how did it come to this, and why did it matter to Britain?

How did it come to this?

In Britain, as across Europe, the assassination of Arch-Duke Franz Ferdinand provoked shock and indignation, but this was not the first time terrorists had assassinated European royalty so why was this event so important? The incident rapidly turned into a crisis because it reflected tensions between Serbia and Austria-Hungary in the Balkans. In an ethnically diverse region both countries staked claims on territory based on conflicted demographic and historical precedents. In addition  the growth of Serbian nationalism had been seen as a threat by the government in Vienna as it undermined the ties which held the diverse nationalities of the Austro-Hungarian Empire together. As the British Ambassador reported, some in the Austro-Hungarian Government felt that the country would ‘lose its position as a Great Power if it does not once and for all make it clear at Belgrade that Servian provocation will no longer be tolerated.’ (at this time the spelling Serbia and Servia were interchangeable)(FO 438/1 No. 9). All of the European powers expected an Austrian response, the question was: what form would it take?

Why did it matter to Britain?

From the moment Arch-Duke Franz Ferdinand was assassinated a crisis in the Balkans was inevitable, but why did it matter to Britain? Britain had no particular interests in the Balkans and few in the British Government had much sympathy for either the Serbs or the Austrians in regard to their rival intentions in south east Europe.  Despite this the British were concerned about these events and the reason for this lay in the network of alliances connecting the powers together. Serbia had the support of Russia, whilst the Germans stood behind their Austrian allies. The prospect of this crisis spiralling into a full blown European war was very real and something that the British Government were only too aware of. Sir Edward Grey wrote on 20 July ‘I hate the idea of a war between any of the Great Powers, and that any of them should be dragged into a war by Servia would be detestable’ (FO 438/1, no. 15).

The importance of the events in Sarajevo were immediately realised in London. Sir Edward Grey expressed his sympathy to the Austrian ambassador. He added that he felt for the Arch-Duke’s uncle, Emperor Franz Joseph, stating that ‘his life is so bound up with the peace of Europe that I dread anything that must try his strength’ (FO 800/41 f. 322). At the same time the British ambassador in Vienna reported that public opinion in Austria was running high and that Serbia was being blamed for the Arch-Duke’s assassination. The British Foreign Office, however, remained hopeful that this popular outburst would be isolated and would not affect the policy of the Austrian Government.

So what was Britain’s role? Over the course of the previous decade Britain had become entwined in European power politics for the first time in a century. Britain had signed colonial agreements with France in 1904 and Russia in 1907 which facilitated closer ties in European affairs. It is, however, a misconception to state that Britain was part of a formal alliance in this regard; she was not obliged to play any part in a European war if one broke out.

The British Foreign Office therefore tried to adopt the position of a mediator, limiting the scope of the crisis wherever possible. In particular Sir Edward Grey sought to do all he could to ‘encourage patience in St Petersburg’ (FO 438/1 No. 3). Britain, both directly and through her close relations with France, felt she had considerable influence in the Russian capital and tried to use this to stop the Russians from taking any aggressive steps. At the same time the Foreign Office was attempting to get the Germans to restrain their Austrian allies from making any great demands of Serbia. In an effort to de-escalate the crisis the British were trying to get both sides to give a little ground and allow time for clear heads to prevail.

From the moment the two bullets were fired in Sarajevo on 28 June it was clear that relations between Austria-Hungary and Serbia were in crisis. The question was, what would Austria’s next step be? Vienna kept everyone waiting for over three weeks, and although it was known that ‘a kind of indictment [was] being prepared against the Servian Government for alleged complicity in the conspiracy that led to [the] assassination of the Archduke’, no one knew what form it would take (FO 371/2158 f. 13). The views of the British ambassador in Vienna, Sir Maurice de Bunsen, alternated from accepting that ‘the Austro-Hungarian Government are in no mood for parley’ on 16 July to the private exclamation that ‘I cannot believe Austria will resort to extreme measures’, made the following day (FO 371/2158 f. 13 , FO 800/375, f. 115). When the Austrian Ultimatum was finally delivered on the evening of 23 July it confirmed all of de Bunsen’s fears. It made extraordinary demands on Serbia, including changing school curriculums and allowing Austrian police to operate on Serbian territory. 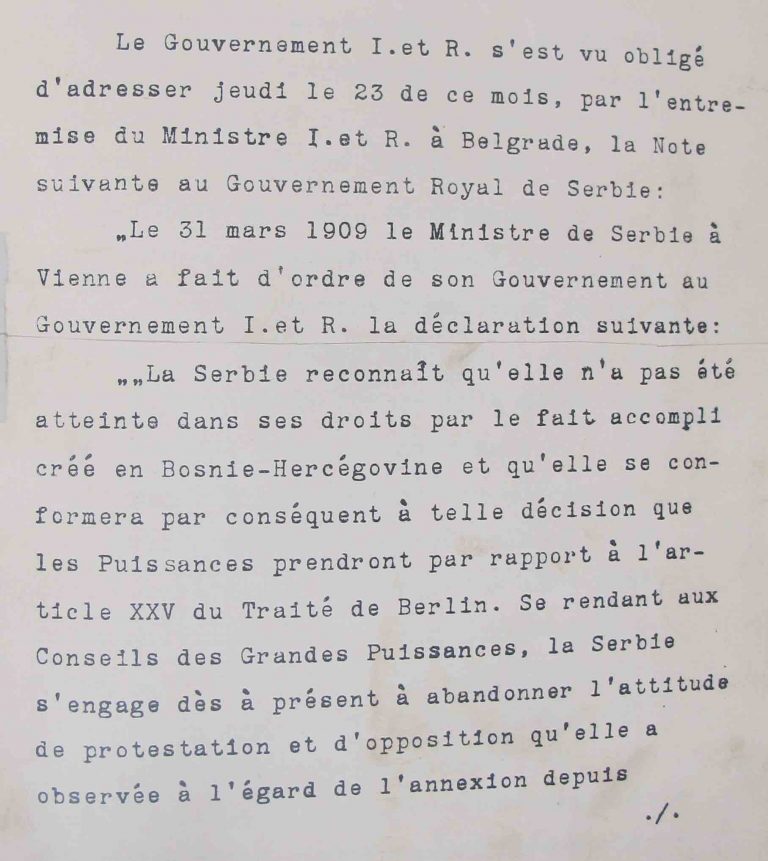 As Sir Edward Grey acknowledged, these were not demands any state could reasonably accept. The British Prime Minister, H H Asquith, described the ultimatum to the King as ‘the gravest event for many years past in European politics’ (CAB 41/35/20). Europe had taken another step on the descent into war.