Food for thought? Rationing and the Second World War

What did you eat for lunch today? Cheese sandwiches? Sushi, salad, chips? Have you ever given any thought as to what your food reveals about society in 2016?

Perhaps that wilted spinach you put in the bin earlier reveals more than just your absent-mindedness; instead it might represent our fast-paced, throw-away culture. Maybe your mid-morning kale smoothie is not only a tasty beverage but also in fact evidence of a modern fascination with #cleaneating and the market power of Instagrammable foodstuffs.

Food reveals much about the society in which it is consumed, so for an historian, bringing food into focus is a useful way of exploring social change. No time is this more evident than in the Second World War and its aftermath. What, then, does an examination of food during this period reveal about society? As an example, let’s look at what it tells us about women and class in 1940s Britain.

While women arguably experienced a ‘social revolution’ during the Second World War with more opportunities in work and leisure, women – as expected, particularly given the absence of many men – remained the heads of the ‘Kitchen Front’. In fact rationing, beginning in January 1940 with bacon, butter and sugar, made the lives of women even more difficult, largely as they had queue longer and feed the family on less food. This often meant, in reality, a more creative approach in what they served to avoid too much monotony. 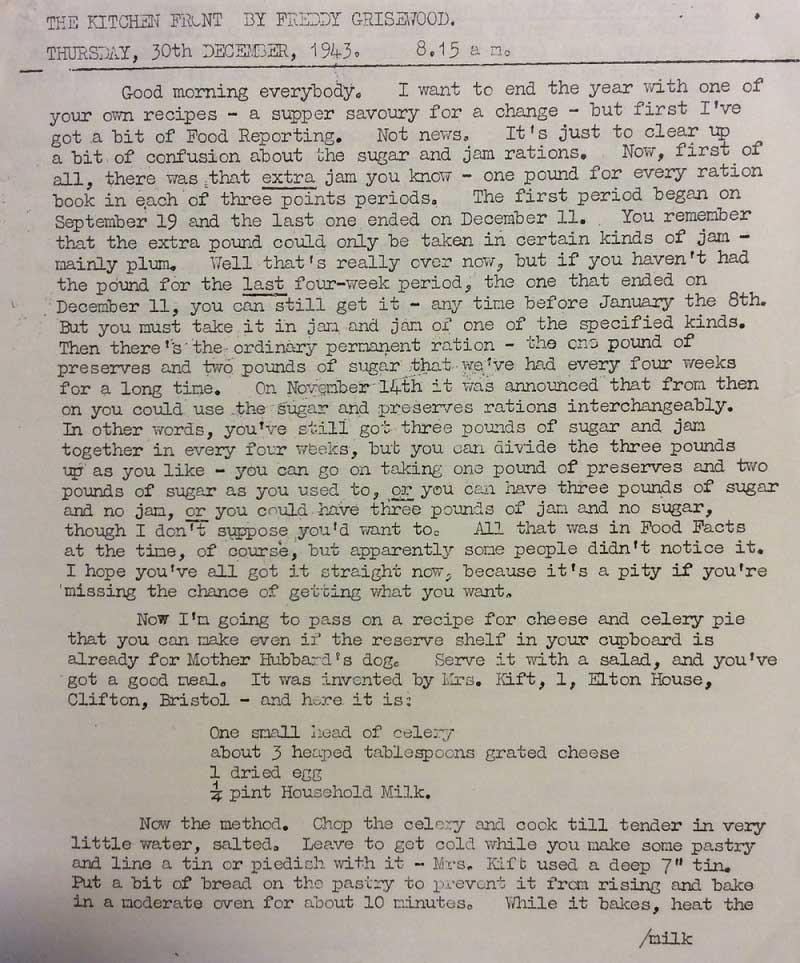 The government, recognising this added burden, aided women by producing a Kitchen Front broadcast that aired on the radio every morning, which divulged new, experimental recipes and provided updates on food news for the day (catalogue reference: MAF 102). Recipe booklets were also produced and included all sorts of weird and wonderful ‘gourmet’ menus! Our war cookery calendars show the range of recipes from giblet patties, mock goose, ‘Emergency Bread’ for ‘unexpected visitors’ and even stewed brain. For more on wartime recipes, see our next blog when we are even going to have a go at cooking (and eating!) some of these creations…

‘Rationing in the Second World War’ tends to evoke images of long-suffering deprivation and deficiency; of well-scraped soup bowls, skinny sandwiches and scrawny carrots – the recipe for stewed brain perhaps testifying  to such images! But was rationing all bad?

For some families, the Second World War brought positive changes to their nutritional intake. Before 1939, working-class families consumed just half the calcium of better-off families, and much less than was required for good health. 1 During the war, however, the wide availability of milk and the fortification of flour with calcium meant that the diets of almost all civilians, regardless of class, contained at least the recommended daily allowance of 1000 milligrams of calcium. 2 A similar positive effect was found in the Government’s Vitamin Welfare Scheme for children, which supplied under-fives with a portion of orange juice every day (catalogue reference: INF 13/194). 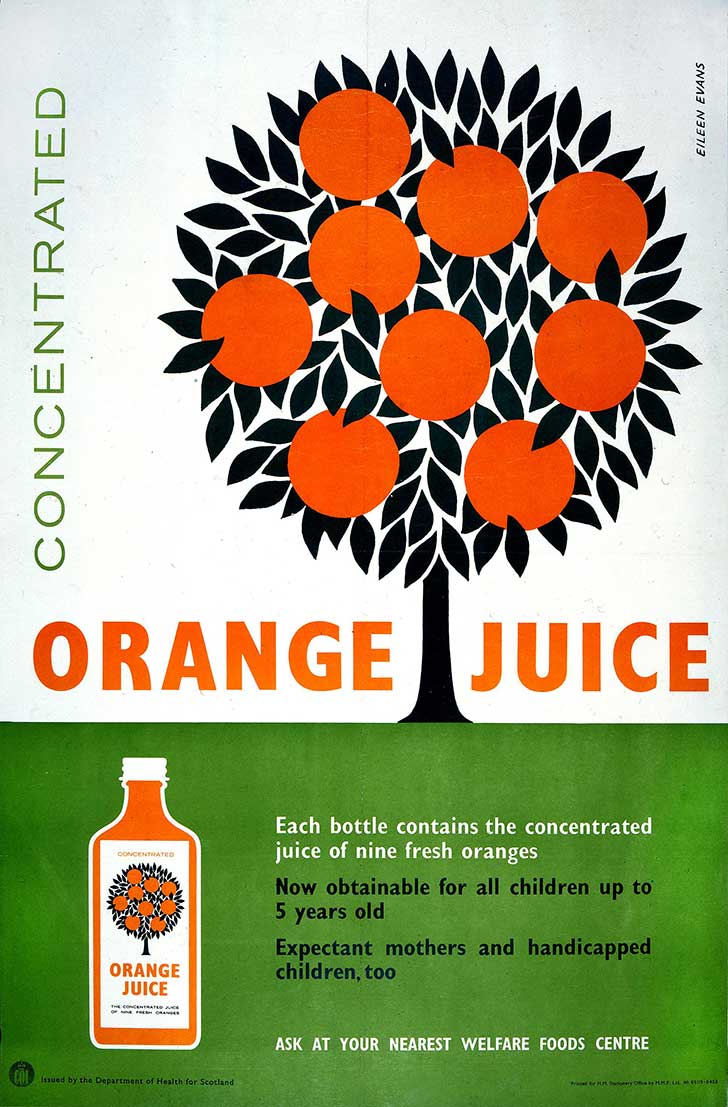 So, is there a case to argue that an examination of food in the Second World War reveals a breaking down of social division, a levelling out of privilege? 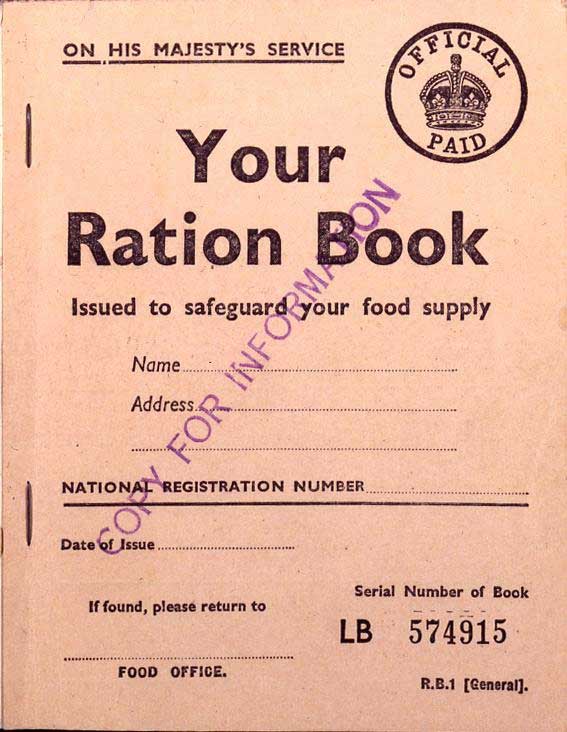 Certainly, there is evidence to suggest that rationing was widely accepted by the public, as it was viewed as a way of sharing the burden fairly amongst all citizens (catalogue reference: RG 23/9A). ‘Fair shares’ was a key preoccupation of the government, with records here showing that the Cabinet – learning from the First World War – was keen to avoid ‘inequality of distribution and high food prices’ as two ‘potent factors of trouble’ (catalogue reference: CAB 75/27).

However, challenges in achieving fair food distribution are evident throughout the reports of the Ministry of Food, which compiled summaries of media coverage on the topic of rationing. Here, the north/south divide is evident in The Yorkshire Post’s report on the rumoured existence of much sought-after bananas in shops in the south of England, in contrast with their equivalents in Bradford and the surrounding area (catalogue reference: MAF 102/146). Another issue was that of the struggle of wives and mothers who worked in factories. Their busy working schedules prevented them from reaching the shops before stay-at-home wives, whose flexibility allowed them to visit the grocer, butcher and baker to purchase the choicest vegetables and cuts of meat before their working counterparts (catalogue reference: INF 1/293). Thus, while many hoped that rationing would be a burden shared fairly, it’s clear from our records that, for some, divisions still ran deep.

By looking at food during the Second World War, a lot can be learned about wartime society – the good and the bad! This blog has touched upon the ‘double burden’ of working and feeding the family that more women than ever before faced, and how rationing was perhaps beneficial to the lower classes. So, the next time you pick up a snack from the supermarket, head to a farmer’s market or upload a photograph of your dinner to social media, think about what this tells you about life in 2016.

We hope that this blog has convinced you that food in the past is a topic worthy of the attention of archivists, researchers and historians – and you! Not only that, but we think it is crucial that all children and young people have the opportunity to learn about food in the past. Why? Well, food and drink is something that we all have in common. Everyone, from medieval queens to soldiers in the civil war to Victorian school children felt hungry, and everyone has sought nourishment in one form or another. At the same time, food and drink is profoundly historical, linked inextricably with the period in which it was consumed.

The British Home Front during the Second World War is better understood through its food, and we’re eager to share this learning with our local families. Come along to our Family Learning Trail on Saturday 6 August to learn more about food and drink in wartime. You’ll get the chance to explore some of our original documents and even try your hand at some wartime food production. Places are limited so please book now: www.eventbrite.co.uk/e/potatoes-in-bread-and-other-delicacies-tickets-25905563237